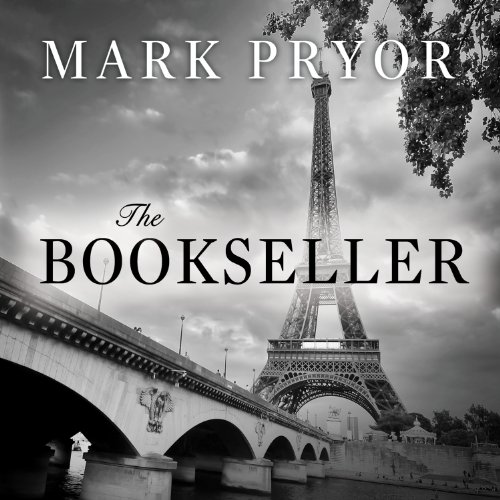 Max - an elderly Paris bookstall owner - is abducted at gunpoint. His friend Hugo Marston, head of security at the U.S. embassy, looks on helplessly, powerless to do anything to stop the kidnapper. Marston launches a search, enlisting the help of semiretired CIA agent Tom Green. Their investigation reveals that Max was a Holocaust survivor and later became a Nazi hunter. Is his disappearance somehow tied to his grim history, or even to the mysterious old books he sold?

On the streets of Paris, tensions are rising as rival drug gangs engage in violent turf wars. Before long, other booksellers start to disappear, their bodies found floating in the Seine. Though the police are not interested in his opinion, Marston is convinced the hostilities have something to do with the murders of these bouquinistes.Then he himself becomes a target of the unknown assassins.

With Tom by his side, Marston finally puts the pieces of the puzzle together, connecting the past with the present and leading the two men, quite literally, to the enemy's lair. Just as the killer intended.

What listeners say about The Bookseller

The summary is a spoiler that muddles

Purchased this as Whispersync through Book Gorilla.
Forget the summary; it skews the timeline.
Simply take Paris, American Embassy security chief on vacation,a good friend who is bookseller, rare books which are not what they seem, a reporter who is not what she seems, local cops who are not what they seem, an old friend who is CIA retired, and several murders. And be prepared to become addicted to Hugo Marsden's way of things (with plot twists).
Michael Prichard does a fine job of differentiating characters and adding snark.

My great disappointment is that there are no more of this series available on audio!

This is a compelling story set in Paris. Just wish the whole series was on Audible, and that the narrator was more like David Collaci, a personal favorite.

I enjoyed the Bookseller. My first time reading this author.
Hugo and his counterparts made for a good team and
story. It just moved a little slow.

If you enjoy a book that takes its time getting there,
then this will be a nice leisure, read. Nice and tidy
wrap up at the end. With just some minor twists.

Yes, I will read the next, when\if available. [Smile]

When was this written?

The history and visual descriptions of Paris were cool but I felt like the characters came out of the 1950s. The main character couldn’t so much as look up a phone number without calling his secretary and it didn’t help that the narrator sounded like he was broadcasting a sports event over the radio from the 50’s. The inflection was terrible. I was hoping this series would replace Louise Penny’s series since I have read them all but nope.

Good, solid beginning for a series.

Mark Pryor crafts a mystery from seemingly unrelated murders, rare book intrigue, corrupt police, and drug trade in Paris. Hugo Marston, who works for the US Embassy, gets pulled in when a friend disappears and the police abruptly close the file. The twisted trail through the disparate clues and, initially, the lack of belief/cooperation from the police make for several mysteries that eventually are sorted out and wrapped up.

This is a good beginning installment for a series; I hope the next two books are on Audible soon.

I was not familiar with this narrator, but his performance is more than adequate.

Good story in a lovely setting

I enjoyed the author's portrayal of Paris, and especially the background of the booksellers. Who knew that the folks selling used books along the Seine were part of a long, long tradition, and the spots were so difficult to come by. The story was good, too, and overall I liked that as well. What interfered in the full enjoyment was the reader., Michael Prichard has a great voice and there was nothing inherently wrong with his delivery. The problem is that his voice sounded considerably old relative to the age of the book's narrator and this made the listening somewhat jarring.

The narrator's voice was grating and abrupt--like an old man calling a baseball game . . . It took me a while to get past that and appreciate that he did know how to pronounce French words.

Would you listen to The Bookseller again? Why?

No, I would not listen to this again - too many books and too little time!

What was one of the most memorable moments of The Bookseller?

The Nazi - Jewish background and its part in the story line

What does Michael Prichard bring to the story that you wouldn’t experience if you just read the book?

Listening always adds to the dramatic effect of a story.