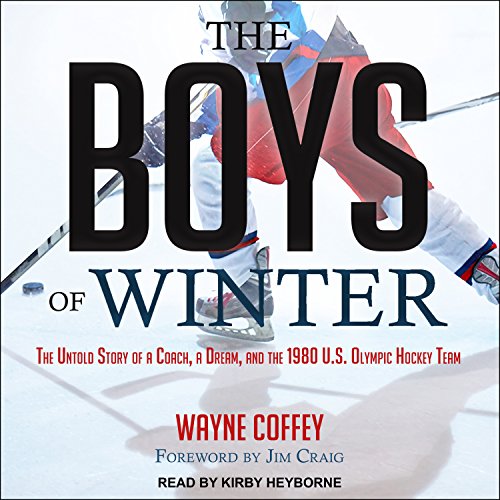 The Boys of Winter

Once upon a time, they taught us to believe. They were the 1980 US Olympic hockey team, a blue-collar bunch led by an unconventional coach, and they engineered perhaps the greatest sports moment of the 20th century. Their "Miracle on Ice" has become a national fairy tale, but the real Cinderella story is even more remarkable. It is a legacy of hope, hard work, and homegrown triumph. It is a chronicle of everyday heroes who just wanted to play hockey happily ever after. It is still unbelievable.

The Boys of Winter is an evocative account of the improbable American adventure in Lake Placid, New York. Drawing on hundreds of hours of interviews, Wayne Coffey explores the untold stories of the US upstarts, their Soviet opponents, and the forces that brought them together.

What listeners say about The Boys of Winter

This book provides phenomenal additional depth to the story of the 1980 gold medal winning USA hockey team. You will not be disappointed.

The one bad part (and this might just be nitpicking) is the narrator mispronounces just about every hockey term, and Russian name throughout the entirety of the book.

Obviously this story needs little help. The author does a great job diving deep into the people involved and fleshing out many details. The narrator is brutal. He has a sort of sissy lisp. He obviously doesn’t know hockey as many of the terms are savages. IE blue line is one words, not two. It’s obnoxious after hearing it over and over. Plus his efforts to jazz up the Soviet names is pointless and distracting.

Do You Believe in Excellence? Yes!

I initially read the book when it was published (and still have it). My son asked for a good book to listen to on tape. Because he started playing hockey a few years ago, I suggested he do a search to see if this book had an audio edition. He really enjoyed it and I decided that I would listen to it also.

I was a sophomore in high school and was the only female who dared to play ice hockey with my brothers and their friends on “the pit”. This book brought back fond memories of those times. We watched In February 1980 on a Friday night with as many friends of ours that could fit into our living room the “Miracle on Ice.”

Coffey does a wonderful job of weaving the stories of all the players and coaches lives both before and after the “miracle.” He glides in and out of the details of each person’s life as though he were a skater on the ice handling the puck and directing the story where he wants it to go.

It is heart warming and at times heart wrenching to learn of those details. In 1980 we took pride in the boys of the 1980 Olympic Hockey team. After reading this book, I gained an even deeper appreciation for all that they endured both on and off the ice before, during, and after 1980.

WARNING: SPOILERS AHEAD... THE AMERICANS WIN

What made the experience of listening to The Boys of Winter the most enjoyable?

This event combined with a phenomenal sophomore NHL season by a guy named Wayne Gretzky helped turn me into a huge hockey fan. I thought I knew this whole story by heart. i was wrong. There was so much I didn't know. I knew the players by number, position, and school, but I never knew the men behind the uniforms. This book gives great insight into them by using a very clever framing device. it will appeal to both the casual fan who may not have been around to experience the "miracle" and to the sports know-it-all.

The storytelling was really well done. It sounds corny, but I actually got chills as the final seconds of the game ticked off.

Have you listened to any of Kirby Heyborne’s other performances before? How does this one compare?

Heyborne did a pretty good job, but after only a few minutes of listening it became very evident to me that he knows very little about hockey. He paces well and gives the text a lot of flair, but each time he said "blue line" as two separate words I would lose my mind. Hulk would have smashed his iPod.

It makes me smile. It's just a wonderful story about a bunch of college kids who were able to defeat the greatest team in the world.

Good story for a hockey family to listen to on a long trip.

Get someone who knows hockey

I don’t know what is worse; having someone narrate a book about hockey and get names wrong and not know how to pronounce them or say Blue Line… ( like it’s two words) or no one catching it before hitting the send button!!
What an insult to hockey fans!

I really enjoyed this story and the results that we all know, but it was very interesting to hear the back story on all the players and coaches. Overall very good, the only issue I have is that the narrator, who does a fantastic job at pronouncing the Russian players had trouble pronouncing various hockey terms, for instance, when talking about the blueline or redline, it was pronounced blue.....line and red...line. Hockey people will know what I'm talking about, but enjoyed the book no-less, except for this. Thanks

This is a great story. With really good behind the story Info. I would be more than willing to read/listen to more from this author and voice actor! However I think this particular book doesn't translate as the best to audiobook! I would and will refer this book to family and friends who want to go deeper into the legendary 1980 U. S. Olympic hockey team!

This book went into great detail about the game between the USA and USSr in The Mracle on Ice from the 1980 Winter Olympics. I found it to be a very enjoyable walk down memory lane.

This book was so engaging. I listened to the first 2 hours while on a very long, late night drive and it kept me awake and engaged. Heyborne does a wonderful job narrating and Coffey wrote an amazing book. I enjoyed the layout, and liked getting to know the players one by one, both on and off the ice, and before and after the big game. A must listen for any USA Hockey fan!

I have to echo what others have said about the reader. How can audible let this happen? They have people recording these books, why not have someone verify the pronunciations? It's pretty simple, blue line is one word in hockey, the Russian 'accent' was distracting, and it really took away from the the story at times.

Now that's off my chest, this book was wonderful! If you think you know everything about the 1980 olympic team, you probably don't! I am a huge hockey fan and I learned a great deal about the team and it's personnel from this book. The book is broken down into periods, much like a game and it jumps around quite a bit from player to player, but I knew enough of the story, it didn't bother me. Watch the movie 'Miracle' and then read this, it will help a good deal.

If you are an American ice hockey fan, this is a must listen!