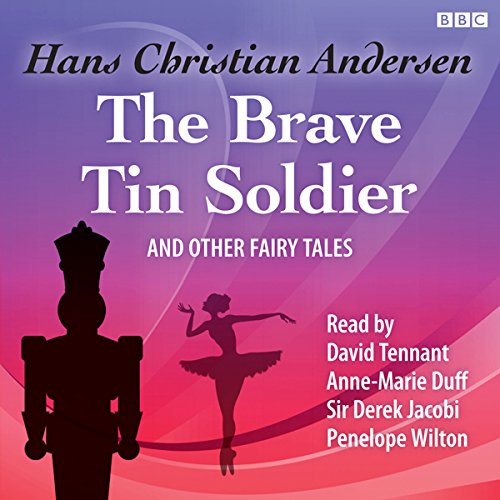 Here are four of Hans Christian Andersen’s best-loved short stories, specially adapted for young children and read by some of Britain’s most well-known actors.

The Brave Tin Soldier read by David Tennant: A one-legged toy soldier falls in love with a paper ballerina.

Thumbelina read by Anne-Marie Duff: A tiny but beautiful girl grows from a barleycorn which has been enchanted by a witch.

The Nightingale read by Sir Derek Jacobi: An emperor prefers a sparkling mechanical bird to the song of a real nightingale.

The Ugly Duckling read by Penelope Wilton: A little bird is called ugly by others until he matures into a beautiful swan.

Would you consider the audio edition of The Brave Tin Soldier and Other Fairy Tales to be better than the print version?

Yes. David Tennant performance was of course as spectacular as his theater and TV performances.

The voices were all wonderful

I cried at Brave Tin Soldier

Nice to listen to, but clipped

The voice acting is lovely, as are the sounds and music. The stories are, however, abridged a great deal, which can be frustrating if you're a purist. (But they're fun.)

I loved this collection of stories, especially The Brave Tin Soldier. It's dark, beautiful and marvelously narrated. I highly recommend the audio book.