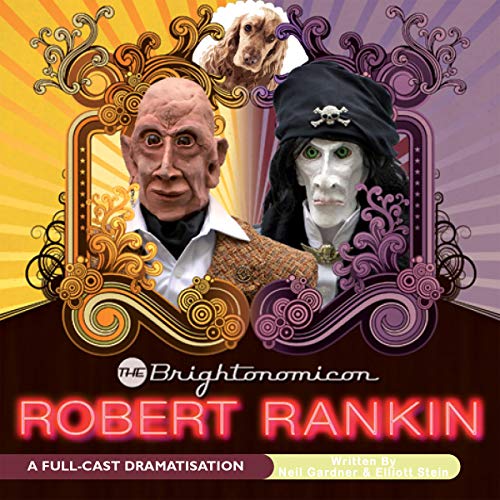 This is the tale of two incredible people - one who knows he is incredible and the other who learns to be incredible. Set in 1960 in the UK south-coast resort of Brighton, self-styled guru and magus Hugo Rune rescues a young man from drowning and persuades him to become his assistant and partner in solving 12 mysteries.

Rizla (for such is the young man’s assumed name) agrees to help as he has lost his memory and has nowhere else to go. There then follows 12 of the most baffling, surreal, exciting, head-scratching and downright far-fetched mysteries ever written...all based in and around the suburbs of Brighton.

In between the adventures our heroes are able to enjoy the bizarre surroundings of Fangio’s pub, where the bar lord is always happy to talk some old toot and occasionally some exposition as well.

Across the mysteries Rizla and the audience learn about the Brighton zodiac, the chronovision, time travel, centaurs, a dastardly plot where the NHS kidnap vagrants for body parts, space pirates, the real history of Victorian Britain, Brighton pirates and the fate that awaits mankind should Hugo Rune fail in his task.

And of course, there’s a very bad man involved indeed - Hugo Rune’s archnemesis of the ages, Count Otto Black - who wants to rule the world (what else!)

What listeners say about The Brightonomicon

I liked the book...premise, author skill, and narrators BUT even after a few tries with different speakers on/ with my Android I couldn't hear the dream sequence dialogues and believe I missed information that was important to the story. It's introduced me to a new author and I will gladly to get the actual book to see what I missed.

I feel like watching an exciting, amusing show. The story is interesting. I am certainly glad I've bought this audiobook.

The best thing about this Audible production is the full cast. While there are some funny lines, this farcical narrative gets tiring quickly. I almost made it to the end, but then thought, why bother. Fortunately I got this on sale.

If you have only just heard of Robert Rankin this dramatization is a great introduction to his work, his particular humour, and the wider stories that connect to the characters involved... As a long term fan of Rankin, for me, this is an essential addition to the collection. I first heard this when it was initially broadcast on the radio and it left a big impression, it is broken up in to handy episodes/chunks but chances are you will want to listen through from start to finish. It is well performed and well produced. I cant recommend it enough!

Totally brilliant, engrossing, stupid, written by a man with a warped brain. Sell your children, sell your body and your partners, just get the money to buy this.

A tad disjointed and inconsistent.

Entertaining to a point, but would have been improved if all the intros had been removed and episodes convincingly joined up.

I just could not finish this. I really loved the books that proceed this one. I should have stayed in Brentford, clearly Brighton does not suit me.

David Warner and an incredible cast do the most wonderful job of bringing to life one of Rankin's best books.
Just the most fun, and full of lovely/crazy ideas. Somehow Rankin makes real drama and comedy from a mush of old schtick and in-jokes, and evokes warmth and wonder, genuinely gripping you, by swallowing them whole before your very eyes.
Never boring, the sound design is beautiful and the music transporting and engaging.
Andy Serkis is well worth waiting for as the scenery munching Count Otto Black, and David Warner is now the only man I can see playing The Greatest Man Who Ever Lived
Joyful :)