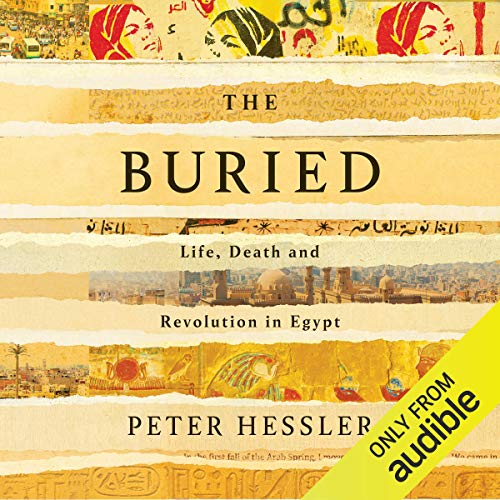 In 2011, the world's eyes were on Egypt as revolution swept across the country. But what lay below the surface of events was harder to see. Living in Cairo, over the following years award-winning writer Peter Hessler set out to uncover the everyday lives and archaeological secrets of a country in turmoil.

From the protests in Tahrir square, to Egypt's first democratic elections, and on to the massacres, the coup and its aftermath, The Buried follows the ongoing events of the Arab Spring while also exploring the social forces and historical context behind it. At its heart lies human stories: iconoclastic Pharaoh Akhenaten, rubbish collector Sayyid, Arabic teacher Rifaat, Chinese lingerie salesmen and resourceful archaeologists.

Together, they raise the question: is revolution just repetition, or can things really change? Through extraordinary firsthand reporting and deep research, Hessler brings to light the relationship between the ancient past and the contemporary condition, the political and the personal, to create an unforgettable work of literary and documentary brilliance.

What listeners say about The Buried

Initially found the long background study of Egyptian politics to be wearisome but it is well worth pushing through early chapters as it is necessary to get a complete understanding of the context for the revolution.

The real strength of ‘The Buried’ lies in Hesslers ability to bring to life fascinating and hilarious quirky Egyptian characters. The illiterate garbage man feuding with his educated wife. The ornery socialist Arabic teacher.
Hessler has a keen sense of humor while crafting a satisfying and interesting narrative.