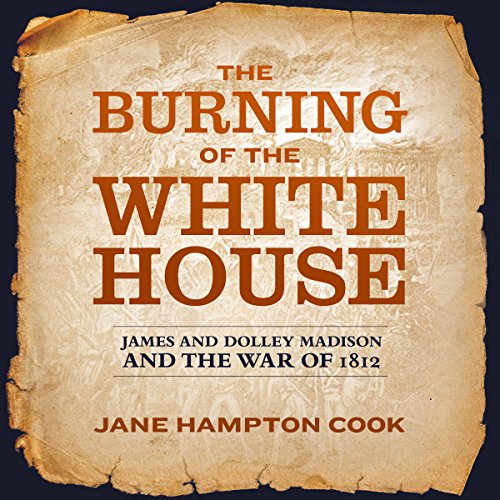 The Burning of the White House

Told from multiple points of view - including those of James and Dolley Madison and a British admiral - this is the true story of the burning of the White House in 1814.

Relying on firsthand accounts, historian Jane Hampton Cook weaves together several different narratives to create a vivid, multidimensional account of the burning of Washington, including the escalation that led to it and the immediate aftermath. From James and Dolley Madison to the British admiral who ordered the White House set aflame, historical figures are brought to life through their experiences of this unprecedented attack.

The Burning of the White House is the story of a city invaded, a presidential family displaced, a nation humbled, and an American spirit that somehow remained unbroken.

Good book. If you don't have a background on the War of 1812 this book will give it to you.
Story rambles and gets lost sometimes but usually comes back to where it's supposed to be.
Narrator is okay. She tries different voices but the men all sound the same.
I would recommend this book.

History Buffs Rejoice! This is the real War of 1812.

The War of 1812 is perhaps the least studied, understood and appreciated war in which our Nation has been engaged. By burning the White House and our Capitol to the ground, the arrogant Britsh admirals and generals, who thought the United States could easily be retaken, enraged even Americans who had been ambivalent up to that time. The rest is history, and it is well told, indeed, as if you were there. Nicely woven into this story are the many well researched and documented events and anecdotes about America's 1st First Lady, Dolly Madison, a truly remarkable and courageous woman, and her President husband, to whom she supported and was unwaveringly loyal, even as she was left alone to rescue the irreplaceable treasures of the White House.

This book reads like it was written for a nine year old girl, should have been titled "Dolly Madison, the Most Nicest Person Ever, and Other Super Swell People!" I don't think the author meant to write it like that, I think she is an amateur and apparently so was her editor. Very weak book, nothing anyone accustomed to reading good history would like. Never should have been published, unless as a children's book. And my gosh she overused the "phoenix" analogy so much it was embarrassing, ugh. Big waste of time.