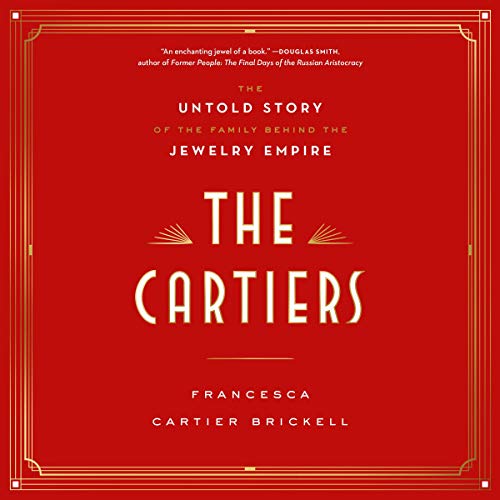 The Cartiers is the revealing tale of a jewelry dynasty - four generations, from revolutionary France to the 1970s. At its heart are the three Cartier brothers whose motto was "Never copy, only create" and who made their family firm internationally famous in the early days of the 20th century, thanks to their unique and complementary talents: Louis, the visionary designer who created the first men’s wristwatch to help an aviator friend tell the time without taking his hands off the controls of his flying machine; Pierre, the master dealmaker who bought the New York headquarters on Fifth Avenue for a double-stranded natural pearl necklace; and Jacques, the globe-trotting gemstone expert whose travels to India gave Cartier access to the world’s best rubies, emeralds, and sapphires, inspiring the celebrated Tutti Frutti jewelry.

Francesca Cartier Brickell, whose great-grandfather was the youngest of the brothers, has traveled the world researching her family’s history, tracking down those connected with her ancestors and discovering long-lost pieces of the puzzle along the way. Now she reveals never-before-told dramas, romances, intrigues, betrayals, and more.

The Cartiers also offers a behind-the-scenes look at the firm’s most iconic jewelry - the notoriously cursed Hope Diamond, the Romanov emeralds, the classic panther pieces - and the long line of stars from the worlds of fashion, film, and royalty who wore them, from Indian maharajas and Russian grand duchesses to Wallis Simpson, Coco Chanel, and Elizabeth Taylor. Published in the 200th anniversary year of the birth of the dynasty’s founder, Louis-François Cartier, this audiobook is a magnificent, definitive, epic social history shown through the deeply personal lens of one legendary family.

“Four generations of genius, glamour, and ambition are laid bare in Francesca Cartier Brickell’s behind-the-scenes account of the Cartier family. Part social history, part affectionate memoir, The Cartiers is a pleasurable stroll through the glittering byways of a more elegant age.” (Amanda Foreman, New York Times best-selling author of A World on Fire)

“Francesca Cartier Brickell skillfully traces her family’s astounding history through the contents of a weathered suitcase found in her grandfather’s cellar. The result is a fascinating account of the Cartier brothers and the creation of this iconic and enduring luxury brand. (André Leon Talley, best-selling author of A.L.T.: A Memoir)

“The Cartiers is the sparkling saga of one of the globe’s most iconic jewelry dynasties, beautifully recounted by a direct descendant of the company’s founders. With her insider’s understanding of the family business, a historian’s precision, and a novelist’s keen eye for personal detail, Francesca Cartier Brickell has created a seeming contradiction: an epic yet personal chronicle.” (Rhonda K. Garelick, author of Mademoiselle: Coco Chanel and the Pulse of History)

The most amazing story

Francesca takes you through the history of Cartier in novel like fashion. The story isn’t nearly a timeline and facts, but an escape of a story of how events came to be. The Precision, the care the style the design that went into every perfect detail of Cartier is laid out here. The book filled with anecdotes and journeys that will take you around the world meeting kings, queens, rulers and the most elite heiresses. A fascinating read up to the very last sentence..

Wonderful Experience to Listen to This Story

This is one of the rare Audible books I have listened to where I ordered two copies of the bound book for myself and a dear friend and I highly recommend doing so. The author has admirably covered several centuries of the Cartier’s responsible for the international company and their beautiful works of art. Having the genealogy chart and the many photos that are in the book make this listening experience even more wonderful. This is one of those rare occasions, however, when the narrator’s performance is so superb it is not to be missed. Plaudits to the author for doing such a great job of telling her family’s remarkable story.

I am both a history lover as well as a BIG lover of jewelry and this book checked all my boxes. Wonderfully researched, wonderfully written, and wonderfully read aloud by Hattie Morahan. This was a pleasure start to finish. Truly cannot recommend this book enough if you are at all interested in the topic

Fascinating, well-written, and even amazing.

Never would have imagined that a jewelry "store" had such a long and fascinating history. It's a real adventure to follow the lives of the Cartier founder, his sons and grandsons, their wives and children, and the many changes in society and the world they lived through. Never would have imagined so much went into designing, making and selling jewelry. Never realized the Cartiers provided some of the most extraordinary jewelry ever designed and worn by kings, queens, empresses, duchesses, maharajas...oh my! Not for years have I enjoyed a book so much.

If you live jewelry, history, or lord willing, both...you will enjoy this book. I purchased to book in hardcopy as well so i could read aling and enjoy the photos and illustrations. Very enjoyable.

Francesca Cartier Brickell has outdone the world of family history in an interesting and compelling way. Brickell unfolds the tale of generations of the Cartier family that will take you back in time. Fascinating story told by a delightful narrator!

I love the book. As exquisite as Cartiers creations. A fascinating account of the Cartier Dynasty and journey through history. Just wonderful.

LOVED this book.. so well put together from letters, interviews, historical artifacts. Cartier Brickell has written a marvelous book about her families luxury empire. I loved every bit, the anecdotes, the world history parts and everything in between.