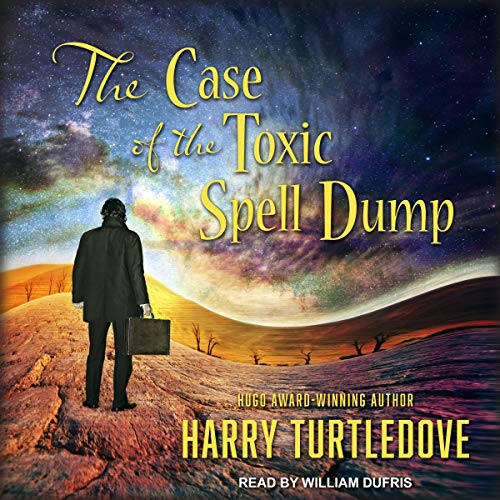 In an alternate America that runs on magic, a potential environmental disaster plunges an overworked bureaucrat into a deadly conspiracy of evil gods and darkest sorcery.

David Fisher pushes paper for the EPA in a world that's a lot like ours...only different. In this California - and throughout the alternate United States - all gods are real, science doesn't exist, and magic rules everything, running imp-driven computers and creating anxiety-inducing bumper-to-bumper flying-carpet rush hours. Unfortunately, unchecked magic use can leave dangerous residues, creating hours of mind-numbing deskwork for David and his fellow bureaucrats at the Environmental Perfection Agency. Now a leakage at a toxic spell dump in Angels City is about to complicate David's life in ways he never imagined, unleashing vampires, werewolves, and soulless babies. Even the actual spooks at the CIA are concerned. But looking too closely into what might be more than just an accident could have David stepping on the toes of some very nasty deities indeed, imperiling his future on the Other Side...and on this one, as well.

When it comes to creating alternate histories - and worlds - no one does it better than the great Harry Turtledove. The multiple-award-winning master of the fantastic carries listeners on a droll thrill ride through a richly detailed, ingeniously imagined fantasy reality where the impossible is mundane - and absolutely anything can happen.

What listeners say about The Case of the Toxic Spell Dump

This is a story about a world where magic is very real. The lead character works for a government agency, much like the EPA, and discovers a terrible problem. Evil magic is leaking from a toxic spell dump where residue from creating magical products is disposed of. The story moves along and is fun along with having serious dilemmas that have to be solved. I didn't find it to be predictable. As usual, Turtledove's wonderful sense of humor is evident throughout the book.

Please write more of this!

This is the best story by Harry Turtledove I have seen yet. Please continue this series

I fell in love with it in print and love it in audio. want sequel

This was an original story that was enjoyable and entertaining. This was also an intriguing and amusing way to stress the importance of environmental protections without being off putting or preachy.

Hope he writes in this world again