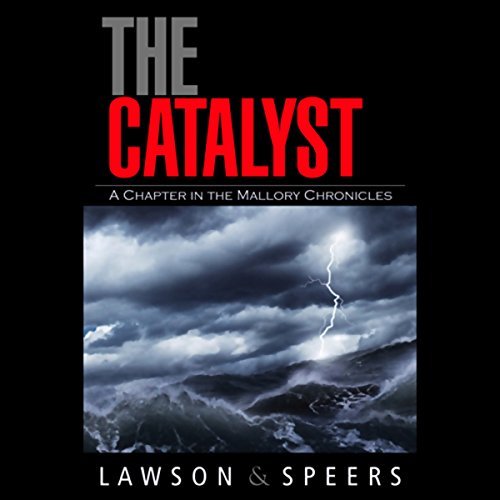 When Ensign Deke Mallory is deployed to the Mediterranean at a crucial Cold War juncture, the fledgling Navy fighter pilot falls for a winsome Spanish girl - and under the spell of a rogue Navy Ace whose mutinous plan to flame their MiG tormentors violates the president's peace initiative.

But the real threat to peace is lurking off-stage, in Bosnia-Herzegovina, where a fanatical ex-Nazi SS unit has gone to ground with an insidious ruse guaranteed to trigger the superpowers' "mutually assured destruction". Rising CIA analyst Terry Truman must bet his career to confront the president based on hunches, but only Deke Mallory's mettle can prevent Armageddon - if he survives to launch the kind of legend he'll become.

What listeners say about The Catalyst

The narrator, Patrick Macnee, used to have a wonderful voice and things he read in the past have been good. However, age seems to have caught up with him and his voice has taken on a reedy, nasal tone that is something of a distraction.

This is compounded by the recording being done in a room with a noticable echo. Little or no post-production work appears to have been done on this recording and the sound quality distracts greatly from the content. The quality was so poor that I had to stop listening after less than an hour.

I could not recommend that anybody purchase this particular recording based on sound quality alone.

I agree with the other two reviews. I also purchased all three of the books, and have not been able to get through them due to the narrator. He is almost monotone and sometimes seems to be yelling at the listner. I also have hundreds of audible books, and feel that I wasted my money with the purchase of these books.

The subject and content (as far as I got) were interesting but the reader's style is very distracting. He pauses in inappropriate places and doesn't pause when he should. He emphasizes words that shouldn't be emphasized and doesn't emphasize words he should. And most distracting he changes characters with no change of voice and without the slightest pause. I stopped listening half way through part one - it was too annoying to continue.

As far as I can tell, this story is great, BUT listening to the narrator is almost painful. He reads with almost a flat monotone, when it's not a monotone, the words or syllables are accented wrong. No differentiation between characters, terrible phrasing, dialogs between characters are extremely difficult to figure out, the sentences just run right into each other, with barely a breath. And when he DOES take a breath, it noticable, and there's even occassional "lip smacking".

Take some advice, and DO NOT download this book. What really upsets me, is I bought all 3 books and they are ALL narratored by the same guy.

I have over 200 audible books, and this is my first disappointment.

Get a Better Reader

Good story, but it is totally destroyed by the reader. It sounds like a drunk old man with a English accent relating a story from the great war. Please enjoy the story, but you have to get past the reader.

The Catalyst - A Winner

A masterful book with great twists and turns filled with strong characters and amazing attention to military detail. Makes you feel as if you are there on the flight deck.

My take on the narrator is that he flies as high as the pilots in this story. A true storyteller with years under his belt, Patrick Macnee lends a European panache to this highly American story. I'm buying the other two books in the series!