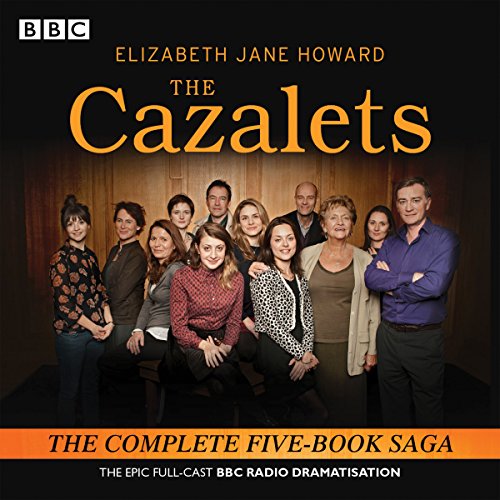 During the course of The Light Years, Marking Time, Confusion, Casting Off, and All Change, the progress of their lives, and those of their children, will be charted. As their stories unfolds we gain a vivid insight into the lives, hopes, and loves of three generations during the Second Word War and beyond.

Dramatised by Sarah Daniels and Lin Coghlan, and with a large cast of actors across all five books, this remarkable radio event adds a new dimension to Elizabeth Jane Howard’s extraordinary chronicles. The first four Cazalet novels sold over a million copies, with the fifth being published in 2013, shortly before the author’s death.

What listeners say about The Cazalets

If you've never met the Cazalets, let this be your introduction. And if you have, you'll love returning to Home Place to see them all again. The casting is perfect: every performance was distinctive, powerful, and absolutely top class. It was enjoyable to hear the ever-ladylike Penelope Wilton's narration throughout. It is a bit of a soap opera, of course, and rather melodramatic in parts. (I would have liked deeper characterization in several places). But what a story! It has everything: war, peace, love, desire, denial, regret...all of human life. You won't forget these characters, nor "Home Place" the estate that is, if you will, a character in itself. Highly recommended to those who love a sweeping family saga, and to all who enjoy hearing BBC Radio at its very best.

If you like the books, you will love this. Even if you have not read them, you will enjoy this if you like soap opera take things. Not everyone does. Anyway, this was very well done.

What an incredible journey into the minds and hearts of this family! What an amazing exploration of life and the complexities of human emotion! Wonderfully performed by a gifted group of actors whose voices were able to evoke intense emotional responses, while painting a beautiful series of canvasses depicting each scene, or creating full colour snapshots to be displayed montage-style on the giant HDTV screen of my mind's eye. I heartily recommend this collection to everyone. Cautionary note: once you begin, you will find it hard to stop listening until the very end. Any sleep lost will be worth it!

so well done. so much family detail in this story, its hard not to be completely hooked.

It was so enjoyable. The characters were just so good. It was nice to have a relaxing book to listen at bedtime. Thanks

enjoyed it immensely. Penelope Winston read beautifully .A family saga at an important time in life.

Lose yourself in this epic family saga

What made the experience of listening to The Cazalets the most enjoyable?

The story, it's always all about the story telling

What does Penelope Wilton and Full Cast bring to the story that you wouldn’t experience if you had only read the book?

Like snuggling up with a duvet and a box of chocs

What made the experience of listening to The Cazalets the most enjoyable?

What was one of the most memorable moments of The Cazalets?

Have you listened to any of Penelope Wilton and Full Cast ’s other performances? How does this one compare?

No not yet but I am looking forward to listening.

Numerous moments moved me. Although my hanky was used many times for sad bits, there is a lovely sense of hope throughout.

The Cazalets books are one of my favourite reads and this dramatisation is just wonderful.

I bought this after listening to a few chapters on the BBC radio app. It was amazing - it's set in the past but had timeless themes - love, adultery, family loyalty and teenagers trying to find their way. Absorbing, and hugely enjoyable. I wish that the story could carry on.

A woman's book, in my opinion, and I wish there were more like it. This is a many-faceted saga about the Cazalet family which I found totally compelling. The most intimate thoughts of every character are revealed; their reactions to the many problems that arise, their relationships, all are described with understanding and compassion. What obviously concerns this writer is how vulnerable people are exploited and even abused by the ruthless and selfish partners they often attract. This is a keeper!

Had not heard of the books before purchase and listened through numerous listenings mostly bedtime. Enjoyable .Narration by Penelope Wilton very much in keeping with the piece. I found it flowed well even with the stops and starts. I am now interested in listening to the individual books .

I loved listening to this drama. It was stylish and the voices were easily distinguishable from one another. There was a big cast and so it was very professionally done without the same actor taking more than one part which is sometimes the case in lesser dramas.

I'm only sad it's over as I shall miss the characters so much. Really a great listen. Don't hesitate you will love it. Thank you BBC.

I have read the Cazalet Chronicles so many times that the characters are like old friends. The adaptation is so beautifully abridged and acted that I think I will always hear these voices when I next return to the books.

A master piece of English old style literature perfectly performed & well acted. A wonderfully produced audible that I can listen to over & over and enjoy as much as the first time around. Well done to all. More like this please.

I didn't want this to end. I would like to know what happens next. I felt bereft when it ended. I loved every character played, even if I disliked the portrayed character traits. I wish there was more.