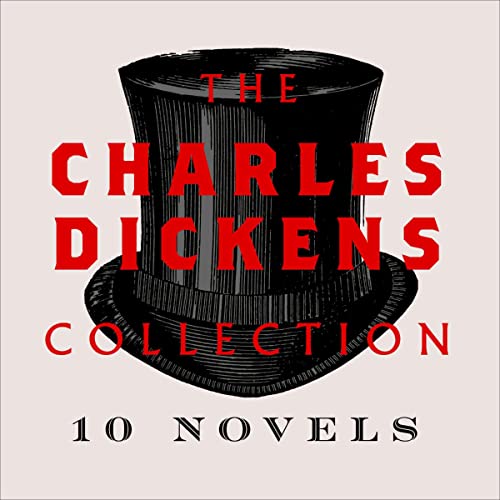 This audiobook includes unabridged recordings of 10 of Charles Dickens' great novels in one audiobook.

The novels included here are:

A Tale of Two Cities: a classic tale about two lovers caught up in the French Revolution.

Bleak House: a story about a endless court case over a disputed inheritance, and the lives destroyed by folly and a broken judicial system.

Great Expectations: one of Dickens' greatest novels, full of unforgettable characters such as Pip and Miss Havisham.

The Old Curiosity Shop: Nell and her grandfather are pursued by the evil hunchback Mr Quilp through a a grotesque London inhabited by eccentric characters.

Oliver Twist: the classic novel about Oliver the poorhouse boy, and his adventures among the London underworld.

Our Mutual Friend: Dickens' last novel, it is a sophisticated novel with a rare combination of social insight and psychological analysis.

Little Dorrit: following the life of Little Dorrit, the novel shines a light on the society and the government of the period and is a great work of satire.

Dombey and Son: a sprawling story following the complex relationship between shipping firm owner Paul Dombey and his daughter, Florence.

A Christmas Carol: Dickens' classic and sentimental novel about the ghosts of Christmas who help an old Scrooge find salvation. This story is credited with reviving the practice of celebrating Christmas, which had fallen into disuse in England, and has also spawned countless movie and television adaptations and rip-offs.

What listeners say about The Charles Dickens Collection: 10 Novels

I was so thrilled to find so many novels. But the reading is absolutely terrible, and the performances seem cartoonish, greatly detracting from the stories. I had to leave one of my favorite books bleak House because I couldn’t stand the characterizations. I can imagine the reader is talented in some respects, but I found it absolutely cloying To listen to her. Rather like biting on tinfoil .

I like many of the books in this collection, but the sound quality is quite bad. I couldn't make it through 5 minutes of listening to Bleak House. Unfortunately, Audible is not letting me return this title for some reason.

I was thrilled to get all these novels for only 1 credit. And the reader’s performance is wonderful using a different voice and accent for each character making it easy to picture the various scenarios. Cannot wait to find another author’s collection!

I'm so sorry, but I just cannot listen this man's voice. It sounds like it's computer generated. I downloaded these to listen to on holiday but foolishly didn't listen to a sample before doing so. Please listen before downloading. I'm so disappointed. Not for me I'm afraid.

This is an amazing collection which includes 10 of Dickens' best and most-loved novels. This is also completely tracklisted so it's easy to find which novel you want to listen to.

The performances are impressive - both narrators understand the nuances of Dickens' text and characters and bring his words to life with enthusiasm.

Getting all 10 novels for 1 credit is a true bargain so very much recommended!

Seven books not there

I heard three books, the others wont play. Where are they? Please help. Very frustrating. Don't know what to do to get help.