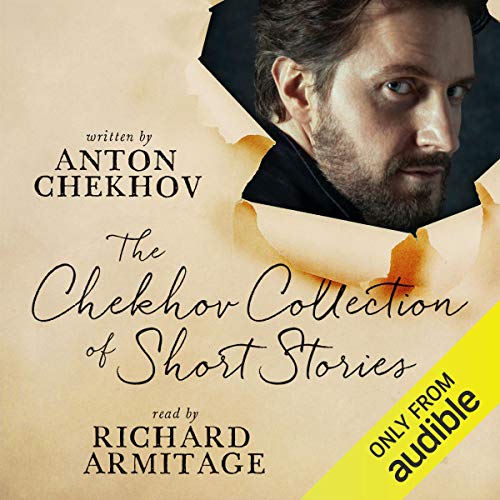 The Chekhov Collection of Short Stories

Whilst Anton Chekhov (1860-1904) is perhaps best for his plays such as Uncle Vanya and The Seagull, he was also a prolific author of short stories.

In this exclusive collection, Audible presents six of his most-celebrated short stories, chosen and performed by Richard Armitage.

Richard, whose interest in the work of Chekhov was sparked by his appearance as Astrov in a stage production of Uncle Vanya, also introduces the collection with a brief overview of each of the stories and his thoughts on why Chekhov’s short stories are not to be missed.

The collection contains the following stories:

In a mental asylum, a patient comes into conflict with a director of the institution.

During a party, a man becomes infatuated by a woman who accidentally kisses him in the dark.

A young woman strives to asset her independence by choosing education over an arranged marriage.

Is he a genius, or is he insane?

A beautiful young woman subverts society expectations by going to live with her neighbour, an older, married man.

A depressed young student has his spirits lifted by recounting an religious story to two strangers.

What listeners say about The Chekhov Collection of Short Stories

beautifully performed chekov's stories. there need no introduction for chekov . but it's a delight to hear the stories performed by an intelligent performer.

Finally, a collection of Chekhov stories that includes Ward #6! This story has haunted me for years, and it's always surprised me that it's been missing from so many audio anthologies. The fact that this collection also includes The Kiss and The Black Monk just makes it that much better. It's a small collection, with an emphasis on quality rather than quantity.

I've read a number of Chekhov anthologies, both in audio and in print, and there's one story here I hadn't run across before, called Neighbours. A brother has ridden off to confront his sister, who is living with a married man; but in this lovely and sad character study, things don't turn out the way he intends. I'm almost ready to say the anthology is worth buying for this story and for Ward #6 alone, but the others are all good choices as well. I believe it would make a good first choice for someone who wanted to explore Chekhov's range as a short story writer.

Richard Armitage is a wonderful narrator, and while I wouldn't have made the connection beforehand, his low, steady voice is a perfect match for Chekhov’s quiet, slightly off-center compassion.

Finding a single “best” anthology of Chekhov stories is an impossible task, especially in audio. You can make a good approximation, though, by combining this one with one or two of the others that are available. One title I would recommend is the Naxos anthology “In the Ravine and Other Stories” narrated by Kenneth Branagh: the two narrators make a brilliant pair, and there is no overlap in the selection of stories. If you're not bothered by having duplicates of some of the stories, I would also recommend the two Recorded Books anthologies “About Love and Other Stories” and “The Black Monk and Other Stories.” And of course there's the new 52-story collection translated by Pevear and Volokhonsky, but I haven't listened to that one yet.

The stories are broken out as separate chapters! Thank you! I don’t understand why all short story collections aren’t organized this way.

Other Side of Fear is Freedom

These Chekhov short stories have the dueling themes of angst and freedom. The characters struggle to balance both themes. Both socially(like a Solzhenitsyn commentary on the Soviets preferring insane asylums as imprisonment for dissident intellectuals),and humanly disturbing. Some of these themes are relevant to the current social events. Richard Armitage narration and voices are remarkable. His voices add to the richness and impact of the stories. The two stories has Richard Armitage sing a few words in a sweet and delicate voice.

I love Chekov, but the stories in this compilation except for "Ward 6," which is excellent, are unexpectedly weak and way too short to have an impact. Regardless of this crude view of mine of the stories, Richard Armitage's performance is superb.

There is humor in some of these stories, but little happiness. The overall effect of the stories would be a deep gloom, but for Richard Armitage's sensitive rendering of the many characters, giving the stories a strangely uplifting and almost mythological quality. With luck he may return to more of Chekhov in future.

Bravo, Bravo, Bravo Richard Armitage! You did Chekhov justice! Couldn’t ask for a better or a more enjoyable performance.

Perfect combination of author and narrator.

I have never read Chekhov before. In these stories, I’ve found a new favored author! Armitage’s performance was very enjoyable. I found him calming and compelling. I’ll be listening to this one again, maybe with a nice cup of tea or cocoa on an upcoming fall evening.

Discovering the world of Chekhov

My first encounter with Chekhov’s world and thoughts and the ancient Russia. He must have been an intriguing person. I loved the way he worked towards an inevitable end but with eye for the beauty in the world as he probably was experiencing it himself.
The narration by Richard Armitage was superb (as always). He’s so capable of giving every character his or her own voice. Definitely my favorite narrator

These six stories were chosen and performed by the only narrator who could do them justice. Richard Armitage's performance was haunting and mesmerizing.

good, but a little dark

Thanks to Richard Armitage introducing me to the works of Chekov. You can tell from the writing that Chekov experienced much pain in his life. and, as always, love Richard's voice. I would seek out more, but prefer more lighthearted stories.

There is more to Chekhov than his plays

Chekhov considered medicine to be his lawful wedded wife and literature to be his mistress. As well as the plays for which he is most celebrated, Chekhov was a prolific writer of short stories and this collection contains six of the best of them. The character descriptions are strong and we hear about simple hearted but dim witted peasants, dying men who are visited by phantoms and physicians in asylums who are as deranged as their patients. Apparently Chekhov wrote these works late in his life when he was suffering from consumption and this is surely reflected in the characters he creates who are stoic and crave the natural world.

The collection is expertly narrated by the actor Richard Armitage who explains in the prelude that having acted in Chekhov plays he wanted to find out more about who he was and I would recommend this to anyone who ponders the same questions.

Bought this after watching richard armitage in Chekhov's Uncle Vanya. Fabulously read and very intriguing plots. Next I'll be reading more of his plays.

What? Did Chekhov write in English?!!

Nowhere was the translator deemed worthy of mention even though they wrote the English being spoken. Audible/Amazon need to up their game. Then I will be happy to give a proper review

.Darkness of the writing was at times overwhelming and resonated with Covid times. The reading was good but could have been more nuanced. I had hoped for a more vital and gently humorous selection.

the stories of Anton Chekhov are brought to life through the excellent narration of Richard Armitage.

Had been wanting to explore Russian authors and loved this set of short stories by Chekhov. Simple, varied and real. Must listen to all those who love short stories.

I’d seen the production of Uncle Vanya but this collection of short stories was new. In a sense the circumstances are dated as are the characters but the human condition and emotions are timeless. It’s serious sober writing, with nightmarish scenarios which are intense and dark; of love, philosophy religion and disease, usually TB; an insight of Russia before the revolution. These are classics, compulsory reading for the committed but unlikely to reach mainstream again.

I am not really a fan of short stories but I have enjoyed productions of Chekhov plays, so decided to give this collection a try. I was not disappointed. Some stories are quite long, others are not. But all of them can be appreciated as mini classics, I think, and though they were written a long time ago they do not feel tired or dated. The writing is remarkably fresh, spare and insightful.

Richard Armitage is my favourite narrator and he does another superb job on this production.

I really enjoyed listening to these stories. Richard Armitage narrates them so well, with real empathy and nuance, bringing the psychology and emotions of the characters to life.

It was an interesting read and as always Richard Armitage's performance was outstanding.
Thanks Audible.