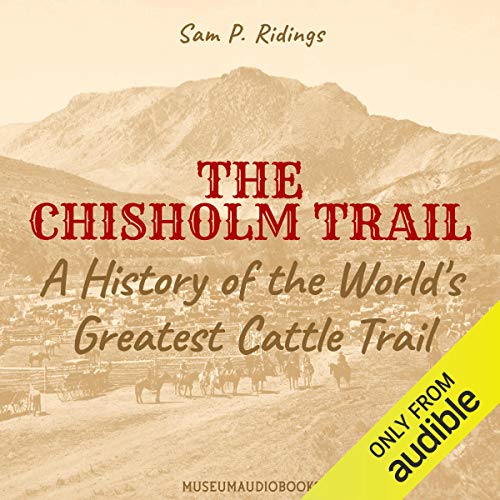 The Chisholm Trail: A History of the World's Greatest Cattle Trail

The Chisholm Trail was approximately 800 miles long, running from San Antonio, Texas to the shipping pens at Abilene, Kansas. This trail was an important part of the old west and part of the lives of thousands of cowboys of the 19th and into the early 20th century.

Millions of cattle and horses accompanied their drivers on the two to three month journey; its economic importance extended across the nation to the east as the livestock moved over this trail was headed to market to feed much of the United States.

The author presents a history of the trail, telling the story of the drivers, who struggled with Indian ambushes, stampedes and cattle rustlers. Some of the colorful characters associated with the trail include Charles Goodnight, Charles Siringo, and Joseph McCoy.

The narrator is very distracting due to his inability to pronounce, what I consider, basic words. If one is going to narrate a book about the Chisholm Trail, it would seem appropriate to get direction on the pronunciation of words such as Pecos, Arapaho, Cheyenne, bivouac, and others that are related to the books subject. It is really unfortunate because the topic is very interesting and the author actually lived this.