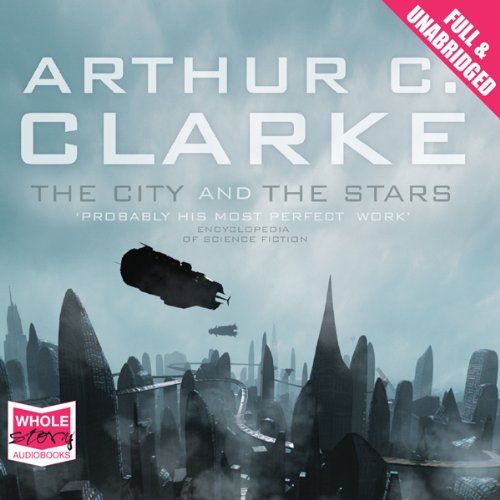 The City and the Stars

Men had built cities before, but never such a city as Diaspar; for millennia its protective dome shut out the creeping decay and danger of the world outside. Once, it ruled the stars. But then, as legend had it, the Invaders came, driving humanity into this last refuge. It takes one man, a Unique, to smash the legend and discover the true nature of the Invaders.

Ahead of its time

What did you like most about The City and the Stars?

An exciting story with a good pace. The main character becomes the hero in bringing about a monumental change on the planet.

What other book might you compare The City and the Stars to, and why?

I suppose it could be compared to an almost Star Trek type of story. Arthur C Clarke seemed to have similar ideas/ beliefs as Gene Roddenberry

What does Mike Grady bring to the story that you wouldn’t experience if you had only read the book?

He manages to bring feelings of excitement or sadness into reality

Yes, it was. I found myself walking around with it all day!

Great book, great author and exciting storyline. Arthur C Clarke wrote this in the late 50's I believe and his ideas of the future are extraordinarily accurate!

I can't summarise how incredible this story is.. or even hope to give you an idea of its scope of.. you will just have to listen for yourself. all I'll say is, this is easily one of the best sci fi novels I've ever experienced. and this audiobook version was epic

I didn't realise when I've started to read this book that it was written by Arthur C Clarke, there were so many twists and turns out was fascinating ... one of the best sci-fi books I have ever read.

this was my third book by Arthur C. Clarke. I must say, I preferred Childhood's End and Rendezvous with Rama, but this one was great as well. The narration sounded a bit old. in the beginning i wasn't too fond of it, but i got used to it as the book proceeded.

One of the greats

First read this book 40 years ago, it has lost none of its appeal and is as readable today as it was then. possibly my favourite sci fi of all time

Chapter numbers not synchronised although this took nothing away from a brilliant story. Clarke is a genius.

A book which gets better on every listen

for me it's about personal growth, Elon Musk, possiblity, courage and balance. Recommend for everyone

Still great over half a century on.

What made the experience of listening to The City and the Stars the most enjoyable?

Here is a world/galaxy so far in the future, crafted from the mind of one of (if not) the greatest Science-Fiction writers, that isn't a twelve part space-opera containing: death, politics, laser guns and numerous billions being eradicated on a whim; but a gradual unfolding mystery.

Which character – as performed by Mike Grady – was your favourite?

In-truth the story isn't like this, the whole book performed by Mike Grady is excellent.

Not moved as such, but it was fantastic hearing Khedron the Jester not able to cope with the fallout from his meddling and the extreme steps he takes.

If you're a classic Sci-Fi fan then I'd recommend you pick this up, though I suspect you already will have already done so.

A story that leads you along an intriguing path where the horizons of the story are ever expanding leaving the reader with many questions.