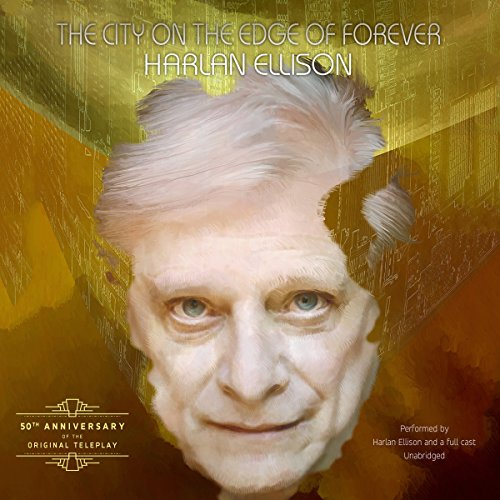 The original teleplay that became the classic Star Trek episode, with an expanded introductory essay by Harlan Ellison, The City on the Edge of Forever has been surrounded by controversy since the airing of an "eviscerated" version - which subsequently has been voted the most beloved episode in the series' history. In its original form, The City on the Edge of Forever won the 1966-67 Writers Guild of America Award for Best Teleplay. As aired, it won the 1967 Hugo Award.

The City on the Edge of Forever is, at its most basic, a poignant love story. Ellison takes the listener on a breathtaking trip through space and time, from the future all the way back to 1930s America. In this harrowing journey, Kirk and Spock race to apprehend a renegade criminal and restore the order of the universe. It is here that Kirk faces his ultimate dilemma: a choice between the universe - and his one true love.

This edition makes available the astonishing teleplay as Ellison intended it to be aired. The author's introductory essay reveals all of the details of what Ellison describes as a "fatally inept treatment" of his creative work. Was he unjustly edited, unjustly accused, and unjustly treated?

For a full cast/character list and table of contents, please visit www.SkyboatMedia.com.

What listeners say about The City on the Edge of Forever

Ok Harlan, we get it

Harlan Ellison is a gifted writer, no question about it, but he's also an obnoxious, vicious, bitter old man. The first half of this book was an hours-long rant by Ellison, who inarticulately mumbled his way through a multitude of reasons why Gene Roddenberry was a jerk, Shatner was a prima donna, and he, Ellison, got screwed by everyone (except Nimoy), all the while insulting any and all Star Trek fans who happened to like the version of his story that aired.

I've been watching Star Trek for all its 50 years. No one who really understands what the Star Trek Universe is about would dispute that Gene Roddenberry was not a perfect human being. We all know that Shatner is self-absorbed and loves...Shatner...most...of...all. But the point is we don't care. We love what Roddenberry left us. We loved how Shatner (and his fellow crew-mates) grew into their parts as the series moved beyond TV.

It's too bad that Ellison was screwed over by Roddenberry...and I understand his being pissed off about it, but it might be time to let it go...or at least restrict your rant to a half hour at the most.

All that being said, this book is wonderful...I said I was an Ellison fan. I loved hearing the original concept version of City on the Edge of Forever...the one that didn't get made, and while I understand why it was changed, and recognize that it was very un-Trek-like in its original form, I would have liked to see it produced.

If you like Star Trek and all the history surrounding it, then I recommend this book...listen to the rant by Ellison understanding that he is angry and bilious. There is a lot of interesting information in his tirade. Then, when it's over, you'll be treated to some great versions of one of his most interesting stories.

Lots of complaining but the story stands out

Ok, first of all there is a lot of fussing and complaining about how Harlan Ellison was treated by Gene Roddenberry, and how the original story was treated and changed before the show was filmed. It wasn't all bad because of all the information and details behind how this was made that was revealed. I can understand some of Harlans complaints but it seemed to drag on after a while. As for his original story, It was very good indeed, but not really Star Treky. I do agree somewhat with the revisions made and that they made for a better Star Trek episode. Multiple versions of the script are performed and you can judge for yourself. I did enjoy listening to the various versions and am glad they dropped the "space pirates".

If you enjoy listening to several hours of invective and venom before even getting to the story you thought you purchased, then go ahead and get this audiobook; if you want to hear several versions of the same story, purchase this audiobook. It is interesting to listen to, from the perspective of variations on a screenplay, but it is not really worth wasting a credit on.

Has The City on the Edge of Forever turned you off from other books in this genre?

No. Just turned me off from any book that includes any intro, prologue, forward, or other narrative in Harlan Ellison's voice.

Who would you have cast as narrator instead of the narrators?

I would have completely removed the Harlan Ellison diatribe. Completely ruined the book for me.

Re-publish the book, but separate the Harlan Ellison diatribe into a physically-separated "book" so that the listener can see just how much they have wasted on his invective against the "Star Trek legacy".

Author turned me off in an overly large intro

I wanted to hear Harlan Ellison's version, not a hostile blistering repudiation of Television rewriting.

Look, here's the deal. I have loved Harlan Ellison since before I was probably old enough to understand his wonderful prose. He was an inspiration to me in a number of ways as I grew up. This book though, isn't filled with any interesting insights other than a big "Fuck you" to Roddenberry, and implied insults to the reader if they prefer the version that aired.

Harlan, if you are reading this: let. It. Go. Jesus Christian man, do you think you are the only person who was fucked over by a job? You even came out of it ahead of the game, man. Two awards for two different scripts? Most beloved episode ever? Move on, dude. We all know you are brilliant, but also we all know that in 19-fucking-66 TV was much different. Roddenberry had to play by the rules or his show would get pulled. He made compromises, yes, but you got the credit and you got the basically story arc in place. And you know what? The telephone as filmed was pretty damned amazing. So, relax man.

mr. Ellison is justified in his complaints but it's a little bit too much.

Mr. Ellison is justified in his complaints but it's a little too much whining.

What would have made The City on the Edge of Forever better?

Less time listening to Mr Ellison drone on and on about how hard done by he was. The point was made in the first 15 minutes.

Would you ever listen to anything by Harlan Ellison again?

Yes, but only his written stories

The Actual Story Narration was excellent

Disappointment in how much time was wasted going over the same old news.

Save yourself some time and skip to where the narration of the original script and revisions begin.

Glad I Read It. Holly wired is Nuts

The fact that many people are included in putting together a full story that eventually ends up on the big screen is evident in most productions. It is interesting to see how an original concept is changed throughout the production process, how ego is involved, and how many people want to take credit for someone else's original idea. "The City On The Edge of Forever" my favorite Star Trek episode. In my opinion, and it is my opinion, what was eventually filmed was better than the original storyline. I did like the original concept and the original story, but I still hold that what ended up on the screen held to the Star Trek franchise and held true to the characters.

An absolute joy to listen to!

If you could sum up The City on the Edge of Forever in three words, what would they be?

What other book might you compare The City on the Edge of Forever to and why?

None. Harlan Ellison is one of a kind.

Better then the original aired episode, buy your ticket now!

Enjoyed so much about this audio book:
Ellison reading his own delightfully candid introduction.
The full cast giving life to the Award Winning Teleplay.

Mostly it's just having this treasure on audio.

If you could sum up The City on the Edge of Forever in three words, what would they be?

Fabulous casting. Odd thing, though. Why does the listing not show LeVar Burton, and Jean Smart and Stefan Rudnicki, and Scott Brick???

Several. Kirk and Edith love scenes. The Guardian of Forever sequences. And the end is so sad.

This is a valuable piece of history of Star Trek. AFter all, it is the 50th Anniversary this year. I loved the aired version, but feel that this version is worth hearing, too. Harlan's backstory is angry, but justifiably so. Plus, all the added essays and original materials. I liked David Gerrold's (The Trouble with Tribbles) take on the whole drama. I think the readers and casting is brilliant. But I'd like a full list, and I found one here: http://bit.ly/28W8G7c. It was worth a credit.

What an obscure thing.

I had the advantage of finding this Audiobook by searching for Harlan Ellison after having exhausted Youtubes current content from and on the man. With this in mind it did not disappoint and had several amusing hours from one of Scien...Speculative Fictions greatest raconteurs and just to top it off a fantastic rendition of his original script and excerts of two drafts.

Very interesting indeed to see the life of a script through the Star Trek process.

A few years ago I had seen less Star Trek, Understood it less and potentially appreciated it differently. Back then I would not have enjoyed the almost constant running down of the series. Almost least of all from Ellison himself. Even still I think it's a little unjust but I survived it and it was interesting to find out why these writer's ended up feeling the way they do. This is not by any means a celebration or appreciation of Star Trek and it is slightly too heavy handedly a celebrations and appreciation of Ellison. That means it's audience is a niche one.

The rants are too long but the performance of Ellisons original script is tremendous.

Not what I thought

I was hoping and expecting a Star Trek adventure. What it turns out to be is a long rant by the original screen play writer and a very long interpretation of the screen history and subsequent disaffection by the author and others about it. I'm returning it as I just want a good sci fi Trek adventure!

So bad I did not get to the main story

I got put off this book by the moaning complaints of the author that the producers of Star Trek and Rodenburry had messed with his book. His constant moaning put me off the book so much I never got to the main story.