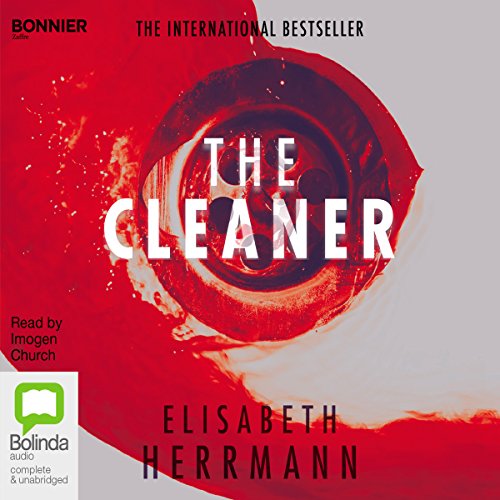 A gripping thriller with a dark secret at its heart.

Pools of blood, scenes of carnage, signs of agonising death - who deals with the aftermath of violence once the bodies have been taken away? Judith Kepler has seen it all. She is a crime-scene specialist. She turns crime scenes back into habitable spaces. She is a cleaner. It is at the home of a woman who has been brutally murdered that she is suddenly confronted with her own past. The murder victim knew Judith's secret: as a child Judith was sent to an orphanage under mysterious circumstances - parentage unknown. And the East German secret police were always there, in the background...When Judith begins to ask questions, she becomes the target of some powerful enemies. Nothing will ever be the same again.

10 Hours In - Could Not Finish

You read that right. I listened to 10 hours of this novel and finally gave up with just two more hours to go. Can a book be considered to be “over-written”? If so, that’s how I would describe this novel. Being equal parts tedious and overworked, I kept finding myself taking breaks. The last break lasted a few weeks and I realized it was time to throw in the towel.

First of all, this novel would have been significantly more relevant if published 20 years ago when the fall of the Berlin Wall and the end of the Cold War was only a decade out. Since this author is no Clancy and the historical context is no longer part of the West’s psyche, the story itself seems dated.

This book has too many layers and too many over-the-top coincidences to be believable. The “love story” is entirely absurd.

Last but not least, this book needed a heavy-handed editor to provide the novelist some tough love. There were too many superfluous storylines that dragged this novel further into the literary mud.

I fell in love with the main character’s gritty toughness. Judith is fascinating and the premise of the story is enthralling. Following Judith through her search for the truth is emotional and riveting. Because it is set in Germany it can be a little confusing to follow. It has a complex narrative so I had to re-listen to parts. I also had to research some of the history to understand some basics. Don’t let that scare you away though. It’s absolutely worth it. I’ve ordered it in paperback and plan to reread it. It’s that good. As alway, Imogen Church soothes and lulls you away from reality. Listening to her voice is escapism for me.

Imogen Church has a truly perfect voice when she's simply reading, which I wish she would do. Unfortunately, she is almost always overly dramatic - using strange emphasis almost every other word! She has a terrific knack for accents - her American accent was pretty perfect - but her male characters are cartoonish doofuses, which I don't think is the intention of the author. I was really disappointed by her performance, and I think it threw off my ability to listen fairly to the actual content of the story.

Not what I expected.

Took a while to get going, but an interesting book in the end. Not my usual read, but I would be interested in reading other titles by this author.

Captivating and intriguing at every turn

Wow, what a fascinating story. I was soo captivated and engrossed with this story I would double back on chapters just to make sure I was hearing the storyline correctly. A captivating story that left you on the edge of your seat. A story about an innocent girl with a troubled past, who finds out her life is not as she knows it to be, and the journey she embarks to find out who, how, why & where it all went wrong..... I loved this story and could easily listen to it again!!

Found it difficult to stop listening. Sad and uplifting at the same time. Best read this year!

Speaks to an era and political standpoint I am not interested in. The preci did not reflect the complexities

I did not realise that the book was Cold War oriented and did not enjoy the complex political agenda. Hi

Excellent narration. I enjoyed the story through & through. Well written with a few surprises along the way.

Brilliantly done all round, from narrator to the no holds barred content it's incredible. Highly recommend this book.

Way to slow to get going, but once it got started it picked up the pace it got intetesting. If you like German stories and there cruelty then this is for you.