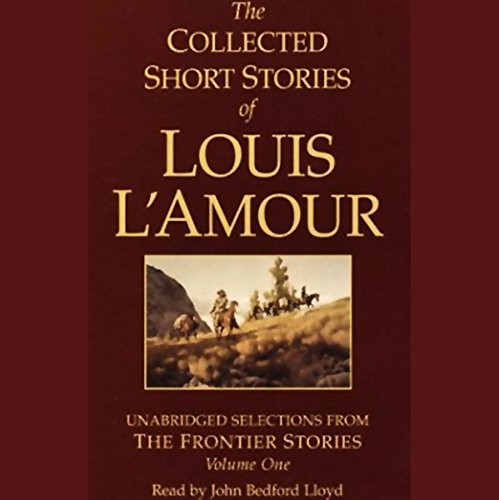 No one more vividly captures the rugged majesty and enduring spirit of the American West than Louis L'Amour. Collected for the very first time are seven unabridged frontier tales from a legendary master of the genre. Volume One celebrates this remarkable voice in American fiction with a captivating blend of some of his best-loved work.

Listeners are brought face-to-face with heroism in a most unexpected place in "The Gift of Cochise," as a single mother faces down an Apache war party. "Desperate Men" follows four escaped convicts running a gauntlet of double and triple crosses in a hunt for gold that will leave only one of them alive. In "The Skull and the Arrow," a beaten man finds the strength to confront his enemies in the discovery of a simple arrowhead. In "Marshal of Canyon Gap," a new face in town means nothing but trouble to marshal McLane, not only for Canyon Gap, but for the secret he's kept for too many years. In "The Defense of the Sentinel," a whiskey-soaked drunk wakes to find he's the only hope for a town surrounded by marauders. "Let the Cards Decide" is the story of a woman whose future hangs on the outcome of a card game, and the adventures continue with "Home Is the Hunter," the tale of a hardened gunfighter and the little girl who changes his rough way of life.

Brimming with history, unforgettable characters, and the pride of place that his listeners have come to expect, the first volume of The Collected Short Stories of Louis L'Amour is a lasting tribute to one of the greatest short story writers of all time.

What listeners say about The Collected Short Stories of Louis L'Amour (Unabridged Selections from The Frontier Stories, Volume One)

loved each story! able to picture in great detail with each story in the book.

All the stories were good. The one I couldn't understand was "The cave" . Best one was "Sherriff of Canyon Gap". The characters were pretty well fleshed out. Some light moments, Overall, some really good listening.

I enjoyed the stories. I also have the book. I was disappointed to find so few of the stories from the book. It's still an enjoyable series of short stories to listen to.

A wonderful collection of wonderful short stories that exemplify the great writing quality of Louis L'amour.

My disappointment and the reason for only 3 Stars for story, is not that they were uninteresting but because they were incomplete. Needing to write your own endings to the majority of the stories they can end any way you want them to, but if your like me, you'd rather let the author write the endings.

I normally enjoy Louis L'Amour stories, but poor judgement in cramming too many stories into 3+ hours spoiled it for me. I would have preferred fewer complete stories. I'm sure the original stories had satisfactory endings.

What made the experience of listening to The Collected Short Stories of Louis L'Amour (Unabridged Selections from The Frontier Stories, Volume One) the most enjoyable?

A nice collection of short stories.

Always kept you wondering how they were going to end.

What would have made The Collected Short Stories of Louis L'Amour (Unabridged Selections from The Frontier Stories, Volume One) better?

Giving the whole story, not just a part of it.

What character would you cut from The Collected Short Stories of Louis L'Amour (Unabridged Selections from The Frontier Stories, Volume One)?

None - just give the full story

Great story. Great readers. But it is 3+ hours on one file with no divisions for the MP3 player to work with. I don't understand why they did this.