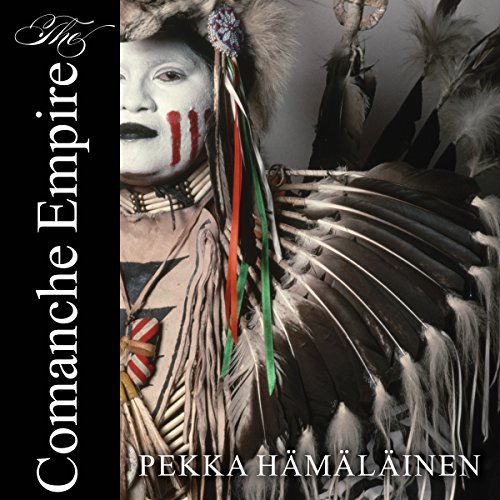 In the 18th and early 19th centuries, a Native American empire rose to dominate the fiercely contested lands of the American Southwest, the southern Great Plains, and northern Mexico. This powerful empire, built by the Comanche Indians, eclipsed its various European rivals in military prowess, political prestige, economic power, commercial reach, and cultural influence. Yet, until now, the Comanche empire has gone unrecognized in American history.

This compelling and original book uncovers the lost story of the Comanches. It is a story that challenges the idea of indigenous peoples as victims of European expansion and offers a new model for the history of colonial expansion, colonial frontiers, and Native-European relations in North America and elsewhere. Pekka Hämäläinen shows in vivid detail how the Comanches built their unique empire and resisted European colonization, and why they fell to defeat in 1875. With extensive knowledge and deep insight, the author brings into clear relief the Comanches' remarkable impact on the trajectory of history.

I have to chuckle at the review of this book that read “The most boring book ever.” I am certain that for many this would be true. However I thoroughly enjoyed it. For sure it is a comprehensive study and evaluation of the Comanche nation dealing with the forces of nature, society and economy that drove the development, existence and failure of Comanche life. I learned so much more about Native American culture that other wonderful books don’t have time to delve into. I cannot give it five stars overall as it was difficult to hang with and needed to take it in stages. I have to wonder if it has been used as a textbook.

it's like a technical manual for the Comanche Empire. its definitely not a light listen..

This is a greatly detailed documentary.

The information comes fast and furious. It's hard to keep up at times. The latter part of the Comanche history as presented dove tails somewhat with all the fictional Westerns of yester year.

That's where my real enjoyment started.

Should you be looking for a more visceral, laid bare reporting of the history of young America, then I haughtily recommend this book.

Can I make money off my thesis?

This was a struggle. If is was 50 to 60 percent shorter it would have been worthwhile. This was like somebody reading their thesis.

Would you be willing to try another book from Pekka Hamalainen? Why or why not?

Probably not. This read like a thesis, saying the same thing over and over in a slightly different way. I found my mind wandering frequently. I kept thinking about stopping but overall it is a topic I am interested in. It was a painful listen.

Did Carla Mercer-Meyer do a good job differentiating all the characters? How?

The pronunciation of many words was confusing since they were not being pronounced the way I am used to hearing them. Once I figured out what she was trying to say I understood, but why?

Could you see The Comanche Empire being made into a movie or a TV series? Who should the stars be?

If I think of The Comanche Empire being made into a move, all I think of is Heaven's Gate.

simply brilliant. This will change your perspective on many subjects. it is well worth the read

Wow, the worst book ever

I am an avid reader and an avid audio book listener, nearly 700 audio books and I have never listened to a worse book. Both the book itself which is tedious and laboriously written and one of the most terrible narrators I have ever cringed through.

The book is like a doctoral thesis in which the author quotes a source, states a date and then goes on to another source and quotes a date... I kept waiting for it to get better, but it NEVER did. I do sympathize with the narrator a bit, as reading something like this would be mind numbing, but she flawlessly pronounces Spanish and French names while mispronouncing the english words, and her diction is awful.

I was hoping for a book about the Comanche culture, their history, their struggles, their triumphs... but what I got was the authors socio-political ramblings hour after hour. I don't know who the people are who rated this book highly, I can't imagine. This is not only not entertainment, it isn't interesting in the least... I tried. There are much better books about the Comanche "Empire of the Summer Moon: Quanah Parker and the Rise and Fall of the Comanches, the Most Powerful Indian Tribe in American History" is superb. Spend your credits on that book, not this one.

I have over 100 titles in my Audible library and have thoroughly enjoyed almost every one. This is a startling exception to that rule. I prefer history, and I loved Empire of the Summer Moon. That book is filled with vivid details about the American West and Comanche life. This book has almost no detail about Comanche daily life. It's the author's daydreaming about political interplay between Comanche, French, Spanish, Mexican and Anglo-American societies. In his conclusion, the author states that his "task in this book is to recover Comanches as full-fledged humans." What? Although the fact of Comanche humanity is obvious, the author still fails miserably at his stated task. He claims that earlier works glorify Europeans while demonizing Native Americans. His solution: do the opposite. Predictable and pathetic. The Comanche potential for deceit, violence, racism, brutality, and greed, which he purposely varnishes, combined with that for intelligence, adaptation, compassion, charisma, which he glorifies, are what actually characterize them as "full-fledged humans."

Use 1/3 of the adjectives

If you could sum up The Comanche Empire in three words, what would they be?

jumps all over the place

I am not impressed with how many words she knows. I am dissatisfied with how much of my time she wasted telling a great history of the south west.

Terrific insight on an overlooked indigenous empire and culture, how it came to be, why it thrived, and the causes if its collapse.

This is a crucial addition to indigenous studies; I highly recommend it! Redefines empire and colonial relations in North America.

The narration is heavy at times. This questionable fluidity can lead to minor misunderstandings of certain phrases, blurring their meaning.

Well worth reading. Wonderfully informative! It is a shame that it is hobbled by a reading performance that is only a little better than a robotic GPS voice.

this book could be half the size

read by a robot. difficult to stay awake. the amount of repeating and unnecessary adjectives made me zone out..