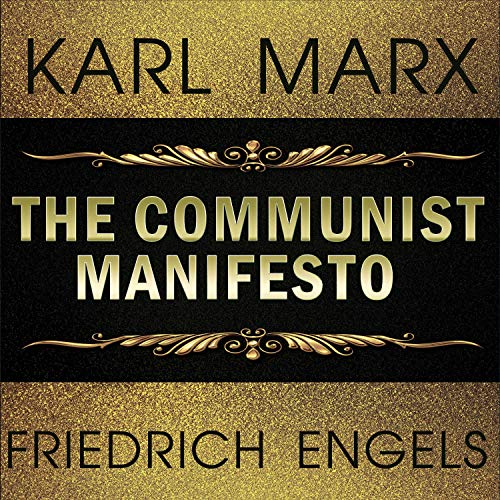 "Manifesto of the Communist Party" by Karl Heinrich Marx and Friedrich Engels is a book where, for the first time, the aims, tasks and methods of fight of the emerging communist organisations and parties of the nineteenth century were declared and explained. It is the greatest philosophic and political treatise that is important in some way even nowadays. According to experts, Manifesto is a powerful work that still can be used as a good method to mobilize people. In addition, the work of Marx and Engels will not leave anyone indifferent. Historians noted that this book had been ahead of time. Manifesto definitely opened the eyes and minds of workers and socialists all over the world.

What listeners say about The Communist Manifesto

This audiobook is missing the last chapter, “Position of the Communists in Relation to the Various Existing Opposition Parties”.

I am a commie bastard...

When it comes to my immediate family.

Expand that reach to include my close friends and I become a hardcore Socialist.
I want all my friends and family to do well, eat well, and live extraordinary fucking life.

Now include people outside of my community... and I become a democratic bastard somewhat.

My political views are based on scale. If I don't know you, I don't fuck with you, but I want to get to know you, so we can fuck with each other in a positive environment pushing our communities to grow and expand in terms of livelihood, love, health, and wealth.

But, at scale, communism is fucking terrible. It doesn't work. We have hundreds of years of data of this ideology being completely failed. Either way, it's still interesting to listen to the thought process behind it.

I love you, and I hope the person reading this becomes the one to set us free from the Matrix.
Pull me out, and pull out. We don't need more people, we need more lovers of independent creative thinking. -the6paths.com

Good overview of the philosophy and nothing more.

To understand the basics/fundamentals of Marxism it provides a good overview and the performance was very clear.

However the ideas of the ideology are at best, baseless assertions and counterfactual drivel that for reasons beyond my understanding people (especially academics) take seriously.

It should be read for two reasons: 1. An.understanding of marxism as to fight it, 2. As a drinking game for when Marx says something stupid, counterfactual or just plane wrong.

Along with The Theory of Evolution by Natural Selection, Principia Mathematica and General Relativity this is one of the most important works ever written. Only socialism can save the planet and mankind from the destructive forces of greed and capitalism.

was this written by a child?

I know that the communist manifesto is well over 150 years old, but even then you cant just write off criticism because 'theyre just stupid', 'theyre just acting in the interest of the bourgeoisie'. While I understand where this is coming from and Im aware of the hard and terrible life Marx has lead, the whole work seems to be the rattling of a bitter man who blames all societies shortcomings on the bourgeoisie and states, without evidence, that all problems magically go away when the workers seize power. Mindbogling that well over a 100 million people died because of these childish ramblings. Good narrating though.