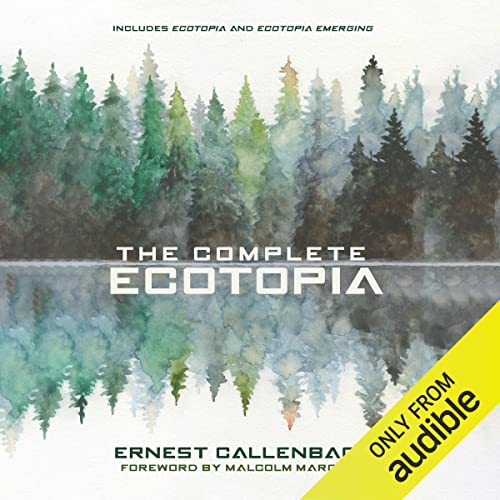 “One of the most important utopian novels of the twentieth century that still has very important lessons to teach us. It will always convey to perfection the wild optimism of that moment: a feeling we need to recapture, adjusted for our time.” (Kim Stanley Robinson on Ecotopia)

Collected in one handsome volume for the first time, The Complete Ecotopia presents an early classic of environmental science fiction in its entirety. Ecotopia (1975) and Ecotopia Emerging (1981), which paint detailed portraits of a healthier earth and a happier society, became foundational texts for a new wave of environmental activists, and they still contain an abundance of ideas yet to be realized. Ernest Callenbach’s Ecotopian saga anticipated climate fiction by more than a decade, sold approximately one million copies, and was translated into one dozen languages, and it predicted a host of innovations running from C-SPAN to widespread recycling. This edition includes two retrospective essays by the author, as well as an updated foreword by Heyday founder Malcolm Margolin. An important document of utopian ideas from the '60s and '70s, The Complete Ecotopia is also a stimulating listen for environmentalists today - one that tells a bold, inventive, and adventurous story.

What listeners say about The Complete Ecotopia

The vision shared in this novel is a beautiful one. A story of a world that we may have the option still to move towards. It is a vision of hope that I hold dearly.

The narrator has a great voice and cadence, but misread so many words. Basic things that indicate he has never been to the west coast or fixed things in his life (no offense, it just throws the reader off). Some mispronounced words: Placerville, lead (as in an electrical lead), assay... Will update as I remember and come across more. Hopefully this can be edited!

Thanks for the upload of this classic!