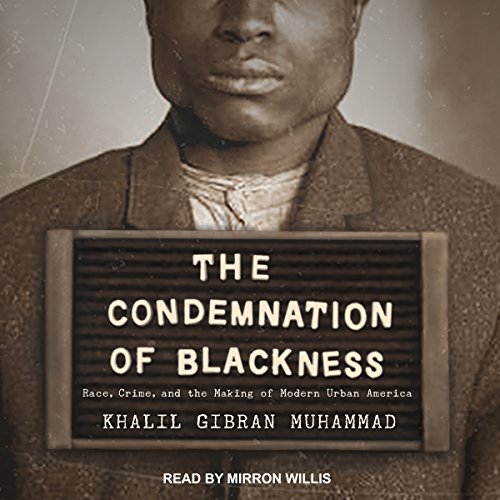 The Condemnation of Blackness

Lynch mobs, chain gangs, and popular views of black Southern criminals that defined the Jim Crow South are well known. We know less about the role of the urban North in shaping views of race and crime in American society.

Following the 1890 census - the first to measure the generation of African Americans born after slavery - crime statistics, new migration and immigration trends, and symbolic references to America as the promised land of opportunity were woven into a cautionary tale about the exceptional threat black people posed to modern urban society. Excessive arrest rates and overrepresentation in Northern prisons were seen by many whites - liberals and conservatives, Northerners and Southerners - as indisputable proof of blacks' inferiority. In the heyday of "separate but equal", what else but pathology could explain black failure in the "land of opportunity"? The idea of black criminality was crucial to the making of modern urban America, as were African Americans' own ideas about race and crime.

Chronicling the emergence of deeply embedded notions of black people as a dangerous race of criminals by explicit contrast to working-class whites and European immigrants, this fascinating book reveals the influence such ideas have had on urban development and social policies.

"This important book is a vital contribution to our understanding of the role of racism in American society." (Aldon D. Morris, author of The Origins of the Civil Rights Movement)

What listeners say about The Condemnation of Blackness

For a very select audience

This book isn’t exactly what i was expecting. It’s not really designed for a broad audience. The book provides an incredibly detailed (perhaps excruciating) history of how black crime statistics in the US were interpreted. It starts with the 1890 census and slowly works forward about 50 years (although the main focus is on 1890-1920). The book sticks very carefully to reviewing the history of thought in sociology and criminology. If you are writing a PhD thesis in either of these topics, the book will be interesting to you. But I would not recommend to a broader audience. The simple point - high rates of black incarceration reflect racist society, NOT that black people are inherently or culturally more prone to commit crime does not need all this detail. There is also a very large chunk of the book that focuses on the different help given to black southern immigrants vs European immigrants in Philadelphia. It’s a great case study, but it’s extremely dry and really goes into more details than most people could possibly want. The author rarely speaks actively and only occasionally draws together the lessons from his work. It is instead a carful retelling of an impressive set of primary sources. I don’t disagree with the books analysis but it just didn’t feel like I was reading a book for a broad non-academic audience.

The narrator is clear but didn’t help bring the book to life. A fairly dry monotone added to my frustration. Given the dispassionate language with which the book is written, it’s not obvious he had much opportunity to do more.

So in conclusion, it’s an impressive piece of work on an important topic. Just ask yourself if this is the kind of book you are after.

This is a great book .

It was very informative and I really enjoyed it. It is definitely a worthwhile read

Everyone needs to read this book, in fact, this book should be a required text and taught in schools.

This was a great study from Gibran Muhammad. I loved the amount of information and study done here. This is a book that should be taught in schools, and vital for understanding the lives of blacks in America.

Very informative and detailed historical account of the racist sentiments of the dominant white American society from Emancipation through The Reconstruction period. This book makes a clear correlation between media publications take on race relations then and now with published writtings and incidents involving excessive force from the police, as well as organizations within the black community working to correct some of the public perception of what was deemed by opponents of black progress as 'Black Crime'.

This book and even the narration was an example of flawless execution on a very difficult topic. The only thing the author could have improved upon would have been him relating how it all tied in today a bit more but that probably would have made the book too long. All in all I learned quite a bit from it.

excellent and important content; critical information. I will be revisiting this text many times.

While this book is packed with information and shows how racism and prejudice is built into the system, it was incredibly hard for me to pay attention too. It felt like a long presentation that struggled to bring me in and hold my attention with something that I am, in fact, interested in. I was disappointed.

A foundational work in understanding how racism became written into our culture through “science.” Kahlil Muhammad writes dispassionately yet absolutely convincingly of how, from the mid-19th century through the mid-20th, largely through the “discipline” of sociology, blackness was made nearly synonymous with criminality, in a new and more sophisticated form of demonization through the so-called scientific interpretation of statistics, urban demographics, and in contrast to the whiteness of European immigrants.
Well-read, this work adds to the essential body of scholarship on how racism is maintained, expanded, and comes to pervade every single aspect of American society. Read it and rage against the lies promulgated in the name of “improvers” that we live with still in the 21st century.

1 of the Best Books I've Read

A MOST important profile about the history and making of black criminality was captured here.