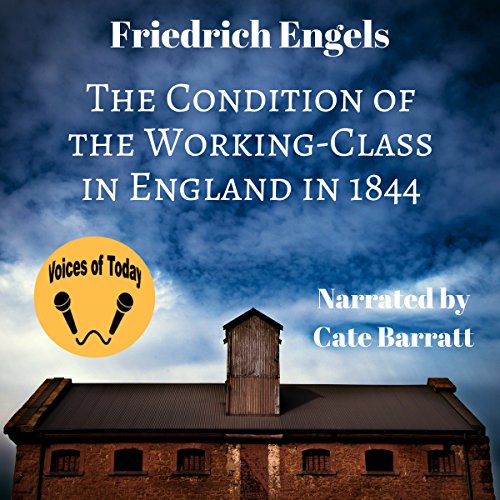 The Condition of the Working Class in England in 1844

Friedrich Engels spent two years (from 1842 to 1844) in Manchester, England, working at his father's factory. During that period he observed and recorded the effect of the industrial revolution on the labor market and the subsequent condition of what became the working class of England. While it is widely argued that the industrial revolution improved the standard of living for the general population, Engels' observations, corroborated by his considerable research into official reports by various government-appointed commissions, reveal that in 1845, the working class was still paying a heavy toll for England's industrial rise.

READ BY A MACHINE?

Would you try another book written by Friedrich Engels or narrated by Cate Barratt?

APPALLING. SOUNDS AS IF IT'S BEING READ BY A ROBOT.

Would you be willing to try another one of Cate Barratt’s performances?

ALWAYS TRY A READING BEFORE YOU BUY!

The book is amazing. It might be a bit exhaustive for some tastes, with it's endless lists of injustices against workers, but it's scope, intelligence, with and fury make up for it.

Unfortunately the narration, while bearable because the book is good, is pretty damn awful. Literally sounds like the word processor text reading robot.