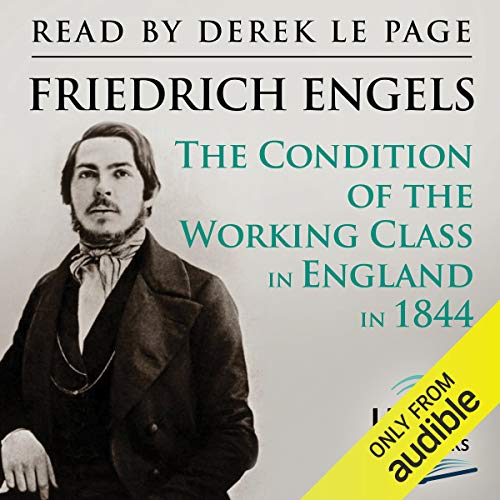 This remarkable account has had an enduring influence on social and economic studies and has remained in print since its first English publication in 1885. It was written, in German, by a youthful Friedrich Engels, the son of a German industrialist, who was already concerned - even angered - by the conditions he saw inflicted on the working classes as the Industrial Revolution gathered momentum.

His first visit to England (1842-44) and what he saw there with his own eyes fuelled his concerns and prompted him to make this formal study. It is a remarkably mature document for a 24-year-old. Engels set out to show that the working classes in factories were far worse off in terms of general health, life expectancy, working hours and working conditions than they had been in the agricultural environment that existed in previous centuries. The 18th-century inventions such as the spinning jenny and the spinning throstle led to the growth and proliferation of factories, and the increasing use of steam and the growing demand for coal resulted in the ‘proletarians’ being subjected to more and more brutal working environments.

In business terms, it was a huge success - the demand for and the profits made in the trading of wool, cotton, linen, and the harder products of iron essential to the construction of railroads, bridges and steam ships, grew exponentially. In human terms it was a nightmare. ‘The frequent stooping and the bending to the low machines common to these branches of work have, in general, a stunting effect upon the growth of the operative. In the throstle-room of the cotton mill at Manchester, in which I was employed, I do not remember to have seen one single tall, well-built girl; they were all short, dumpy, and badly-formed, decidedly ugly in the whole development of the figure. But apart from all these diseases and malformations, the limbs of the operatives suffer in still another way. The work between the machinery gives rise to multitudes of accidents of more or less serious nature, which have for the operative the secondary effect of unfitting him for his work more or less completely. The most common accident is the squeezing off of a single joint of a finger, somewhat less common the loss of the whole finger, half or a whole hand, an arm, etc., in the machinery. Lockjaw very often follows, even upon the lesser among these injuries, and brings death with it.’

‘Manufacturing cities’ such as Liverpool, Manchester, Preston, Bolton, Rochdale and others expanded at a rapid pace, but living and working conditions were given low priority. The poverty of the working man resulted in the slums filled with garbage and rotten dwellings in which large families lived in one room. As a result, higher mortality from disease and crime was inevitable. At a meeting in Paris in 1844, Engels showed his report to Karl Marx. It had a strong effect on Marx’s future writings on economics, politics and the working classes, and the meeting engendered the close collaboration between the two which was to have such a dramatic effect on world history.

In 1892, Engels wrote a new preface to his report, outlining the developments over the intervening half century, giving a fascinating perspective. It is with this preface that this recording starts.

A great way to read along

I needed to read the book for a course and it definitely helped. I listened and read along. 👌