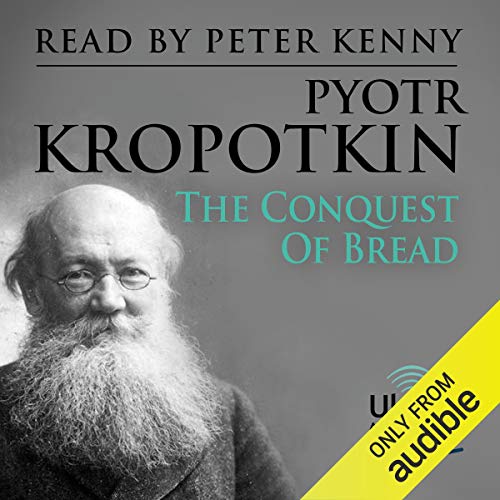 The Conquest of Bread

Pyotr Alexeyevich Kropotkin (1842-1921) was the leading - and the most widely admired - anarchist Communist in the last decades of the 19th century and the first decades of the 20th. He lived long enough to see the establishment of Communism in Russia under Lenin, who acknowledged Kropotkin’s commitment to political change. However, Kropotkin was a very different kind of revolutionary figure, for he argued not only for Communism but anarchist Communism, distrusting and even despising central government control in favour of a more individual sense of responsibility and civic duty.

In The Conquest of Bread, first published in 1892, Kropotkin set out his ideas on how his heightened idealism could work. It was all the more extraordinary because he was born into an aristocratic land-owning family - with some 1,200 male serfs - though from his student years his liberal views and his fixation on the need for social change saw him take a revolutionary path. This led rapidly to decades of exile. Even today, The Conquest of Bread is fascinating listening.

It is a passionate, even a fierce polemic for dramatic social change. Kropotkin looks at the European revolutions, from the French Revolution to the upheavals of 1848 and later 19th-century events, commenting on why they were ultimately unsuccessful. Like Karl Marx he was convinced that major social upheaval was inevitable, but he argued for a different social structure - one where innate human goodness would not only overcome individualist capitalist greed but obviate the necessity of overbearing government control. Kropotkin’s faith in humanity and the reasonableness of man may seem naive, but his slogans are persuasive. ‘All belongs to all’; 'well-being for all’; ‘anarchist Communism, Communism without government - the Communism of the free: it is the synthesis of the two ideals pursued by humanity throughout the ages - economic and political liberty.’

His views encompassed further ideals: wealth should not hoarded by the few but distributed to each according to his need; women must be released from traditional domestic drudgery (he predicted that new machines would lightening the domestic load); the working day could easily be reduced to five hours a day, allowing more leisure time. With these innovations, Kropotkin argues, the future would be very different.

The Conquest of Bread is a classic political text of an idealistic vision that may never come to pass but which contains views which are difficult - theoretically - to dismiss.

What listeners say about The Conquest of Bread

Kropotkin made some excellent criticisms of Marx and has made me think more critically about the views that I hold. I have been an undefined Marxist until now, but I will have to reconsider this in light of reading The Conquest of Bread.

The book itself might as well have been written by a fifteen year old coming up with a way to implement socialism.

A book of amazing analysis & prediction of Capitalist & authoritative systems that strip the masses of any form of empowerment. Runs with the assertion using scientific experience that humanity is above all else, Good and full of a love for creation. Even translated to English, Kropotkin has a lovely handle of prose and a powerful moving way with words. I tend to be biased against British narrators since they have a tendency to be extremely dry & lifeless but this narrator had a unique voice and great ability to read that kept me hooked to every word. Essential reading for anybody who wants to make the world a better place.

Control to the workers!

Well-written, well-narrated. this book really made me think about inequality in our society today, and in particular about how I can't believe Jeff Bezos made so much money while Amazon workers contracted COVID-19 due to unsafe workplace policies with minimal hazard pay and were fired (and in some cases smeared and ruined) for organizing for dignified working conditions.

There is allot of good information here but it is so out of date it hard to read.

It's not so surprising how little has changed in a century. Definitely a book I will reread.

The Conquest of Bread is a seminal work of anarchist literature that plainly lays out arguments for a stateless society founded on the principles of mutual aid and communism. Kropotkin addresses failures of other communist systems to liberate fully the workers from the structures of capital.

voice actor is great, the story is okay.

I wish he would address the corruption potential, giving power is corrupting. For example, the person or group that has all the food now has the means to force their will on others. congrats you now have a goverment that had no problem taking power and this happens everytime communism is tired.

an amazing book a d narrator

Little dated, but much of it holds up despite its age. A good place to start to understand anarcho communism.

This book is a mixed bag. On the one hand, many of its prophecies feel outdated. On the other hand, some of them feel incredibly prescient.

The central message that the right to wellbeing ("bread") should be guaranteed to all people irrespective of their labour contribution jives well with contemporary debates around Universal Basic Income. Whether or not anarcho-communism is the best form of implementing UBI is up for debate. I agree that anarchism of SOME kind needs to be involved, but, contrary to what Kropotkin would say, I think that a healthy dose of voluntary market transactions need to be included.

Kropotkin, like Marx, wrote on the cusp of the marginal revolution in economics whose insights he failed to appreciate. Like Marx, his economic theory is still unfortunately stuck on 19th century utopian economlc theory. This shows e.g. in Kropotkin's fetishistic celebration of local production over global trade, his opposition to voluntary wage labour and voluntary private property, his criticism of "luxury" good production over the production of "necessities," his failure to appreciate the deep incentive problems of (voluntaristic) communism, etc.

Unlike Marx, however, he correctly foresaw the dangers of collectivism and centralized state socialism. He brilliantly extols the virtues of self-organization from the bottom-up as the only viable means of achieving the collective ownership and distribution of social wealth and the means of production. He is thereby an important theorist of libertarian socialism.

At the same time, his call for the spontaneous bottom-up expropriation of bourgeois property in a sudden orgy of proletarian revolution is naive in its faith in the common man and the distributive wisdom of the masses. His most ardent speeches are full of economic, psychological, and sociological blind spots based on an ignorance of the best science of his day. I'm afraid they invalidate many of his most optimistic proclamations about utopian communism. In particular, there are many red flags (pun intended) in his treatment of the problem of organizing work and production in the absence of private property and its system of incentives (of reward and punishment). He simply cannot offer solid empirical or theoretical reasons for his speculative predictions.

The supposed anarcho-communist paradise of everflowing milk and honey is an elusive goal that suffers from numerous self-contradictions and avoidable scientific errors. How can a voluntary order be built upon a forceful expropriation of private property? How can self-interest be expelled without the policeman, the torture chamber, and the Gulag? But the core insights are still relevant today, e.g. on the dangers of statism, the need to deliver the bounty of surplus production to all, the unforeseeable possibilities of human liberation in the age of cooperative plenty, etc.

In the future, I believe the only rational choice social organization faces is between anarcho-communism and anarcho-capitalism. Statism has failed. It is time for the left and the right to move on to greener pastures, i.e. the Elysian fields of libertarian self-organization.

A tremendous book, perfectly read. In times like these, works such as this can offer valuable new perspectives.

As a foundational text of anarchism, this is worth a listen. But I’d recommend hitting skip a few times when our boy Pyotr starts talking about tonnages of vegetables, because BOY does he go on once he’s on that topic.

while the book is outdated, its an intriguing look into the historic perspective of socialism and society of the time

Inspirational words brought to life by a narrator able to convey the enthusiasm with which they were written. Loved it.

Really great book with such an optimistic view of the future, although it's somewhat dated now, it's still enlightening. Absolutely fantastic performance by Kenny, he really brought the book to life.

This book is a wonderful option for an introduction into socialist Theory, and the only real criticism is that it can get repetitive at some points if you've already accepted the underlying principles, but that is to be expected.