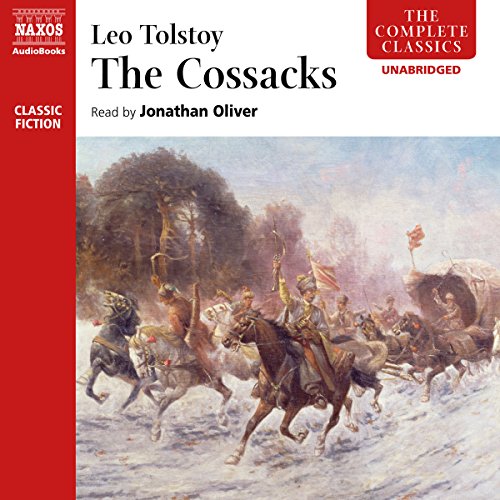 Dissolute, disenchanted Dmitri Olénin decides to join the army as a cadet and is despatched to the Caucasus. There, he is transformed by seeing how the indigenous people live in harmony with nature, how their lives have more meaning than those of the superficial social elite in Moscow, and he finds a new sense of self and purpose. But nothing is ever quite that simple.

Love and loyalty are tested to the very limits in this semi-autobiographical novella, which is one of Tolstoy’s best-loved works.

Tolstoy's novella tells how a young, aristocratic Russian, doing military service among the Cossacks in the Caucasus, learns about life, love, and himself, upsetting his previous notions. Jonathan Oliver performs, rather than reads, varying the voices adeptly from person to person and among men and women, matching speech to how it's described, providing the proper expression and emotions. His voice is strong; he's best at Cossack men, especially the rambunctious Daddy Eroshka. The use of strong British accents to represent Russian accents, while reasonable for a British production, may strike American listeners as odd - but it's the best way to go, and the distraction passes. This is an able narration of a fine, subtle work.

This was more like Chekhov than anything else I've read by Tolstoy. "The Cossacks" is long on atmosphere and character, very short on plot. Dmitri Olenin forsakes Moscow society to help fight the Chechens(!) at the foot of the Caucasus mountains. The Russians and Cossacks are on one side of the Terek River, the Chechens on the other. There are skirmishes, an occasional hunting expedition (for game and humans), and one brief and violent shootout near the end. Olenin falls in love, is rejected, gains some insight, and leaves.

It's definitely not War and Peace in miniature.

But it IS a story of great warmth and beauty, and the characters are finely drawn, with Tolstoy's apparently effortless ability to penetrate their souls with a few deft phrases. Some of the descriptions of nature are breathtaking.

(Wikipedia says Tolstoy reworked the novel drastically after re-reading "The Iliad." If so, it could only have been to make something as unlike "The Iliad" as possible.)

I found Jonathan Oliver a bit strident for my taste. He's great with the dialogue: each character is clearly differentiated and the emotional tone is just right; but the narrative passages, whether public or private, tend to be voiced in the same declamatory style. (Better declamatory and audible than whispered and hard to hear, I guess; but there must be a happy medium somewhere.)

The only thing that really bothered me about this particular Audiobook is the accents of the Cossacks which were Irish. Now I know anyone would know those weren't there real accents but I felt like I was listening to a James Joyce novel instead Leo Tolstoy. I guess an Irish accent represents the "lower class" in Russian life.

A delightful and short read from a master.

This story would make a great introduction for anyone interested in Tolstoy but who does not want to jump into Tolstoy's longer works. I enjoyed the story quite a bit. But, the historical information regarding life in the Caucaus mountains is worth the price of admission all by itself.