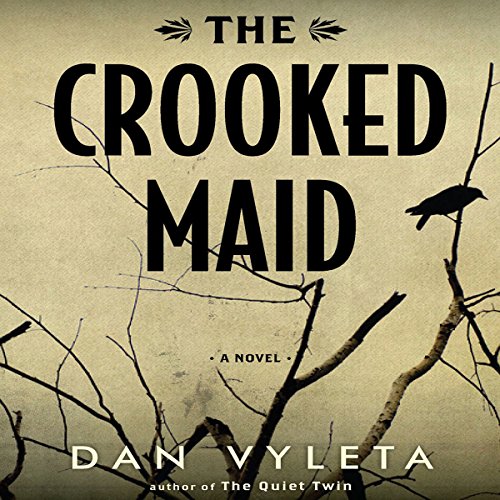 Vienna, 1948: The war is over, and as the initial phase of denazification winds down, the citizens of Vienna struggle to rebuild their lives amid the rubble.

Anna Beer returns to the city she fled nine years earlier upon discovering her husband’s infidelity. She has come back to find him and, perhaps, to forgive him. Traveling on the same train from Switzerland is 18-year-old Robert Seidel, a schoolboy summoned home to his stepfather’s sickbed and the secrets of his family’s past. As Anna and Robert navigate a damaged, unrecognizable city, they cross paths with a war-widowed American journalist, a hunchbacked young girl, and a former POW whose primary purpose is to survive, by any means. Meanwhile, in the shells of burned-out houses and beneath the bombed-out ruins, a ghost of a man, his head wrapped in a red scarf, battles demons from his past and hides from a future deeply uncertain for all.

In The Crooked Maid, Dan Vyleta returns to the shadows of a war-darkened Vienna, in a thrilling and atmospheric story of blame, guilt, and restitution.

I managed 12.31 minutes of this before having to return it. It's like having a novel read to you by your satnav.

The narrator has superbly crisp diction and pronunciation and absolutely no shades of emotion or timing or apparent understanding of what she's reading. The horrors of the battle for Stalingrad are read in the same monotonous rhythm and in the same icy tone as the description of a conversation on a train. She stresses the wrong words, ends flat statements on an upward note and just ploughs on through like a machine. How on earth did she get the gig?

Now I'm going to have to go back to Audible and plead, yet again, to return another book because of dire narration. The book is supposed to be excellent, by the way. The author should sue!