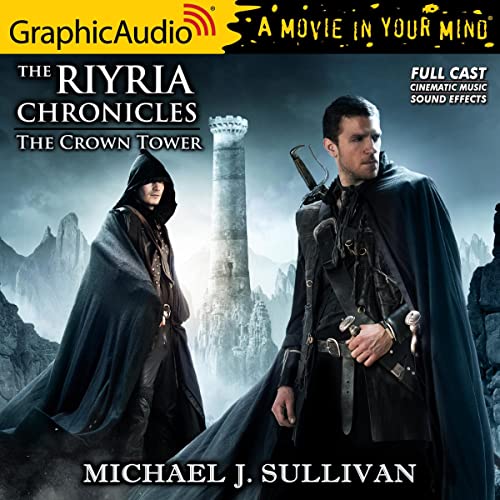 TWO MEN WHO HATE EACH OTHER. ONE IMPOSSIBLE MISSION. A LEGEND IN THE MAKING.

A warrior with nothing to fight for is paired with a thieving assassin with nothing to lose. Together they must steal a treasure that no one can reach. The Crown Tower is the impregnable remains of the grandest fortress ever built and home to the realm’s most valuable possessions. But it isn’t gold or jewels the old wizard is after, and this prize can only be obtained by the combined talents of two remarkable men. Now if Arcadius can just keep Hadrian and Royce from killing each other, they just might succeed.

What listeners say about The Crown Tower (Dramatized Adaptation)

I tried to listen to the older versions but really couldn't get into it. It's not the narrators fault, I have ADHD. Graphic Audio is the way to go, It's been such a fun experience. I tend to lose track of where I'm at a lot while working, The different voices helps with staying focused on what's going on. We take for granted how much work and planning goes into creating these worlds. Its full of surprises and I cant wait to follow the duo's journey. I am glad I started here. I've ordered the next Graphic Audio release,

I adored the performance of the actors. It made me buy the next one. The actors portraying Royce and Hadrian made me LOL more than once.

The female characters are prostitutes how original

Instead of rape as a plot device the a female prostitute gets murdered at work. I'm not even done chapter 1 yet. This is why I like reading stuff by women. I'm sick of male content creators dramatizing their rape fantasies. It's gross. That's not enjoyable reading for me. We are actual people. We are almost half the population of people who read books..

I'm glad to see more of Riyria's history and get to know the charecters better. This definitely doesn't disappoint and it's nice to get more interesting nuggets based on my knowledge of Revelations. If you enjoyed the previous books you'll also have fun with this one. My only regret is having to wait for the next book to come out on Graphic Audio. :'(

SO sad. This “dramatized” version is the ONLY version that includes very offensive extreme religious profanity.

The beginning of something special

This seems like the beginning of the adventure for Riyria, but there is already a dramatized series called Revelations with these characters?

Now the question is do I wait to see if the next entry in this Chronicles series is released soon on Audible - the end credits indicate there will be another, or do I jump back (or is that forward) to the Revelation books!?

If you are reading this review and haven't guessed I enjoyed this immensely. Sorry I am not much of a reviewer. I just know what I like and this...I like.