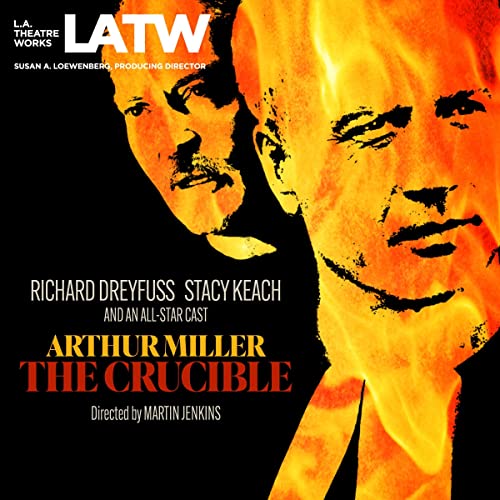 In the rigid theocracy of Salem, Massachusetts, rumors that women are practicing witchcraft galvanize the town. In a searing portrait of a community engulfed by panic—with ruthless prosecutors, and neighbors eager to testify against neighbor—The Crucible famously mirrors the anti-Communist hysteria that held the United States in its grip in the 1950’s. A Tony Award Winner for Best Play. A BBC and KCRW co-production.

What listeners say about The Crucible

I feel every actor did really good and to the point performance I would recommend it.

What made the experience of listening to The Crucible (Dramatized) the most enjoyable?

As an English teacher I enjoy listening to well performed plays...and so do my students. The actors perform admirably.

What was one of the most memorable moments of The Crucible (Dramatized)?

Stacy Keach is magnificent as John Proctor. "My Name man, my name."

I wish there was a notation that this is an abridged version of the play.

I bought the book to read along with the book and it does not follow the book. Extra lines are added and some are out of order. It is a good performance, but I wanted it to be the book.

Why is this labeled "unabridged"?

What disappointed you about The Crucible?

Depending on which audible/amazon screen you are on, this is labeled as "unabridged." However it is NOT! There are bits and pieces missing out of many lines from certain scenes. I was having my students read along to it on some days, but even with warning that it wasn't exact, it was so confusing to them that many would just stare into space while listening--which means that they miss scene directions, etc. Also, since I used my credits to "purchase" it, I apparently don't get a refund or option to "return"! Very disappointed that while it is a GREAT performance, they felt the need to slice up the lines and YET still call it unabridged!

What was one of the most memorable moments of The Crucible?

Amazon/audible needs to be more explicit and straight-forward when including information about abridged/unabridged versions!

This is a wonderfully done recording with good actors. However, This recording is not complete and does not follow the script to the T, but that draw back is overshadowed by the actors. They bring the play to life the way it is meant to be. This recording even though incomplete is superbe.

Not the Complete Play

This performance is abridged. The description says it's narrated by Stacy Keach, but I'm 20 minutes into the performance and all the narrative passages are missing, as well as some of the dialogue.

I got this recording so I could listen to actors perform while I read, since I find it difficult to experience a play by reading it. The only redeeming quality is that the performance is quite good and, of course, the story is excellent.

I guess I should have read some reviews before making this purchase. Disappointed I wasted a credit on it.

Do not use this as a teaching tool

I need audiobook versions of texts to align with IEPs and for universal access to education. This does not align whatsoever to the Penguin classic version of the text, or any other version I could find.

Good performance but not completely accurate

This recording was not accurate. May parts were altered or left out. It made it difficult for my students to follow along in the text.

Audio recording hard to listen to

The story is great, and the actors are great, BUT during the dramatization there are times when the actors are whispering or talking softly. Those times are really hard to understand what is being said. I ended up buying the book because I was frustrated with missing lines.

this is a very good dramatization! (you feel as though you are watching the play instead of listening to it) but it is very very fast and hard to follow along with the book at times because they skip portions.
also the story is very upseting to listen to, i felt on edge after i listened to this, but it's well written and gets the point accross.

This is really bad.

This is not true to the play and leaves a bunch of information out. The sound quality is bad and distracting. Very disappointing.

The actors gabbled so fast that I had trouble discerning one whispering voice from another, and don't listen to this as you fall asleep because you end up straining to find out what is being said in between screams and barking dogs! A real shame.

I found it sometimes hard to understand what was being said because of the bad sound quality and the whispering speech. Some of the sound effects such as a persistent dog barking are very annoying.

Not the best way to listen to a literary classic.

What made the experience of listening to The Crucible the most enjoyable?

A star-studded cast for a play that's become a classic in its own right. As an analysis of human nature and fanatism it remains thoroughly current.

why are these women putting on such breathy voices

A lot of shouting and breathy acting that is way overdone. But the story is a classic.

Very good dramatisation, highly enjoyable and very close to the original script.
The sound effects are sometimes in excess and more often than not it sounds like the characters are whispering.
Nevertheless a very helpful edition.

There was no reading of the Overture/Act 1, so difficult to follow. Too fast, even when slowed down.

This would have been much better if the studio has got rid of all extraneous noise… you could understand it, just about, but it wasn’t clear and not up to an enjoyable standard….

Easy to follow , good speaking voices- easy on the ear. I was concerned they would have that irritating American drawl, they didn’t.
Production is very true to the book/play. Thank you

Loved the book...another great story by Arthur Miller. Would definitely reccomend..
Onward to the next book:-)

The story was ok, but it would've been better if it was not adapted. It skipped a lot of lines.

SKIPS SO MANY PARTS

Skips lots of parts not really worth listening to, if you're just after a little but of info then this is fine but not very accurate to the books

Would not recommend to follow on with the book

If you're a student like me, I would not recommend this book as it skips over so many crucial parts, there is one on youtube that follow the book perfectly.

Great actors. I was completely transported. What a powerful story! The actors' performances really brought the story to life.