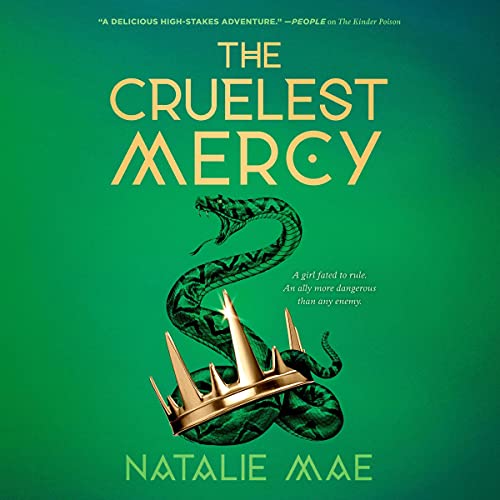 In this sequel to The Kinder Poison - which People magazine proclaimed a "delicious high-stakes adventure" - the magical kingdom of Orkena is on the brink of war, and the only person who can save it is Zahru, the girl they once doomed to death.

After surviving the Crossing, Zahru has sworn off adventures. While Crown Prince Jet navigates the looming threat of war, she's content to simply figure out what the future holds for them. But they're dealt a devastating blow when prince Kasta returns with a shocking claim: He's the true winner of the Crossing and the rightful heir, and he bears the gods' mark as proof. Even more surprising - he's not the only one.

Somehow, Zahru possesses the very same mark, giving her equal right to the throne. The last thing she wants is to rule beside her would-be executioner, but she can't let Orkena fall into his merciless hands. So Zahru, Jet, and their allies must race against the clock to find a way to stop Kasta, because once he's crowned, there's no telling what horrors he'll unleash to win the war.

Zahru will do whatever it takes to keep Kasta from taking the throne...but to stop a villain, is she willing to become one herself?

"In this charming, well-rounded follow-up to The Kinder Poison, Zahru’s entertaining, funny narrative voice continues to engage and balance out the otherwise heavier tone of a story that deals with power dynamics, dark magic, horrific betrayals, and social injustice and that offers a thoughtful examination of just what a ruler should be willing to sacrifice for the greater good. A fantastically rewarding sequel." (Kirkus, starred review)

What listeners say about The Cruelest Mercy

The person reading does a great job capturing the different voices, along with the dialects of the characters. I had no problem understanding who was talking or when we were in the Main Characters mind versus her actual dialogue.

In regards to the storyline, you have to read the first book to understand what is happening. I loved Zahru’s character arc in this book. I am a sucker for redemption stories and I can’t wait to read the 3rd book when it comes out. I don’t know how to feel about the ending. I don’t believe you can strip a whole part of a person that makes them who they are and then expect for everything to turn out fine. I’m excited to see where the author goes with that. Definitely recommend this book and this audible version of it.

So close to skimming toward the end

The story started off really great and as time went on homegirl continued to get more and more and MORE annoying to the point where I could’ve just stopped listening to the book all together. And I could go on about this for probably hours but I won’t. The ending was OK-ish but I have no huge desire to read and or listen to the rest of the series. Jesse Vilinsky did a great Job narrating!

This story is so amazing! Natalie Mae created a world I do not want to leave and Jesse Vilinsky brought these characters to life.

I've already re-started book 1 since I'm not ready for the story to be over yet!

This book was hard to listen to because it wasn’t your conventional ‘the hero overcomes their demons’ story… it was a much more honest human experience than that.
We are returned again to the beautiful desert landscape painted by Natalie Mae. The level adventure was brilliant and the characters were rich. This book flows on nicely from the first book.
I found the main character to be incredibly stubborn, however, this made the turning points all the more sweet.
I would have loved more romance but that’s because I’m a complete sucker!
Overall, brilliant. I would recommend this series if you want something with gorgeous imagery, adventures, keeps you guessing (usually wrong), and has serious moments in the mix of the fun.

I wish I would get a refund. I'm so filled with self loathing for hoping this would build on the first book. The MC became evil and manipulative and entitled. The storyline just became ridiculous and silly. It was unbelievable, the plot was unconvincing, I did not believe that the MC was capable or should become ruler.
I strongly do not recommend. It was a let down.