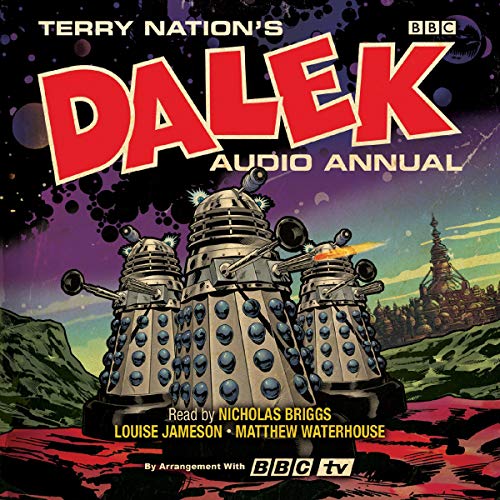 The Daleks rampage in this collection of vintage stories from Terry Nation’s Dalek Annuals of the 1970s.

Urgent message to all Anti-Dalek Force agents: the Daleks are coming! Defend yourself with The Dalek Audio Annual, packed with exciting tales of galactic terror, global invasion and the adventures of plucky human resistance fighters.

Order your copy now. It is your duty to remain informed of progress in the ongoing battle between humans and Daleks!

What listeners say about The Dalek Audio Annual

A little short but worth the money to hear some classic Doctor Stories. The narrators were very good.

[Future] historical points in Dalek invasion history are presented. The Daleks are coming. Be ready.

These are stories taken from the pages of the 1970's Daleks annuals. Quite interesting to hear this range of stories that are influenced by, but technically outside Doctor Who canon. Great performances by the three Doctor Who alumnus here.

This curiosity is very literally a trio of actors reading out short stories from the 1970's Dalek annuals.

Although the readers themselves do an excellent job, that can't disguise the fact that the Dalek annuals were aimed at pretty small children. The stories are fine, for that particular audience. But actual small children won't be buying this book.

So while it's nice to see the Daleks represented as an evil technological (but not all powerful) empire, and to hear their voices shouting "Exterminate!", the stories lack the science-fiction brain twisters, ethical dilemmas, internal conflict amongst the heroes opposing the Dalek's, really cunning Dalek plans, or dystopian environments associated with Dalek stories in Doctor Who (or within the 'Dalek Empire' audio stories).

I owned a Dalek annual (presumably from a jumble sale) and I remember the android character who evidently made up the protagonist for a great many of the stories. I remember that I enjoyed his sneaking around the Dalek capital in that annual. But the style of story is much less thrilling to an adult, who can predict that the android's undefined abilities will be used to physically outrun, overpower, or outwit the Dalek's, removing all sense of peril.

This is an interesting nostalgia trip, and was probably a labour of love for it's creators. However, it's not all that good. It's also short, although, given the material, I'm not upset asbout the length. This should only be a cheap novelty piece. Unfortunately it's actually fairly expensive. The main value of this product is not drama, but nostalgia and also as an historical curiosity (it's very 70's - or, rather, it's very 50's or 60's in style, but it was *actually* made and loved in the 70's).

In sum, despite the quality acting and the nostalgia factor, it's my duty to warn potential buyers that it's not actually very enjoyable. Save your audible credits for something more substantial both in quality and length.

Dalek nostalgia from the 70s

This took me back to the late 1970s, when Christmas meant hoping that Mum had bought me the latest Dalek annual (she did. Thanks Mum!), then diving into the colourful pages to devour these dark tales of the deadliest enemies of humanity. Without the presence of the Doctor, these stories often ended very badly for mankind, which somehow made them even more enjoyable.

This selection of stories and features from the annuals is a delight. Narrated by Nicholas Briggs, Louise Jameson and Matthew Waterhouse, there’s a lot to love here.

Highly recommended for Dalek fans of a certain age!