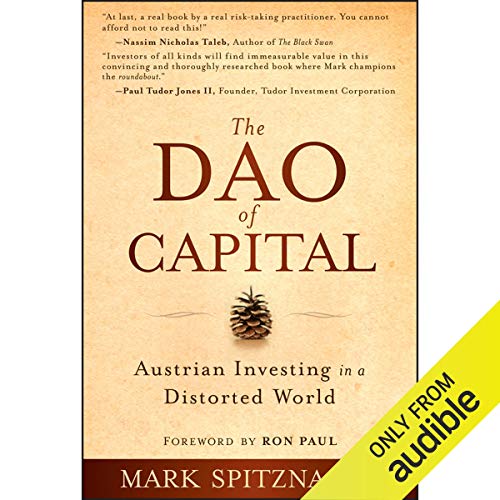 The Dao of Capital

As today's preeminent doomsday investor Mark Spitznagel describes his Daoist and roundabout investment approach, “one gains by losing and loses by gaining.” This is Austrian Investing, an archetypal, counterintuitive, and proven approach, gleaned from the 150-year-old Austrian School of economics, that is both timeless and exceedingly timely.

In The Dao of Capital, hedge fund manager and tail-hedging pioneer Mark Spitznagel—with one of the top returns on capital of the financial crisis, as well as over a career—takes us on a gripping, circuitous journey from the Chicago trading pits, over the coniferous boreal forests and canonical strategists from Warring States China to Napoleonic Europe to burgeoning industrial America, to the great economic thinkers of late 19th century Austria. We arrive at his central investment methodology of Austrian Investing, where victory comes not from waging the immediate decisive battle, but rather from the roundabout approach of seeking the intermediate positional advantage (what he calls shi), of aiming at the indirect means rather than directly at the ends. The monumental challenge is in seeing time differently, in a whole new intertemporal dimension, one that is so contrary to our wiring.

Spitznagel is the first to condense the theories of Ludwig von Mises and his Austrian School of economics into a cohesive and—as Spitznagel has shown—highly effective investment methodology. From identifying the monetary distortions and non-randomness of stock market routs (Spitznagel's bread and butter) to scorned highly-productive assets, in Ron Paul's words from the foreword, Spitznagel “brings Austrian economics from the ivory tower to the investment portfolio.”

The Dao of Capital provides a rare and accessible look through the lens of one of today's great investors to discover a profound harmony with the market process—a harmony that is so essential today.

I'm not sure what I expected from this book. But the depth of scholarly thought and academic review and history of economic thought exceeded my expectations. this book does a great job of giving a story with illustrations while providing enough analytical thought 2 make this a a fun read and cause me to recall some old satistics jargon.

Give this book time as the author sews together seemingly unrelated ideas and formulates for the reader a new roundabout way to view the world and the financial markets.

The history is insightful and the approach fascinating and the stories and analogies keep the reader engaged. You won't find this high quality content outside of reading the classical Austrian economics books, which being further removed in time make relevancy arguments the easy critique. This book is destined to be required reading as it is relevant in the here and now and yet overlooked much like Austrian economic theory remains to this day.

An incredibly well detailed write up.

It's difficult to ignore the message conveyed here by Mark. I have re-read this severally and still pick up new information each time.

Very dull, and very long, despite some good info

It could have been condensed to three chapters and the book would've been much more effective. Most information given is not directly related to investing. Also, many words and phrases are repeated over and over again throughout the book. Maybe it was poorly edited? Many books on investing are padded with unnecessary pages, but this one takes it to a whole nother level.

I am trying to learn more about Austrian Investing, but this book seems to be a lot more religion than finance.
Also, the narrator is so dry that my mind keeps drifting.

I liked the descriptive mindset of the roundabout and how it is applicable in life as well as investing.

Of course Mark won’t divulge all his secrets but it would still be nice to learn more about how to maximize productive capital. My journey in Austrian economics continues...

Lastly, I can’t seem to find the accompanying PDF anywhere. It would be great to have a look at that.

it's just opened my mind or should I say blew it..

It was probably one of the most important books I've read all year a must read for sure...This roundabout strategy is so unnatural for us and yet it is the key to our victories in life to master this skill will definitely put you above the rest.

If you could sum up The Dao of Capital in three words, what would they be?

Would you be willing to try another book from Mark Spitznagel and Ron Paul ? Why or why not?

Yes, but only in print. References to figures and complexity of the ideas make this inaccessible as an audiobook.

What does Jeremy Arthur bring to the story that you wouldn’t experience if you just read the book?

This isn't a novel, but rather a non-fictional treatise. The undramatic reading was appreciated.

The 'equity Q-ratio', defined in terms of publicly available published economic data, and representing an indicator of the amount of systemic distortion due to monetary policy. I had not heard of this indicator before, and this makes me hungry to learn about other less-commonly discussed indicators.

Excessive use of metaphor (esp. the conifer vs. angiosperm). A whole chapter is devoted to biology, and this adds only marginally to the discussion of investing and capital. Similarly, the story about Siegfried, Johann, and Gunther was oversold as a rhetorical device.

I have mixed feelings here. Daoism and capitalism, in their own spheres, are main interests of mine. I have, at turns, groped for syntheses between these. I have thought a good synthesis might prevent the people of the world from self-annihilation in the face of our greatest self-imposed risks, and help fulfill our human dreams alongside the survival of other of the world's wonders. The ingredients are there. All this created a high bar of expectation here. I am glad this author for took an early shot. But has not arrived at any far shore. He doesn't close the sale, for me. He wanders off and loses momentum in tangents.
I had wanted a closer look at the Austrian thinkers. They were quirky, cranky, signposts on the way to certain analytical tools nowadays much more (I think) elegantly and efficiently phrased. Menger, it appears, was (to my eyes) a significant nut, a self-appointed apocalyptic visionary resembling Marx in the tone and nature of his overconfident bitter future-historicist rants. I praise the author (a fan) for not soft-pedalling these aspects of the man and his thoughts. Menger seems to have damaged the Austro-Hungarian royal family enough by tutoring its scion with his crackpot visions, right into the kid's suicide. I come to see Austrian thinking as far better than Marxism, of course, if those are the only choices, but almost as 19th century and quaintly absolutist-blinkered as its hated ideological cousin. And this goes for those contemporaries who cling too stiffly to this ideologically-drenched one-sided view of everything as somehow bearing "the solution" -- advertising their intellectual mediocrity certainly, as one has to ignore huge swaths of history and reality to do this. But of course, even fairly intellectual humans (like this author) seem mostly only capable of climbing one or two ideological hills, and there they reach a limit (from which they often try to intellectually horsewhip their peers and drag them into their little stunted domains). A look at today's Congress is my exhibit A, and some of these torches-and-pitchforks factional hicks are now setting fire to respectable American conservatism as a political force. As but one side of yin and yang, rampant runaway individualism has its hazards, no? So I saw the detour to Austrian economics as taking a bit of a weird turnoff: as if exclusivist self-elevation (hello -- privatizing capital-profit?) could be superimposed on the awe and balance and self-diffusion of Daoism, and the two called the same thing. In Daoism, I do see some resemblances with the Austrian school ideas, in the recognition of self-organizing equilibria in society as ideals. But connecting these dots in this author's attempts, by more than in a few vaguely stimulating thoughts, is a stretch too far here. It becomes a wrestling match posing as harmony. The synthesis remains beyond our reach, though it is glimpsed. The differences are still as glaring to an informed reader as the resemblances. Yes, self-organization is good, and small government is Daoist-compatible. Okay, but, we are not admiring cicadas in lovely rivers heading for the sea. We are living in a world where the Mekong river is being systematically changed beyond recognition in a few nanoseconds of historical time. So scale up and get real. Talk about a real world. Vast swaths of things beloved of a taoist aesthetic are being erased. Face it, don't simply whitewash it.
This author loves his university-educated eloquence, and yeah, I talk like that too: I love big and rare words, and the golden sound of my voice prattling on. A good mature professor (or advocate, or writer) learns to make the point and then, if nothing is to be added, stop. Alas, this profusion subtracts from effective communication. This author completely lost the elegant compactness of the Tao te Ching. This thing could easily have been a third as long, and made its points about roundabout-ness better. The author self-consciously observes he is being very roundabout, perhaps fancying he is conveying something of Daoism itself, but the effect is the opposite: he is the erudite over-wordy person the Tao te Ching criticizes, lost in excessive intellectualizations. I recall a creative writing teacher at university, admonishing me, that in writing of boredom, one should not be boring. The same would go for needless circuitousness. Being a wanderer and daoist in temperament and habits, and a business practitioner and scholar, I AM the target audience here. I enjoy the winding roundabout discussion by default (though here the pine cones thing for example is five times too long, beating the point into the ground and lacing it all in needless technical jargon). The dilemma of the annihilation of the pines and their noble longevity by a callous capitalism in nanoseconds of profit-seeking and vain human self-worship is nowhere addressed. Austrianism lacks the self-regulatory mechanisms we need to trace and identify, or even words for such things: these things were beyond the imagination of these old fellows. Their world was functionally endless for them, to be expanded into with untrammelled human will and action. These dilemmas unreached are a dealbreaker to what this work might have been. Perhaps some other mountain climber will take up this task and advance the work.

Dont think too hard. Get this book and devour it. That is all i have to say.

Made me feel intelligent

This is one I shall have to listen to many more times to draw full benefit from. I am no stock market guru but I am hearing things that I plan to find relevance for in my financial activities .

is it finished yet?!

I enjoyed the final chapter. The authors perspective, and indeed an Austrian perspective, on "value" investing and on such luminaries as Ben Graham, was worthwhile and interesting.

The rest of the book, however, takes itself very seriously. I found it preachy and repetitive. The key points, whilst having merit, are laboured to the point of tedium.