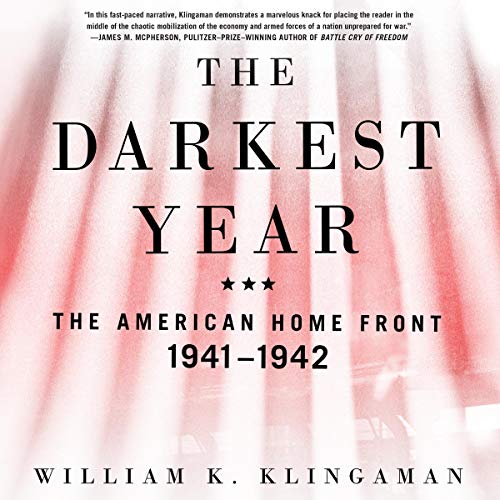 The Darkest Year is acclaimed author William K. Klingaman’s narrative history of the American home front from December 7, 1941 through the end of 1942, a psychological study of the nation under the pressure of total war.

For Americans on the home front, the 12 months following the Japanese attack on Pearl Harbor comprised the darkest year of World War Two. Despite government attempts to disguise the magnitude of American losses, it was clear that the nation had suffered a nearly unbroken string of military setbacks in the Pacific; by the autumn of 1942, government officials were openly acknowledging the possibility that the United States might lose the war.

Appeals for unity and declarations of support for the war effort in the aftermath of Pearl Harbor made it appear as though the class hostilities and partisan animosities that had beset the United States for decades - and grown sharper during the Depression - suddenly disappeared. They did not, and a deeply divided American society splintered further during 1942 as numerous interest groups sought to turn the wartime emergency to their own advantage.

Blunders and repeated displays of incompetence by the Roosevelt administration added to the sense of anxiety and uncertainty that hung over the nation.

The Darkest Year focuses on Americans’ state of mind not only through what they said, but in the day-to-day details of their behavior. Klingaman blends these psychological effects with the changes the war wrought in American society and culture, including shifts in family roles, race relations, economic pursuits, popular entertainment, education, and the arts.

What listeners say about The Darkest Year

Unflinching recount of the US home front.

Wide-ranging and masterfully narrated. Our victory in WWII is made more impressive with this perspective.

A Well Documented Non Fiction of American Life in 1942

This is a well narrated audiobook about life inside America between the Attack on Pearl Harbor and the end of 1942. The story is about life within the United States mainly from the standpoint of civilian society, business, and government. It is not about military battles. I really liked this book.

I read the book on Kindle while listening. The audiobook is faithful to the Kindle text. As an audiobook I was easily able to follow the story while walking or commuting. I also double checked many details independently and found the details to be accurately reported.

The book also reports on social,issues, including injustice to African Americans, Japanese Americans, and women. I appreciated these reports. I learned a great deal. As far as the domestic aspect of American life at the beginning of World War II, I would not hesitate to recommend this book. Thank You....

Very well done use of clear well documented news of all that occurred during this historic time in our country. The detail of Dec 1941 after is outstanding with a real life view of the panic that occured

This book is one of those that would probably be better read than audibly listened to. It's much too clinical. It starts out relatively interestingly, and then slowly disintegrates into random, albeit uninteresting bullet points. So, much of the ideas are lost quickly on the listener. And the points overlap, so one point ends up where the last one started. This unfortunately doesn't play to narrator Stefan Rudnicki's strengths.