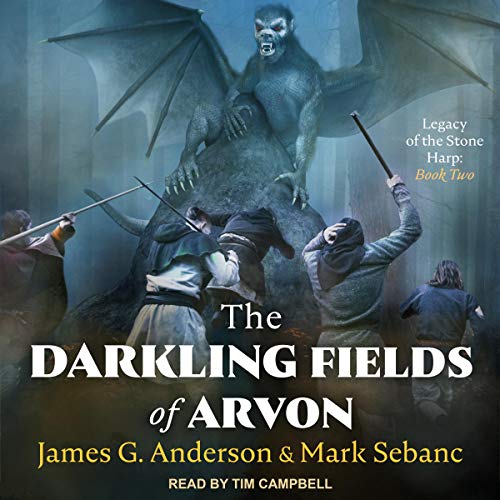 In the wake of the catastrophic invasion that has leveled the Stoneholding, the last bastion of order in the world of Ahn Norvys, Kalaquinn Wright pursues the mission entrusted to him. Freshly invested as High Bard, he sets forth across lands that lie under a dark cloud of uncertainty and strife, charged with the task of finding the lost Prince Starigan.

The task, however, will not be an easy one, for the Talamadh, the golden harp that binds together heaven and earth in sacred harmony, remains in the clutches of the tyrant Ferabek. After securing safe haven for the remnant folk of his clanholding, Kal and his companions venture into the lowlands of Arvon, a place of looming danger. Despite the adversities of a world sinking into the twilight of darkness and chaos, the young Holdsman keeps faith and its sustained by the loyalty of friends, the resources he begins to discover in himself, and unwavering hope.

By fate's caprice, Kal falls prey to his enemies. In the trial that befalls him, his mettle is tested, and he draws upon an inner strength that he has never known before. But will it be enough to stem the tide of chaos that floods over the Darkling Fields of Arvon?

What listeners say about The Darkling Fields of Arvon

I really enjoyed the first two books in the series. The narration was excellent. The characters were well developed, and the story had me from the beginning.
I only wish I had looked a little deeper at the series. The first two books were completed in 2009 and 2010 respectively. The series is languishing as no further books have been published .
I would not have started the series if I had realized this. Hopefully the authors will get together and complete the project. Ten years between books in a series is a long time.
Feeling left hanging
Steve B