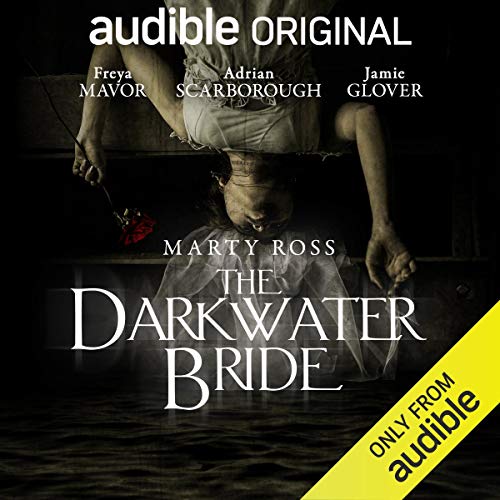 In late Victorian London, James Miller, a respected Scottish businessman, is pulled, dead and cold, from the Thames. Heartbroken and perplexed by his sudden death, his daughter, Catriona, is drawn into a mystery that soon reveals a dark underworld of secrets and corruption. She pairs up with local detective Culley for an investigation that stems deep into the grim, ghostly legends of England—particularly, that of The Darkwater Bride...and the power of her fatal kiss.

Ghostly Thriller With a Dark Heart!

This is another deeply atmospheric Audible Studios offering coupling a rich soundscape with some high quality acting which evokes a feel of the darkness that was much of Victorian London. It would be fair to call it a piece of Victorian Noir as what begins as a young girl's attempt to find out what happened to her father descends into the seediest and darkest corners of a depraved city. It's also truly a ghostly tale and most definitely not one for those who like "cozy" mysteries.

I wouldn't rate it quite as highly as say the wonderful "Scarlet City" out of these Audible productions as it is a little repetitive in terms of the relationship between the two main characters; the poor hapless Culley striving to keep his feisty female companion in what he saw as her place. And some of the acting is also perhaps a little overwrought at times but it's a very enjoyable play all the same overall which builds up to what I thought was a thoroughly satisfying climax.

A genuine ghostly thriller with a dark heart, well worth a credit.

41 of 43 people found this review helpful

Best listen since getting Audio

12 of 14 people found this review helpful

An excellent and novel story, extremely well performed and executed. I really couldn't put this one down. It's great to hear the sound effects and dramatisation, nice one.

First off. I HATE horror stories or crimes on audio books. Most of them are boring or not scary at all. And this book was for me personally not scary or super complex with crime...
...But.

Thru all my entire list of audiobooks (I got too many) this instantly landed on my top 3!! Never expected; as I felt like a child hearing his first ghost story, like a young adult feel his first love to women's voices, and the love for true good old British accents. I still can't believe I was so captured.

Acting and the narrators: I sometimes end a book quickly if a narrator breath too much, make too much S'hissing noises or being too flat and lifeless. But these performers made me truly laugh on my bus home, in public, as I got so impressed by the sound and their performers. Honestly I don't know if I if I would read this book on my own as it quickly would dismiss it as another average book (which is just me being too rude and impatience as it's a well written book). But, knowing how good a theatre performance can sound like, I gave it a small chance, and I TRULY found a hidden gem!

Good story overall, with lovely descriptions, not too much and too heavy, but greatly added actions in between. I find "great readers" often describe way too much, so I close the book or audio-book way before the end. The combined creepy descriptions of eels, blood, corpses to touch of love, sensuality and the focus of courtesy in this era... well I just love it!!

Thank you so much for making me stay up all night for this astonishing performance! Well worth the money!

ps: sorry for the long review, but I don't care. It's well deserved!

10 of 12 people found this review helpful

A brilliantly dark ghostly tale that examines the sexual perversity of men in the Victorian era and, let's be frank, today at a time when misogyny is on the rise and violent crime against women remains high. Given the subject matter, it makes sense and balance to have a strong female narrator who combines a certain vulnerability with a dogged determination to find out about her father's secret life and how and why he died.

7 of 9 people found this review helpful

Will have you believing in ghosts

Excellent book and great narration from the whole cast. Very enjoyable story that will have you believing in Victorian ghosts!

This book was brilliantly brought to life by the cast but it’s not a book I’d recommend.

Great story but could have done with some editing

Overall I enjoyed this production. The performances were excellent although I had not appreciated it was a play and not a bok (served me right for not reading synopsis properly) However I found the scenes describing the various depravities overlong and even gratuitous. I could easily have skipped the majority of the scenes in the theatre and still got the point being made. Also Miss Miller's dialogue where she just repeated and reflected the words back (others were also guilty of this technique) became very tedious. However on the whole I would recommend this book.

This drama was so enjoyable, the narration, music and atmosphere very very good. I really enjoyed this and walking the dog listening to this, I kept looking behind me!