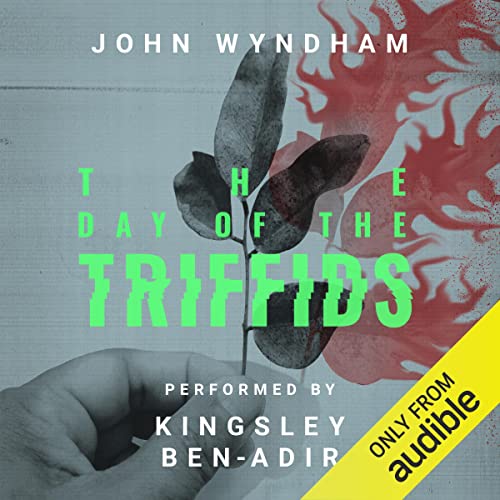 The Day of the Triffids

In 1951 John Wyndham published his novel The Day of the Triffids to moderate acclaim. Fifty-two years later, this horrifying story is a science-fiction classic, touted by The Times (London) as having 'all the reality of a vividly realised nightmare'.

Bill Masen, bandages over his wounded eyes, misses the most spectacular meteorite shower England has ever seen. Removing his bandages the next morning, he finds masses of sightless people wandering the city. He soon meets Josella, another lucky person who has retained her sight, and together they leave the city, aware that the safe, familiar world they knew a mere 24 hours before is gone forever.

But to survive in this post-apocalyptic world, one must survive the Triffids, strange plants that years before began appearing all over the world. The Triffids can grow to over seven feet tall, pull their roots from the ground to walk and kill a man with one quick lash of their poisonous stingers. With society in shambles, they are now poised to prey on humankind. Wyndham chillingly anticipates bio-warfare and mass destruction, 50 years before their realisation, in this prescient account of Cold War paranoia.

About the author: John Wyndham Parkes Lucas Benyon Harris was born in 1903, the son of a barrister. He tried a number of careers including farming, law, commercial art and advertising, and started writing short stories, intended for sale, in 1925. From 1930 to 1939 he wrote stories of various kinds under different names, almost exclusively for American publications, while also writing detective novels. During the war he was in the Civil Service and then the Army. In 1946 he went back to writing stories for publication in the USA and decided to try a modified form of science fiction, a form he called 'logical fantasy'.

What listeners say about The Day of the Triffids

Fantastic story very well-written. Spoiled a bit by over-hurried narration and a lot of 't's lost - be'er (better), ye' (yet), go' (got). No reason the protagonist shouldn't use demotic English except that there is nothing in the book that supports that (certainly no glottal stops). But I cavil ...

The narrator is so droll and tiresome I couldn’t even finish this novel. Sounds interesting though, might get a hard copy and read it the old fashioned way.

The narrator was so dull and monotone. I did not enjoy the reading at all! I recommend you listen to a sample before purchasing this version.

I lasted about 20 minutes before I gave in and admitted that the emotionless drone was robbing me of the will to live. What a shame.

good story, not so good narration

I like this book, it's a classic and it's so easy to imagine the environment, however the narration did not suit the style of the writing AT ALL!!! The narrator has a strong London accent and his attempts at different characters was just cringe inducing. I'd listen to it again because I like the story but I don't think I'd listen to other books performed by this narrator sorry.

Back in the late 1970s this was a set text during high school... not sure why, but for some reason I neglected to read it. Better late than never. e
Enjoyed the philosophical side of the story. Thought provoking!