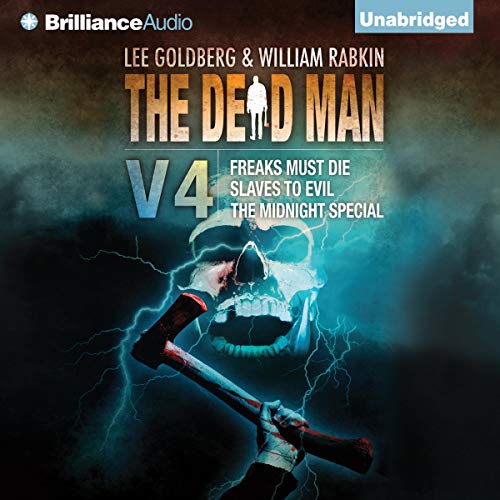 Matt discovers an underworld of people with uncanny powers living in the shadows of New York City, all trying to elude a dark force that’s ruthlessly hunting them down in Joel Goldman’s “Freaks Must Die”. Now Matt must save the “freaks” from bloody annihilation.

In Lisa Klink’s “Slaves to Evil”, Matt is trapped in a small town between hordes of deranged, killer cops and an innocent girl hell-bent on seeking bloody vengeance from him for the killing of her brother.

A cheesy 1970s zombie flick is sparking horrific bloodshed whenever it’s screened in Phoef Sutton’s “The Midnight Special”. Matt is determined to stop the madness, leading to a night of unmitigated terror in a grindhouse theater that more than lives up to its name.

What listeners say about The Dead Man Volume 4

I can't get enough of this series. Keep up the great work! I seriously need to buy an ax lol.