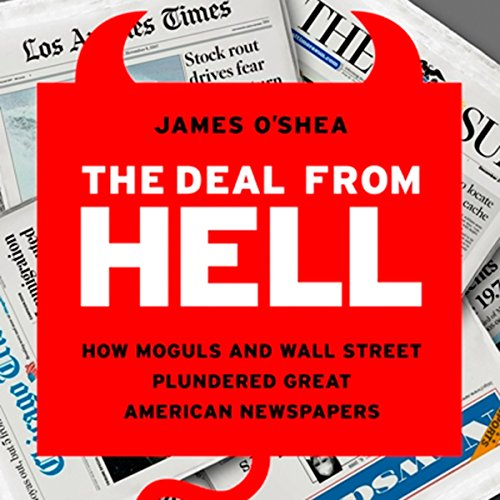 The Deal from Hell

In 2000, after the Tribune Company acquired Times Mirror Corporation, it owned the most powerful collection of newspapers in the world. How then did Tribune nosedive into bankruptcy and public scandal? In The Deal From Hell, veteran Tribune and Los Angeles Times editor James O'Shea takes us behind the scenes of the decisions that led to disaster in boardrooms and newsrooms from coast to coast, based on access to key players, court testimony, and sworn depositions.

The Deal from Hell is a riveting narrative that chronicles how news industry executives and editors - convinced they were acting in the best interests of their publications - made a series of flawed decisions that endangered journalistic credibility and drove the newspapers, already confronting a perfect storm of political, technological, economic, and social turmoil, to the brink of extinction.

"Numerous books have covered endangered daily newspapers, but few relate the sad saga from the perspective of a top editor with investigative reporting experience…. Given O'Shea's level of detail and candor, some journalism icons will almost surely lose respect within their field…. A spirited, fascinating insider's account of a troubled realm." (Kirkus Reviews)
"This book is a passionate and heavily researched account of the case against the cyber-utopians." (New Statesman)

Be careful - this could happen to you. That's one of the central messages of former LA Times Editor James O'Shea's The Deal from Hell, which outlines how a bunch of intelligent, well-meaning industry professionals tanked what had, just 10 years prior, been a thriving American newspaper trade. O'Shea almost goes as far to suggest that if you're starting to hear the word "synergy" a lot in your office, you might want to think about a career change.

The "deal" initially referred to the bizarre take-over of Tribune Company by real estate cowboy Sam Zell, but more broadly came to refer to the merger of Tribune (The Chicago Tribune) and the LA-based Times Mirror (The LA Times). Using that deal as a prime example, the book tackles a wide range of problems that have befallen the newspaper industry in the last few decades. Through the lens of these specific mergers and acquisitions, we get a broad spectrum through which to view these problems in realistic ways.

On one level, The Deal From Hell is about all the problems in the modern American print journalism industry. First, the old newspaper families grow conflicted and unsure. Next, the bean-counters take over. Before we know it, management is demanding the demolition of the invisible wall between the business and editorial sides of a number of esteemed publications. Through it all, O'Shay guides us on a painful step-by-step process of what went wrong and how. Like watching a car crash in slow motion, we're given ample information at every turn to anticipate the arrival of all the most cringe-worthy moments.

On another, perhaps more significant level, this book is about how numbers-driven values are also eroding our world at large. At every turn, managers scheme to slice costs, fraudulently increase circulation numbers, and make cut after cut to the work force actively covering the news. Rome really starts burning with the arrival of the nutty Wall Street types, who ride in on a tide of big bank financing, office pinball machines, and sexual harassment suits. O'Shea subtly hints that it's not just the news at stake anymore, as our whole society becomes about profits and losses, zeros and ones.

The frank, honest narration of L.J. Ganser makes us feel as if we've been privy to the backroom wheelings and dealings of the business side, as well as the tense interactions of reporters on the newsroom floor. And, while The Deal from Hell might not be a comprehensive guide to the downfall of all western print journalism, it's definitely one hell of a story. —Gina Pensiero

This is a great listen! The level of deal detail is great. The pictures painted of the people involved is worth hearing about all by itself!

Look around the country and there is no doubt that America’s newspapers have been in a state of decline for sometime. James O’Shea, however, tells the story of this state of affairs from the perspective of a top editor. In The Deal from Hell: How Moguls and Wall Street Plundered Great American Newspapers, he relates how owners such as Sam Zell, Lee Abrams and Randy Michaels drove their papers into the ground. Along the way, he opens the curtains on what took place behind the scenes. This story will not be of interest to everyone, but will be informative to all who read it. O’Shea covers some old ground, but the review places this story in context. He spends a large amount of time on details which are tangential to the story, but extends the reader’s understanding and adds a great deal of color. Anyone interested in the decline of newpapers in the US and in media in general in that context will be rewarded by reading this book. The reading of L J Ganser is excellent.

When I think about the newspaper, I always assume as old media, but most of the population in the world get their news on print. I am writing this a few days after the bombing in Boston. Ironically, the next day after the tragedy, I saw more people reading this headline on print, instead of viewing it on a glowing tiny screens.

Maybe the newspaper should only print the paper when something major happens in our society. Most day to day news are just fluff pieces that is just taking up space. Do we have to know last night's sports scores, outdated stock quotes, the weather, or Lindsay Lohan. How is this news worthy?

I can't remember when I bought the newspaper. You actually have to go out of your way to buy the paper and pay for a subscription and having to deal with the physical paper is just dumb. It's not worth my time to recycle the paper.

"The Deal from Hell" is a good read. I actually learned a lot for listening to James O'Shea's experience at running the newspaper. The newspaper is an old boys club, where ink on paper is becoming a dinosaur.

I just hope that a Postmaster will write a book on the Post Office and see how they have no business and where 100% of the mail that they deliver is just SPAM.

The truth about the decline in newspaper

James O’Shea attempts to paint a picture on how the media has been transformed due to big business. I think he gives a face to what most of us already know. Personally I still recall how the white house leaked a story to a journalist.. then the journalist wrote the story …then the white house said the story was credible due to the news article – yep that type of circle represents what we seem to be losing, oh and if you are looking for that tale it is not in this book.

I found the book to have a good flow and it was well done. There were parts where I wished he went into more detail, like after the initial press room cuts what happened to reporters do they go somewhere else change careers? Are those that are left forced to write more? The tale Mr. O’Shea tells about how the Tribune Company started to fall in part due to the loss of advertising revenue and in part to the mismanagement of the paper itself. The book leaves one to wonder in times like these where we so desperately need unbiased news media if not papers who will fill that role?