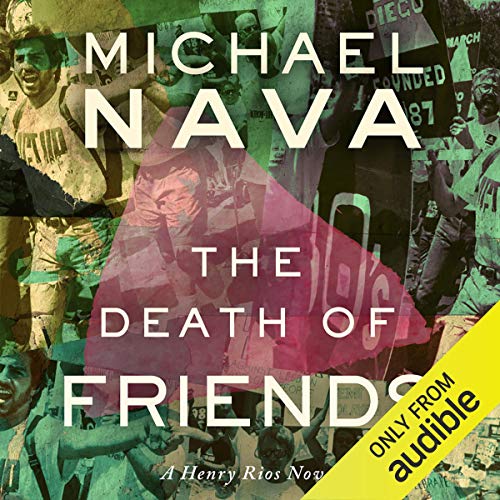 Winner of six Lambda Literary awards, the Henry Rios mystery series is iconic and Michael Nava has been hailed by the New York Times as "one of our best" writers. Originally published during the darkest years of the AIDS epidemic in the gay community, The Death of Friends received extraordinary praise both as a mystery and an eloquent work of witness. Publishers Weekly said, "This is a brave, ambitious and highly impressive work." The San Francisco Chronicle described it as "A beautifully executed novel, with a classic whodunit at its core." And People magazine said, "Nava can devise as canny a plot as he can a defense motion. His latest, though, has something special - the scent of memory that lingers as poignantly as a departed lover's cologne."

What listeners say about The Death of Friends

These books break my heart

While the opening, as well as the title, of this book hinted at things to come, there were still surprises waiting. Then again, I feel that’s par for course with this series.

An old friend of Henry’s, well his first love to be more precise, ends up murdered, Henry finds himself in the position to defend the person the police suspect killed him. Soon he realises all is not as they seem and he starts looking into the case. Trying to unravel his friend’s past and present reveals devastating secrets for all involved. At the same time this is going on in his professional life, Henry’s private one is heartbreaking. Josh isn’t doing well, hasn’t been well for some time now. Sadly it’s only a matter of time, and that fact is casting darker and darker shadows over Henry’s life.

But it’s not only everything that was happening with Josh that affected him, obviously losing a friend and colleague also took its toll. And we learnt that cost by taking a few trips down memory lane, getting to know a young Henry falling in love for the first time, finding himself in precarious situations. Each time we get a glimmer of Henry’s life we gain a better understanding of the man we meet (his) present day.

The case was interesting and intricate. I love how there are so many threads to untangle to get a full picture, and at some point you end up suspecting everyone. It’s thrilling. I love procedurals, so these books are a treat for me. But for those of you that aren’t fans of this particular genre, or need romance in your books, you might want to consider something else. But if like you like me can’t get enough of this genre you are in for a good time – figure of speech, as these books are rarely happy. But they are soo good.

I love Thom Rivera’s baritone voice, he genuinely fits Henry and really captures his personality. A bit stand-offish, but hiding so many emotions underneath. Rivera captures all that and more. Nava and Rivera takes you back in time and make you see it all so vividly, they make it come alive making you feel like you are back there experiencing the injustices, prejudices and life as it was back then. They also make you feel like you are fighting beside Henry, doing the best he can to even the odds. I can easily listen to Rivera for days on end, so I’m grateful I have another two books to go.

As always there were twists I didn’t see coming and I’m grateful every time that happens even more so as I’ve had this happen with a few books lately. I’ve grown weary of predictable books, but these are anything but. I can’t wait to pick up the rest of the series.

sad but as with all Nava's books life affirming as well. I love Henry Rios. I have only one book left to read in the series and although I usually don't reread I know I will come back to this one. Thom Rivera is a pleasure to listen to.

I’m loving these novels. They are all so very well written. I’m liking how the author is growing as well. It’s surprising how effortlessly he adds complexity to the narrative. I would love to read a non mystery fiction from the author. I love magical realism. I wonder how he would do with it. It would be such a fresh perspective.

The Henry Rios mysteries is such an awesome series. This one connects to Henry’s past and sheds some light on Henry’s current situation as well. The mystery was well plotted. I thought I’d figured out early on but I was taken by surprise. Excellent narration.

Vividly and evocatively bringing an era to life. Not always easy to be with but so worth the effort. I have the hugest respect for this series and Michael Nava.