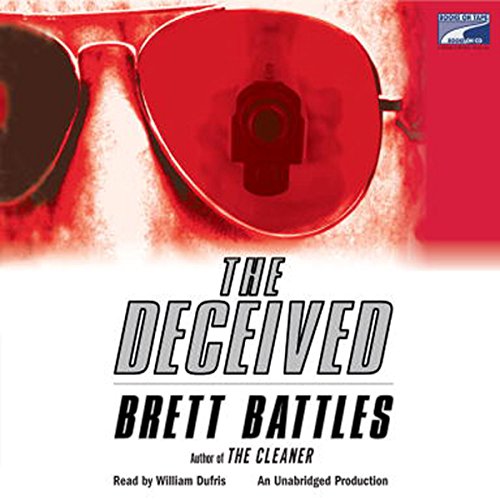 Brett Battles won rave reviews for his debut novel, The Cleaner, which introduced hero Jonathan Quinn. A freelance operative and professional "cleaner", Quinn knows better than to get emotionally involved in any of his jobs. But in this superb powerhouse of suspense, Quinn's latest job is different. A friend and old colleague has been murdered. A woman has gone missing. And for Jonathan Quinn, this time it's personal.

Anonymity. Trust. Professionalism. In his world, Jonathan Quinn has a few rules. He'll get rid of bodies that have to disappear; nothing ever gets traced back to him. But when Quinn is called to a busy Los Angeles port where a shipping container has just come in from the sea, it's clear his rules have been violated. Inside the crate is a dead man - a man who once saved Quinn's life. And while no one knows how CIA agent Steven Markoff died, Quinn has to do more than clean. He has to find Markoff's girlfriend, Jenny. To tell her that Markoff is dead. To find out why someone sent Markoff's body to him.

Until a week ago, Jenny Fuentes was an assistant to an ambitious congressman. Now Jenny is missing, too, and a lot of man power is making sure she isn't found. But Quinn has his own man power. He has tools that can pry into secrets held anywhere in the world. He has the skill to trade blows with killers and spies. And he has covert weapons: his eager and smart apprentice, Nate, and brilliant Orlando, his closest friend, who's saved his life more than once.

Racing from the corridors of power in Washington to the bustling streets of Singapore, Quinn won't stop until he uncovers the truth behind his friend's violent death, the astounding reason Jenny has vanished - and what she knows about the most explosive deception of all.

What listeners say about The Deceived

What a mile churner! Loved it!

What did you love best about The Deceived?

Well crafted story, with twists and turns. Just when you thought you had it figured out......oops...

Aside from Quinn, Orlando... complex and great asset to Quinn.

Not having to read it myself!

yes, and almost did

Other reviews lambasted the reader, but they are unfair. Don't let that review stop you from getting this book! Glad to have ignored them!

After listening to the first book in this series and really enjoying it I was looking forward to the second but there were so many negative comments about the reader that I put it off till finally I thought I would take a chance; I am glad I did. William Dufris isn't Scott Brick but he does a decent enough job that I didn't find that he got in the way of the story. If you like the series don't let the negative comments regarding Duris's performance prevent you from trying out this listen.

Good book, Narration was a let down.

The Cleaner was a good book with an excellent narrator, Scott Brick. William Dufris is painful to listen to. When I started listening to ???The Deceived,??? I had to check the title on the IPOD to make sure I didn???t down load a western. Dufris adds a John Wayne twang when voicing Quinn. I was anticipating Quinn to utter the phase ???...but, Pilgrim, you caused a lot of trouble this morning; might have got somebody killed; and somebody oughta belt you in the mouth. But I won???t. I won???t. The hell I won???t!??? ??? McLintock (1963)
It is quite irritating. So much so, that this is the first review I have written. In and of itself not notable, but I have over 200 titles in my library. The only other time I was this disappointed in a narrator switch is when John Lee read George R R Martin???s "A Feast for Crows." I am happy to see Roy Dotrice is narrating Martin???s "A Dance with Dragons" and I am equally happy to see Scott Brick is back for Battles??? "Shadow of Betrayal."

"The Deceived" is a good book, but it may be worth buying at B&N and reading in lieu of spending 11 hours listening to Dufris.

I listen to the 8th book in the series first based on reviews. I really liked it and then went on to the 9thI decided I would do the whole series and went back to the first one. Gave that 4 stars and said Wow for the first one that was great I also liked it that Scott BRIC was reading all of them. I like to do a series one after another when its really good and especially if it has the same good narrator the whole time. I was disappointed they changed narrators and the story wasn't quite as good. quite frankly the women's voices all tended to sound the same and they were annoying and whiney. I also figured out a lot of the book ahead of time. still gave it 3 stars and I'll check the next one out and see. If this had been my first one I don't know if I would have listened to the entire series.

Would you listen to The Deceived again? Why?

Not by this narrator. He tried too hard and made it hard to buy into the story instead of just letting it unfold.

I'm glad to see that Scott Brick is narrating the remaining books in the series. He's worth paying more money for because he makes the story come alive.

Would benefit from a new narrator

Would you try another book from Brett Battles and/or William Dufris?

Would you be willing to try another book from Brett Battles? Why or why not?

Yes. If it had another narrator.

Would you be willing to try another one of William Dufris’s performances?

No. Mr. Dufris's interpretation of the characters made them all come across as either whining or peevish. Very annoying to listen to.

The plot line was a little confusing, but it worked itself out in the end. Following along was made more difficult because of the irritating narration.

The Deceived is the 2nd novel in the wonderful Jonathan Quinn series by Brett Battles. There are 10 novels plus a novel length prequel in the series. The prequel was released at the same time as The Destroyed which is the 5th novel in the series. In the first novel in the series, The Cleaner, Quinn is a guy who cleans up assassination sites after the paid killer has completed his task. Through the first 4 novels Quinn simply removes dead bodies and cleans up and does any appropriate investigation. With the release of the 5th novel, The Destroyed, the series turns into an espionage series with the protagonist still being Jonathan Quinn and the key character group expanding. The Deceived is very different from The Cleaner (the first novel in the series). Quinn's friend (and CIA agent) is killed in Asia and his body shipped to Quinn in a shipping container. Quinn takes care of the body and goes to Asia to find the dead man's missing girlfriend.

This is the only book in the series not narrated by Scott Brick. Narration is not even close to the standard Brick set in The Cleaner.

The Jonathan Quinn series is one of the very best of its genre. I recommend every novel in the series be listened to in order released except that the prequel be listened to first.

Good story but suffers for the narration

After thoroughly enjoying The Cleaner with Scott Brick as narrator I was looking forward to this one. The story was great but the narrator was disappointing. All the female voices sound whiny and the narrator can make suspenseful scenes seem dull. Glad to see Mr. Brick is back for the next one. 5 stars for the story but loses 2 for the narration.

This is classic Quinn. If you like the other books in the series you'll love this.

It is hard to listen the reader doesn't control his voice volume well. For me listening through car speakers it requires constant volume adjustment.

Brett Battles seems to have improved with time. This, one of his earlier Quinn stories, is not his best, but it is also prejudiced by a truly awful narrator