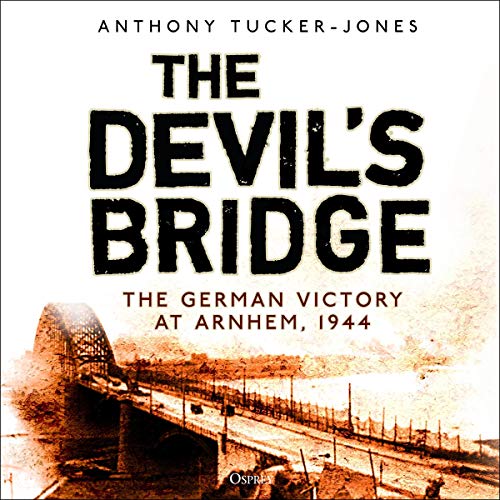 Bloomsbury presents The Devil's Bridge by Anthony Tucker-Jones, read by Roger May.

In the late summer of 1944, SS-Obergruppenführer Wilhelm ‘Willi’ Bittrich found himself in the Netherlands surveying his II SS Panzer Corps, which was in a poor state having narrowly escaped the defeat in Normandy. He was completely unaware that his command lay directly in the path of a major Allied thrust: the 17 September 1944 launch of the largest airborne and glider operation in the history of warfare. Codenamed Operation Market Garden, it was intended to outflank the German West Wall and ‘bounce’ the Rhine at Arnhem, from where the Allies could strike into the Ruhr, Nazi Germany’s industrial heartland. Such a move could have ended the war.

However, Market Garden and the battle for Arnhem were a disaster for the Allies. Put together in little over a week and lacking in flexibility, the operation became an all-or-nothing race against time. The plan to link the airborne divisions by pushing an armoured division up a 65-mile corridor was optimistic at best, and the British drop zones were not only too far from Arnhem Bridge, but also directly above two recuperating SS Panzer divisions.

This new book explores the operation from the perspective of the Germans as renowned historian Anthony Tucker-Jones examines how they were able to mobilise so swiftly and effectively in spite of depleted troops and limited intelligence.

"This is an important and timely operational analysis of events of September 1944. It is a mark of my respect for Anthony Tucker-Jones's work that I wish I had researched and written The Devil's Bridge. Thus I am more than happy to commend his scholarship to you." (Professor Peter Caddick-Adams)

"A gripping narrative from a less familiar viewpoint - that of Holland's occupiers." (Dr Graham Goodlad)

"A fine sense of detail and character makes this a thrilling and unusual read." (Tim Newark)

What listeners say about The Devil's Bridge

A bit challenging to stay focused on

I'm not sure why, but I found it difficult to stay on point with this book. The topic was of interest to me. But it took me a long time to get through and most of the time I felt my mind wandering. It wasn't the narrator. Too bad, because this is an interesting set of historical events.

I’m a huge fan of the works of Peter Caddick -Adams and as the man himself cites in the preface- he’d wished ‘he’d written it himself.’ This is praise indeed ; as this other double - barrelled historian shows similar depths of research, knowledge and new perspectives on the German reaction to Market -Garden. If Mr Caddick - Adam’s name had been on the cover , I’d have have been convinced it was his . This is only meant as praise for Mr Tucker - Jones . Recommended!

Very balanced and highly informative. completes the story of Market Garden in the same authoritive mode as such war historians as Max Hastings.