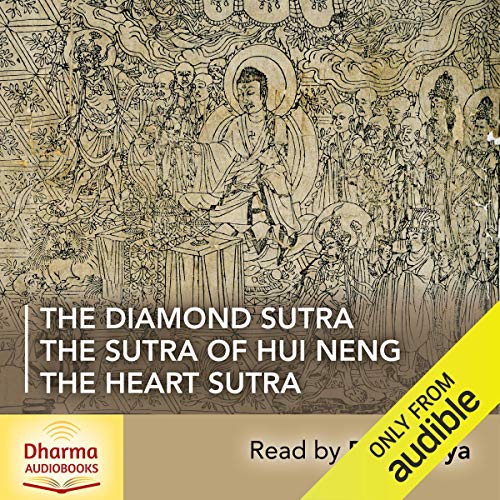 These three sutras are the most important texts for the Chan (Chinese) and Zen (Japanese) Buddhist traditions, though they are very different in character and provenance. The Diamond Sutra (Vajracheddikā Prajña Pārāmitā Sutra in Sanskrit) has the distinction of being 'the earliest complete survival of a dated (11 May 868) printed book’. It was found in the Dunhuang Caves in China in 1900.

The title, Diamond Cutter, outlines its purpose, which is to cut through ignorance to attain to perfect wisdom or ultimate reality. It is a relatively concise Mahāyāna text, using the Six Perfections (generosity, virtue, patience, spiritual vigour or energy, meditation and wisdom) to realise no-self and the emptiness of all phenomena.

Its origin is uncertain - even its date falls into a wide spectrum of somewhere between second and fifth centuries. The sutra is set in the context of a teaching given by the Buddha to the bhikkhu Subhuti who has asked for advice how to attain ‘supreme perfect enlightenment’. The translation used for this recording is by Wai-Tao. The Heart Sutra, another Mahāyāna text, is very different. It is short - barely 500 words - and is chanted, recited or read daily by many Buddhist communities across a wide range of traditions throughout the world.

It is placed in a teaching given by the Bodhisattva of Compassion, Avalokiteśvara to the bhikkhu Šariputra. Despite its brevity, it is rich in meaning and reference, covering a number of Buddhist formulations, including the five skandhas (form, feeling, perception, formation and consciousness) and the Four Noble Truths. The core message of the Sutra is ‘form is emptiness, emptiness is form’ - again the declaration that all phenomena are empty. Its origin (likely before sixth century) and even original language is unknown, scholars differing on whether it was first written in Sanskrit or Chinese.

The Nalanda translation is used here. The Sutra of Hui Neng is the longest of these three works, and is different again. It is a remarkable document, telling the history of the Sixth Chan Patriarch, Hui Neng (638-713), a semi-legendary teacher who, though uneducated and illiterate, gained enlightenment when accidentally hearing The Diamond Sutra being recited. Also called The Platform Sutra (Buddhist teachers in China traditionally preached from a podium) Hui Neng relates his history and his exegesis of The Diamond Sutra. In contrast to the two preceding works, The Sutra of Hui Neng is an unusually informal text, with the personality of the Sixth Patriarch coming across the intervening centuries with affecting immediacy. The translation is by Wong Mou-Lam. The three sutras are read with clarity and understanding by Ratnadhya.

What listeners say about The Diamond Sutra, The Heart Sutra, The Sutra of Hui Neng

the concept away from concepts freedom

listen to this brings me to tears Joy release a life of comfort and all kind... if you practice and ready...this can be the tot essence of freedom

Whether your interest is scholarly or religious, these Sutras are some of the best beginners texts for understanding Mahayana and Zen Buddhism. The Diamond Sutra itself is a powerful work that underscores the philosophical significance of the Buddhist mode of thought strongly, and with no uncertain terms. The Platform Sutra of the Sixth Patriarch is considered one of the foundational works for Zen Buddhism, and is, itself a fascinating read. If some of the terms and Buddhist jargon within is hard to follow (and it absolutely will be for an English speaker just starting out), I'd encourage either making or researching a list of terms of terms to use as a reference so you won't become terribly lost (or starting yourself out with some Alan Watts lectures, as he introduces many difficult concepts in ways that are much more approachable for the western mode of thought).

Found it pleasant until I didn't

I thought I could get past the accent of the narrator, but it started to get boring and hard to listen to. I am struggling to get through the Sutra of Hui Neng, it doesn't resonate with me. I will listen on and finish. I wish i would have just read the pdf.