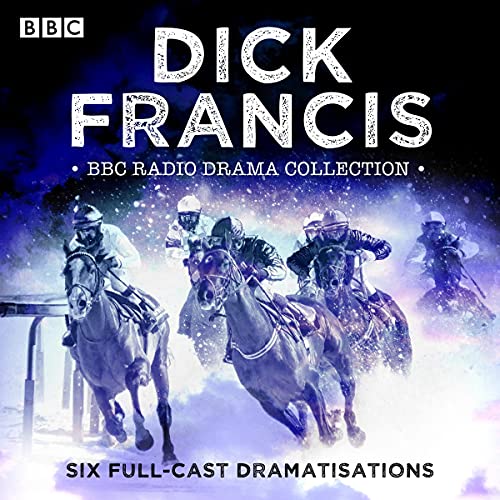 After riding the favourite into second place, jockey Kelly Hughes loses his licence. But he didn't throw the race and is determined to find out who framed him....

A cushy job transporting passengers between racecourses turns dangerous for pilot Matt Shore when his plane explodes and he's embroiled in a deadly plot.

Abducted by masked men, Neil Griffon is faced with a deadly ultimatum - obey the instructions of a ruthless crime czar, or risk the destruction of his father's racing stables.

Disabled ex-jockey turned investigator Sid Halley is faced with a triple threat when he is asked to guard a horse, probe a suspicious syndicate and find a swindler.

When a party to celebrate the success of the racing season ends in tragedy, wine dealer and amateur sleuth Tony Beach investigates.

Asked by a princess to fend off a dangerous cousin who is making threats, Kit Fielding agrees to help. But he also has problems of his own to deal with....

Among the casts of these six action-packed adaptations are Bill Nighy, Nigel Havers and Siân Phillips.

Also included is a bonus episode of the Radio 4 series Great Lives, presented by Matthew Parris, in which Francis's biographer Graham Lord, chairman of the British Horseracing Board Martin Broughton and racing correspondent Jonathan Powell explore the life and work of the champion thriller writer.

Please note that due to the age of some of these recordings, sound quality may vary.

very hard to listen to... volume up, down, all around no consistency...I get it was diff ppl reading but really hard to follow ...some so low you crank it up to even hear then they blast your ears with music...not happy...I want to hear the stories. but I want my credit back also....

Overall I enjoyed this collection especially as at least 3 titles are not yet available standalone on Audible.. However I found the voice volumes very uneven and often too soft to really hear. Sound effects often overly loud. The chapter/part headings annoyed me...why the repetitive titles and performers, not to mention the very long and loud music.

There were some very interesting story edits especially in 'Proof' which I failed to see any great purpose in..

If you already know the Dick Francis novel, you can make sense of the broadcast but it feels very shallow. If you do not know the novel, you will have a difficult time even understanding the plot.

I discovered Dick Francis along with the proliferation of sports gambling in the US. His stories center around the British horse racing scene that I've learned has been around at least since Wodehouse. The novels are very good and the radio adaptations are fun too. From the first radio play to the second you can hear the differences in production, one very starched collar, the next Miami vice in the rain. Highly recommended.

Good stories, good actors. A nice way to spend your alone time. These are all about horse racing, but then you learn something that way too.

Lots of stories included, with only minor adjustments to plots and very well done. The included Hret Lives was interesting

I just didn't like the format of this book. There is Too much background noise, so I won't listen any more!

First class storytelling as ever

Love the drama and brilliant of its time acting and accents. Some greats of the 60’s and 70’s British acting elite come together to tell the gripping and first class stories from the one and only, master of the racing thriller, Dick Francis.
A riotous read, racing along at a flat out gallop. Brilliant.

What a wonderful package of delights, such a cast and stories that hold you enthralled. A must !!

Some of these were better than others, but overall they all seemed a bit dated. There was also quite a bit of unconvincing acting throughout.