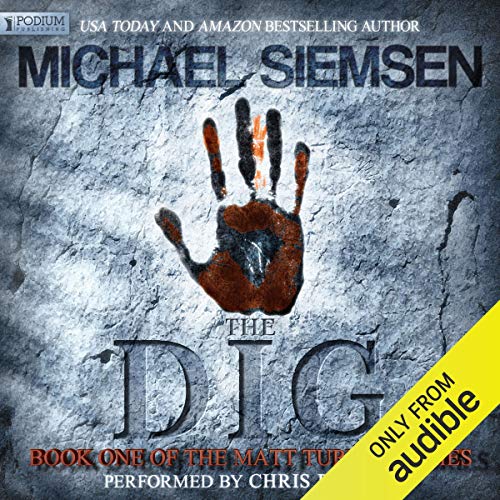 A mysterious woven metal artifact is found at a paleontological dig in Africa. Mystified experts, confounded by the impossible timeline they get from traditional dating methods, call upon a stubborn young man with a unique talent. Matthew Turner's gift is also his curse: When he touches any object, his awareness is flooded with the thoughts and feelings of those who touched it before him. It is a talent that many covet, some fear, and almost no one understands. Despite being exploited as a child and tormented by the unpleasant experiences imprinted on him from the various items he has "read", Matthew agrees to travel from New York to the forests of Kenya. There, threatened by unknown enemies and helped by a beautiful but prickly ally who begins to understand his strange ability, he journeys back in geological time to make a discovery so shocking that it forces us to rewrite all human history.

Would you listen to The Dig again? Why?

Yes. The two intertwined stories hold your interest and the concept of a far pre-historic metal working civilization opens the door to a million questions and probably future books by the author. The book is well written with interesting characters and you really can't ask for much more.

What other book might you compare The Dig to and why?

I would compare The Dig to any one of a number of Steven King or Dean Koontz books. Interesting paranormal ability are their stock in trade.

I would love to see where the author takes this concept. Hopefully he'll come up with answers to the many questions I have about this pre-historic civilization.

9 of 9 people found this review helpful

I can't wait for the next book!!

Would you listen to The Dig again? Why?

Yes I would! Its a great book, well written, good story, and chilling end!

The Dig keeps you caught up in its web from beginning to end! A very satisfying read!

7 of 7 people found this review helpful

What did you love best about The Dig?

Loved the story, it was very original.

I don't think I have but he did a great job!

nothing extreme but it stuck with me even when I wasn't listening I was thinking about the story.

What a great surprise and I hope there will be more like this.

6 of 6 people found this review helpful

What did you love best about The Dig?

How things are used to motivate people, no one is exactly as they seem to be

Both with ups and downs full range of emotions

Look forward to the next book and their next adventure

6 of 6 people found this review helpful

Yes, just a good fun read. It is nice to see someone with a 'super power' that has serious draw backs, where the small details and details are considered.

Which character – as performed by Chris Patton – was your favorite?

Matt was the most developed, I look forward to hearing the others if the sequel comes to Audible!

I pretty much did. Until it reached 5am and I just had to go to sleep. Finished it today though!

Highly recommended, I hope more of Michael's books come to Audible so I can listen to them all. I am interested to see if the characters in both his different series 'feel the same' or if they really do feel separate.

13 of 14 people found this review helpful

Michael Siemsen's "The Dig" beats the last contemporary Science Fiction I read, "14" by Peter Clines, by a mile. He has created a uniquely gifted character, whose ability to touch an item and go back to emotionally charged moments that happened while the item was in use... is a gift and a curse. It has made his a millionaire at age 23, and a prisoner of his own OCD type protective needs to be able to function. Obviously you have to suspend disbelief... but I did it once and rode around nicely in his world without being jarred out. I consider it a brain in neutral, have fun read and the writing is basic plot driven, nothing to get excited about, the plot is just so unique it makes up for the writing. I could see it being a movie. It will obviously be a series, although this stands alone, and I'll probably buy the next. Very little swearing, a little kissing, some violence... but a page turner that flashes from a previously unknown tribe to the archeologists seeking to unearth the remains. Probably will appeal to a young male audience the most, but I am the opposite and found it enjoyable. We will hear more about this book.

19 of 21 people found this review helpful

What made the experience of listening to The Dig the most enjoyable?

I love the interweaving of the Past with the Present.

Matt because he is so Intense

Which character – as performed by Chris Patton – was your favorite?

be careful who you turn your back on!

Don't forget to bring your gloves!

I would, if you were into archelogocial speculative fiction. Interesting idea, but the characters were somewhat flat for me, aside from the principal Matt.

The creativity of the ancient world.

The introduction to the new/ancient world.

Did The Dig inspire you to do anything?

Read more from this author.

Seems like a set up for a series, but can stand alone. Just be ware. On balance, and entertaining read.

Quite The Enjoyable Story

This book was one of those rare books where I was dreading the end but not because the story was bad or something bad was to happen, I wanted the story to keep going. I could not put this book down. I listen at work when the situation allows and two days running I made it home in the morning only to sit in the car an extra 10 minutes to keep listening.

The author has a very good writing style. He kept the story moving along and he kept me interested. I often speed up the narration to get through the boring parts in a book but I was finished with this book before I noticed that I had never even thought of changing the narration speed.

The concepts in this story can keep the protagonist busy for at least 2 more books in my opinion. I really hope the author continues this storyline.

9 of 10 people found this review helpful

I wasn't bored and didn't resent spending the time. I kind of liked the characters and think the guy managed a decent sense of place. The story was modestly interesting. It is the essence of bland.

If you are having trouble finding something to read, this will get you through to the next time in a pleasant manner. If you are torn between this and something else, choose something else. It will pass the time pleasantly but that's all.

The story is a little slow, way too much detail in parts. The hero isn't entirely likeable and I usually enjoy this, but the characters generally feel two dimensional. I can live with this in a faster paced story but in a slow paced tale I would prefer more relatable characters.

The narration is excellent and if it's the same narrator in the next two books I will definitely give them a chance.

2 of 3 people found this review helpful

No. I found it too slow and probably won't finish listening to it.

I thought the main concept, that someone could though a mysterious sixth sense read the minds of people who previously handled an artefact, was potentially very interesting. The ancient civilisation (which may have been aliens - they clearly aren't human) got quite boring for me, with long descriptions of their clothing, habits, surroundings, etc.

What aspect of Chris Patton’s performance might you have changed?

The accents, whether English, Australian or Kenyan, were all a bit unconvincing. This made the story much less credible.

Could you see The Dig being made into a movie or a TV series? Who would the stars be?

Yes, I can see it as a movie or TV series. The stars would be adolescents and they would also be the target audience..