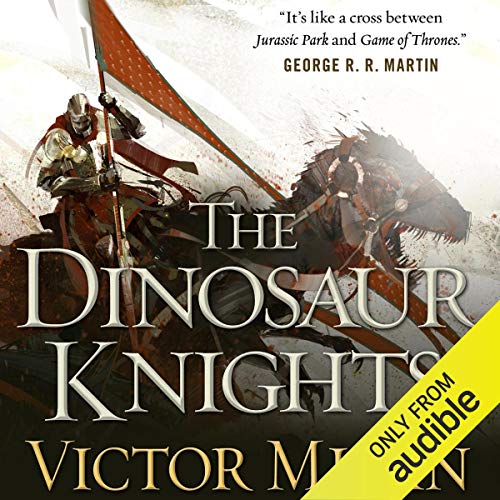 Paradise is a sprawling, diverse, often cruel world. There are humans on Paradise, but dinosaurs predominate: wildlife, monsters, beasts of burden and of war. Armored knights ride dinosaurs to battle legions of war-trained Triceratops and their upstart peasant crews.

Karyl Bogomirsky is one such knight who has chosen to rally those who seek a way from the path of war and madness. The fact that the Empire has announced a religious crusade against this peaceful kingdom, that the people who just wish to live in peace are anathema, and that they all are to be converted or destroyed doesn't help him one bit.

Things really turn to mud when the dreaded Grey Angels, fabled ancient weapons of the gods who created Paradise in the first place, come on the scene after almost a millennia. Everyone thought that they were fables used to scare children. They are very much real. And they have come to rid the world of sin...including all the humans who manifest those vices.

the idea of dinosaur knights is probably one of the coolest ideas one could have. unfortunately this story is really dull. even the battle scenes are just ok. personally this dinosaur knight idea I think works best as artwork, comics or a movie. thr book had alot of unnecessary swearing that felt out of place and some sex that was gratuitous.

When I first heard the sample for book one, I was worried about the the narrator’s, Noah Levine, voice. It sounded robotic. Don’t let that scare you off! Within the first chapter I was used to his voice. He put far more inflection in than what was shown, and his accents are incredible. I would say he performs more than reads.

As for the books, I’ll start with my complaint so I end on a good note- Milán can be incredibly repetitive. I didn’t like it in the first book, and it was getting to be distracting in the second book. One example is repeating a description. An example that comes right to mind is “The king loves his two daughters... when he can be bothered to remember he has them.” I’m confident in saying that at least 4 characters thought the same thing at different times. Plus the book “narrator” mentioned it as well. Other examples include how he reminds the reader that “their mount, not a sword or lance, is a dinosaur knight’s greatest weapons” at least one time per battle, explaining what the terremoto is, etc. He also gives constant recaps. The storyline is creative and complex, yet I didn’t get the chance to follow it for myself. He re explained who characters were and retold stories from earlier in the book constantly. Most of those conversations took place as an internal dialogue. I actually felt bored hearing what were initially compelling stories as time went on. Milán needs to rely on his reader’s memories more.

Ok, on to what I enjoyed. As I said above, the storyline is incredibly creative and somewhat complex. That is why I still gave the story five stars, despite the complaints above. There are plenty of characters, and Milán does a good job rounding them out. I also now know that I am a dork for dinosaurs. The concept of a knight on the back of a T-Rex alone what caused me to purchase the initial book. I hope he continues to write books, because I will happily buy them. I just hope he or his editor becomes stricter about brevity as I addressed above. Though truth be told, I have room for improvement in that area as well; this review is proof.

All in all, great work from the author and narrator.

This book was fantastic. You really root for the main characters. The author does a fantastic job incorporating dinosaurs into realistic world-building. if it weren't for that I would have given it 2 Stars for some of the sexual content. it was definitely too much. but if that doesn't bother you, or you can get passed it, you're in for a really epic story!

Meh - but dinosaurs are awesome

Narrator was robotic. Mispronounced too many words to count. Dudes riding Dinosaurs however are awesome

One of my new favorite series! awesome narrating.

Really fun read with some of the best narrating I've heard in a long time. So far the second book is my favorite but I'm starting the last book immediately. I love the world he created in this series and how he describes it puts you right in the story.

a very action packed and emotionally engaging sequel. Some description is lost, but the characters have been developed to the point where you just want to ride this train to its incredible destination.