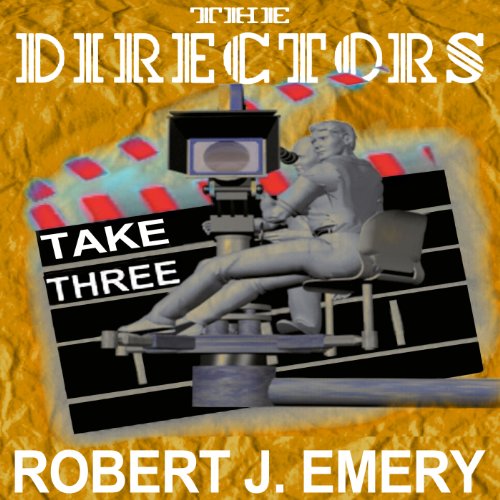 The Directors, Take Three offers dozens of masterful insights on the craft of directing from such renowned filmmakers as Robert Altman, Wes Craven, Alan Parker, Tim Burton, Steven Spielberg, and Barry Levinson. Here are details of their experiences making a variety of classic films from Nashville to Nightmare on Elm Street, Rain Man to Raging Bull, and Pee Wee's Big Adventure to Schindler's List.

Robert Altman and Martin Scorsese are just two of the revered directors profiled in Robert J. Emery's revelatory The Directors: Take Three. An award-winning author and screenwriter in his own right, Emery guides the listener through these masters' formative years, illuminates their artistic processes, and offers humorous behind-the-scenes anecdotes from their major and minor works.

The expansive, cinematic quality of Steven Menasche's voice suits the subject matter perfectly, and he adroitly captures the brilliant, eccentric, and colorful nature of these legends of cinema.

What listeners say about The Directors

The performance should have been more conversational. It's robotic and patronizing while reading text that is very conversational. English is my first language. I don't need someone to read conversational text this carefully, over enunciating every speck of it. You're not defusing a bomb. Just read it.

Maybe this style of narration works for some people, but it almost wrecked the book for me. The performance is so robotic and over-enunciated that it comes off as patronizing and almost sarcastic. I almost stopped several times because I couldn't stand the performance. It was probably directed this way, which makes me wonder, does the director of this recording ever actually listen to people talk? Can he stand listening to this, and expect listeners to take numerous hours of this over-exaggerated insanity? Was this done on purpose?

Once I was sufficiently numbed to the performance and resigned to finish the book, the stories in it are actually quite good, and well worth it for those interested in directing.

Would you consider the audio edition of The Directors to be better than the print version?

I have no point of reference to compare it to the printed version, however, I will say this: I am not a frequent purchaser of audiobooks. I typically prefer to buy printed copies, so I can read at my leisure. With that said, I found this audiobook to be immensely enjoyable. I've been wanting to read this book since it came out and just never found any quiet reading time, so I took a leap of faith and bought the audio version. WOW. Pleasantly surprised? You bet. Future purchaser of audiobooks? Absolutely. I consider myself a total convert.

Yes, yes, I can hear the snickering now: "I'm surprised you didn't referred to it as Books on Tape." Okay, so I'm a little behind the curve sometimes – like, 25 years behind the curve. I may even try this thing called the "Internet" sometime.

Anyway, my point is with my limited time, I've come to realize that audiobooks are the way to go. I work in the creative industry doing a lot of post-production (i.e. lots of time in front of a computer), so as it turns out, it's very appealing to be able to "read" a book while I work. Nice!

I'm a huge fan of Martin Scorsese, Clint Eastwood and Steven Spielberg, so how great is it that they're featured in this volume! LOADS of wonderful insights into their creative processes. It's like have coffee with these film-making masters!

I particularly enjoyed Eastwood's comments about the making of Unforgiven. How cool is it that a filmmaker of his stature would admit to reading a script, begin to re-write it, then realize his first instinct was wrong? He went back to the original script. This is particularly helpful to me, as a creative person, to know that even the masters make the wrong moves sometimes.

Which character – as performed by Steven Menasche – was your favorite?

I really enjoyed Steven Menasche's telling of how Spielberg got his start in movies. Not your typical film background. Attended Long Beach State, which didn't even have a film program and drew on his inspiration of, as a kid, shooting 8mm and 16mm film of his Lionel trains. I'd heard these stories about Spielberg before, but Menasche really brought them to life. There is a very human quality to his reading and I'll look for more titles that his done.

I didn't have an extreme reaction, because I don't think it's that type of book. I will say that I listened with extreme interest. I just purchased the book yesterday and I've listened to all 8 hours of it already! I guess this would be somewhat like a book that I just couldn't put down! :)

I have a feeling that Menasche is a stage actor. His diction is really good and he injects the written word with just enough emotion, without upstaging what the author has written.

Again, one of those books right up my alley. I love the behind-the-scenes stories and the inner-workings of how this film or that film came to be.

Some of the stories were interesting, others were simply “yeah, I liked the script and so we did the movie. Certainly nothing groundbreaking.

Had I known this book was nearly twenty years old (2003), I would probably not have gotten it. There are a couple of directors who had massive hits and important films AFTER these interviews were done.

One hang up I had was the authors need to include the fact that one or two subjects were short on time, so the interview was cut short. Ideally this would mean that the Emery could schedule another interview, but no.

A major qualm with this presentation was the horrible pronunciation of the narrator. Kenneth Branagh’s name is Bran-Nah, not Brannag. Anna Paquin is PACK-WIN, not Pah-QUIN. It’s just odd. But he was quite pleased with himsel when saying anything in French.

It’s a good thing this title was available for free via Audible plus.

What did you love best about The Directors?

Wonderful look at the the work of these fine artists!

I really enjoyed the chapters on Robert Altman and Barry Levinson - two of my favorite directors.

What does Steven Menasche bring to the story that you wouldn’t experience if you just read the book?

His performance was particularly engaging. I have listened to quite a number of audio books through various companies, and I have been involved in the recording of audio books through the Andrew Heiskill Braille and Talking Book Library in NYC. Mr. Menasche brings an authoritative and confident tone to his reading that many narrators in the field simply do not have. I don't know how much he actually knows about these directors and their work, but his narration makes me feel as though he was the real author of the book. He obviously really loves the material and feels deeply connected to it, OR, he's just a damn fine actor. Either way, his narration took the material in the book to a higher level of enjoyment for me because of his earnest, thoughtful delivery.

I look forward to hearing the rest of the series.

loved the director's view.... but the narration was a constant distraction. Beginner narrators are often told by friends and family 'Your pronunciation is perfect " so they think more is better. Manasche's constant over-articulation is grinding and time consuming to the point of being a big distraction.

A lot of celebrity names were mispronounced in this piece and the delivery was wooden, like he was reading instructions for how to put together a table. The info was great.

Also there were two major editing mistakes where the audio was playing over itself.

Interesting "behind the scenes" nuggets and ruminations of a successful film maker. God read or listen.

Narrator makes it hard to get into.

This narrator sounds like a fairly well programmed computer text reader. The stories are good, but he sounds stilted and bored.

Exception stories about some incredible people

A wonderful book well worth the read.
I took great insight into many of these Filmakers and gained a broader understanding of so many things relating to directors, actors and the art of producing films.
I recommend this audio book to anyone interested in film.