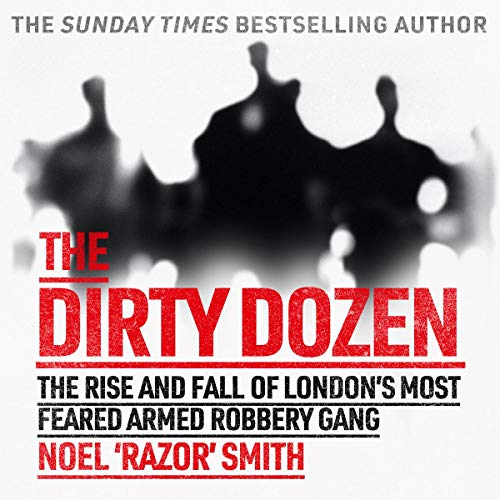 The true story of London's most prolific armed robbery gang.

The average bank robbery takes around four minutes. The essential ingredients are ruthlessness, cunning and plenty of bottle. You'll also need a weapon, a disguise and a getaway car. If you have all those things, then you could go to work right now. The Bradish boys had all these things and, boy, did they go to work.

The 'Dirty Dozen' were a ruthless federation of criminals who ran the armed robbery game in London for over a decade.

When charismatic leader 'Gentleman' Jim Doyle was jailed, the innovative but violent Bradish twins, Sean and Vincent, stepped up to take the throne. Hardened by a life in London's most lawless corners, they recruited a tight-knit crew to forge a reputation as the brutal kings of their underworld trade.

Banks, security vans, post offices, travel agents - anywhere was fair game and nowhere was safe. With endless money at their disposal, the gang spent freely on cars, drugs and decadence. Life was good.

But with the Met's tough-as-nails Flying Squad hot on their heels, a member of the inner circle cracked under the pressure and turned grass - and so began the thrilling chase-down of the Bradish boys and their illicit empire. The Dirty Dozen is the real story of the rise and fall of London's most feared crime syndicate.

What listeners say about The Dirty Dozen

Loved it best from Audible as of yet, one of the characters son use to play for our Sunday side and the narrator was spot on.

enjoyable book, I liked the fact that there was balance and not just glorifying the criminality.

An interesting , well written and very well read book , revealing insights into the mad world of these armed robbers.
However
He whined on time and time again about how unfair the Flying Squad were in shooting dead these well armed , dangerous thugs who stated that they were prepared to open fire on anyone who threatened their liberty. How like people completely outside of the law who think they're being treated unfairly by the justice system. They want to dish out violence but expect everyone to be fair with them. Hypocrites.

Karl Jenkinson is great again as the narrator. He could make a Noddy book sound sinister!

this is my 3rd time and still enjoy the antics even tough unlawful , but the author makes it so you can laugh, learn and thank God it wasn't you. you get all the crime and do none of the time

thank you for the great book

I love this kind of genre anyway, geezers, cockney gangsters, bank robberies. right up my street, John! . I was glad that the writer did the prologue and epilogue, it added something to it, though the narrator was a spot-on choice. For the most part, he played it fairly deadpan, which meant that when he came up with the occasional unexpected and deadpan cockney rhyming slang, I was falling about laughing. If you like this kind of scene or content anyway, this is a must buy. I've already bought the next one with this narrator reading.

Far better than I thought it would be

I didn’t think I was going to enjoy it, I do love British gangster films but to listen to an audible book about true life British crime, I really didn’t think it would give me what I like from the types of films. Of course this isn’t fiction but get across to the reader that it doesn’t pay to do armed raids etc. I liked that the narrator had a very similar accent to the actual author and had a British eastend accent which helps a lot when getting the reader to really get into it and then absorbs you

This was brilliantly told. Very graphic & disturbing at times but it did give a terrific insight into the crimes & their perpetrators.
It held my interest throughout

A Behind the Scenes

An interesting look "behind the scenes" at a small segment of the London underworld by someone who would know.

This was very interesting as to how criminals and police worked during the 70/80. Can't imagine living a life like that. Narration easy to listen to. I 😉 this kind of genre.