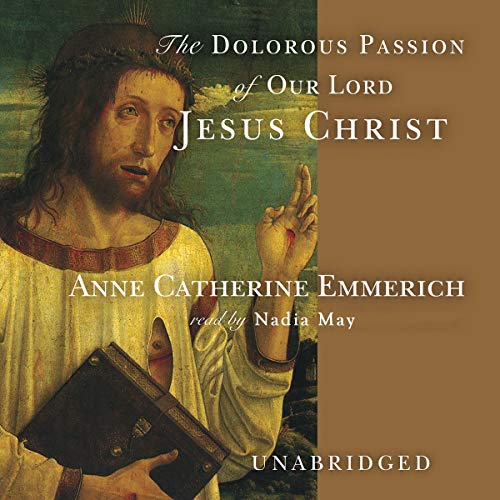 The Dolorous Passion of Our Lord Jesus Christ

Anne Catherine Emmerich was born in Germany in 1774. As a child she believed that angels, saints, and the Holy Family visited and talked with her as she worked in the fields. At twenty-four, she had her first mystic vision of the sufferings of Christ, accompanied by stigmata and bleeding as if from the crown of thorns. At twenty-nine, she became an Augustinian nun and continued to have visions and stigmata. In her visions, she recounted scenes from the life of Christ, which she seemed to have witnessed. These phenomena brought her fame and investigation by both science and the Church.

This book was one of the sources for Mel Gibson's motion picture, The Passion of the Christ.

Good for meditation on the Passion of our Lord Jesus Christ. I have the hard copy too and the audible it's true by each word of the book.

The commentary was easy for me to understand and gave me a very good understanding of Jesus's human will and desire for all mankind. He was God, made man that gave us all the gift of salvation and eternal life with him in Heaven, through his teachings and ultimately his passion and death. I now understand the tremendous pressures, true love, and devotion that His Mother "The Blessed Virgin Mary" had for her Son. All of the apostles doubts, frustrations, and human frailities that I have never really considered as a part of their true nature. They were real people in a different time and place that seemed too unreal to imagine or believe. Toward the end in part 2 gives an understanding of Adam and Eve's sin, explanations of Judas desires that led him to betray Jesus, and various other information that I would have never known had it not been for this book.
This narration of the passion and death of Christ is a very cruel and real but humbling experience, yet still gives a great feeling to me that even though Christ died for all of us and our sins, to have the opportunity for everlasting life with Christ in Heaven is the greatest gift of all.

Mel Gibson took his movie from this

Loved it.its really fascinating to listen and read the passion as told by one visionary Saint,I listen to it over and over and will listen again tonight.Then if lucky I dream about Jesus.

Great book. Have heard it over many times.

it's hard to keep in mind that this is not infallible revelation or an eyewitness account of the passion. The translation and the narrator combine to make it read like a simple English peasant lady relating her experiences down at the market one day (even though it was written in German by an educated German mystic). The details are so realistic and the events are related in such a way as to bring a real human touch to the Gospel narratives which are sparse and officious by comparison. But if it's not true revelation or an eyewitness account what good is it? There is much to be gained from this book. It is very helpful in bringing the story to a touching level of human connection. It makes the Gospel narration much more realistic and much more believable by filling in the details and the almost embarrassing human nature displayed by all the characters. The day of Christ's resurrection, for example, was a chaotic mess. Of course it was! it had to have been, but I never realized it before. there are many moments of insight like that. It is a worthwhile read.

Listened to whole book while working, and it made my few days listening very thoughtful and contemplative. Wonderful narrator, very easy to listen to and her style of reading flowed so well with, Blessed Sister Emmerich's, that it made the entire experience very enjoyable and natural. Such a very spiritually enriching book, not for the faint of heart. But those who have an interior want to devote more meditation on the Passion of Christ, this is the book for you.

Once again, Wanda McCaddon steps all over a good book. In this car crash, her insidious inflections cast doubt on the writer's "dreams" and I'm not referring to her attempts to dramatize voices of various characters. It's clear she doesn't believe a word she's reading, thus defeating the author's purpose in sharing her incredibly unique accounts of being an eye-witness to the last days of Christ's life on earth. Such a shame McCaddon dominates so many audio book jobs because, in my opinion, she never, ever does a book justice. Another woman's name was listed on the thumbnail art as being the narrator and it's a shame that version, whether good or bad, was not given a chance within Audible. might have made all the difference....

Narration added to the spiritual enjoyment of this book. Will listen to every Holy Week!

Fantastic aid to meditation upon he Scriptures

I look forward to reading Bl Emmerich’s visions of the Old Testament and of Mary. Great stuff.

What a wonderful vision of the passion and resurrection of the spotless Lamb of God. The love of Christ comes to life. His compassion for man and his mother has never been more powerfully presented. God bless Anne Catherine Emmerich and have mercy on we sinners.

Highly recommended for wonderful insight into the times and passion of Our Lord Jesus. A must!

Fascinating details of Our Lord's Passion

The visions of Blessed Emmerich provides a rich and detailed account of events before during and after the first way of the cross.
The narrator spoke a little too fast at times, nevertheless gave a moving account.

A powerfully imaginative meditation on Our Lord's Passion, Death and Resurrection. It's easy to see why this book inspired the making of The Passion of the Christ movie. Biblical characters are described vividly in these reflections on the Passion as well as the supernatural happenings that accompanied the historical events described. The performance of the reader was something I had to get used to but, in the end, really appreciated because it was almost conversational and not stilted in any way.