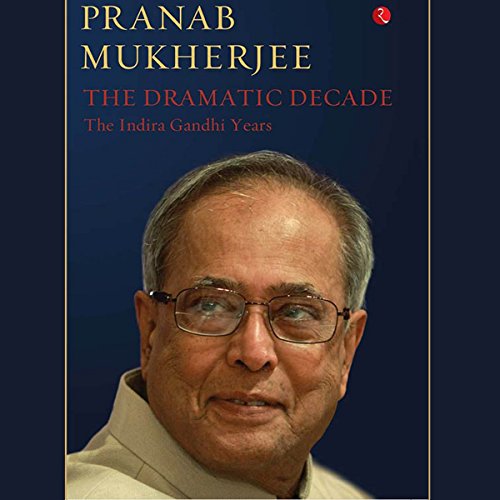 The Dramatic Decade focuses on one of the most fascinating periods in the life of this nation, the decade of the 1970s. This was when India found herself engaging with the true meaning of democracy. The nation displayed her commitment to liberty by extending full support to East Pakistan s struggle for independence. Later, between 1975 and 1977, during the Emergency, she found herself grappling with the limits of personal expression. Finally, in 1977, India saw the emergence of the politics of coalition, with the Janata Party an amalgam of Indian parties opposed to the Emergency, comprising the Congress (O), the Bharatiya Lok Dal, the Jana Sangh and the Socialists, coming to power. This was a turning point in the history of the Indian legislature.

This was the decade when Pranab Mukherjee committed himself to the role of a political activist. As one of the keenest observers of and participants in this dramatic decade, Pranab Mukherjee s insights are invaluable. Indeed, he nudges our impressions of the 1970s. For instance, recounting the urgent appeal for Indira Gandhi s midterm resignation, he asks which democracy in the world would permit a change of a popularly and freely elected government through means other than a popular election. Can parties beaten at the hosting replace a popularly elected government by sheer agitation? Was it not prudent for those who were determined to change the government to wait till the elections, which were but around the corner? Does the rule of law mean that the remedies available to the common man are to be denied to someone holding an elected office? How could anybody replace her when the overwhelming majority of Congress MPs, with a two thirds majority in the Lok Sabha, resolved that Indira Gandhi should continue as the party s leader in Parliament and thereby as the prime minister of India?

Drawing from personal diary extracts, conversations with key players of the 1970s, and vital secondary literature, Pranab Mukherjee presents an exceptional portrait of a complex nation.

What listeners say about The Dramatic Decade