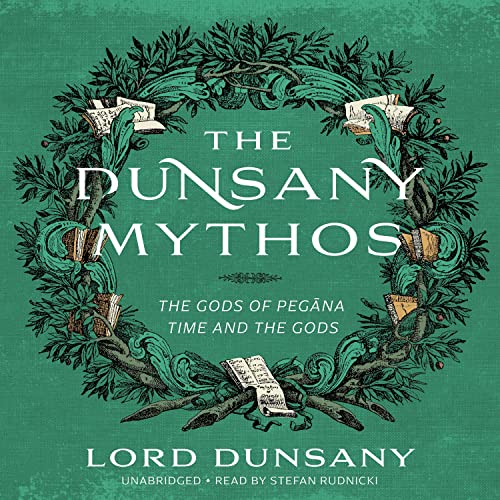 Created by Skyboat Media for Blackstone Publishing, The Dunsany Mythos features the complete contents of The Gods of Pegāna and Time and the Gods in a single audiobook edition.

“In the mists before THE BEGINNING, Fate and Chance cast lots to decide whose the Game should be; and he that won strode through the mists to MANA-YOOD-SUSHAI and said: ‘Now make gods for Me, for I have won the cast and the Game is to be Mine’. Who it was that won the cast, and whether it was Fate or whether Chance that went through the mists before THE BEGINNING to MANA-YOOD-SUSHAI - none knoweth.

"Before there stood gods upon Olympus, or ever Allah was Allah, had wrought and rested MANA-YOOD-SUSHAI.”

So begins The Gods of Pegāna, the first book by influential fantasy writer Lord Dunsany. In a series of short vignettes, Lord Dunsany invents a pantheon of deities who dwell in Pegāna and chronicles the history of their imagined universe. It was followed by a further collection, Time and the Gods. In lush language and dreamlike prose, Lord Dunsany’s talents are on full display as he lays the groundwork for the fantasy genre.

“There hath been no rumor of it - I alone have dreamed of it, and I may not be sure that my dreams are true.”

Dunsany’s masterful works of comparative mythology inspired authors from H. P. Lovecraft to J. R. R. Tolkien to Ursula K. Le Guin, and these tales are a necessary part of any fantasy collection.

What listeners say about The Dunsany Mythos

For those who long for myth & lore

As though the mists of time have parted the invitation to attend the old and be introduced to the new. The old and the new- they are the same. So come to the old world & witness the making of our elemental atmosphere through archetype examples of the great and terrible and beautiful breaking of Gods you forgot that you knew.

Here the Magic & the fool play with instruments and. Moons. The winds are called, caves hold more than darkness & the wise will hear the beauty that lies beneath that Fable artfully weaves the might of our world with the creation of our imagination.

I found the language comforting. I smirked and smiled that one of my kindred took the time to sing to my soul.

Bravo Lord Dunsany - I can barley wait for the next volume.

Encore Stephan Rudnicki - the depth of your baritone vibrates a place in my chest that tickles my soul.

Thank you for the escape. I found my smile in this old new world;)