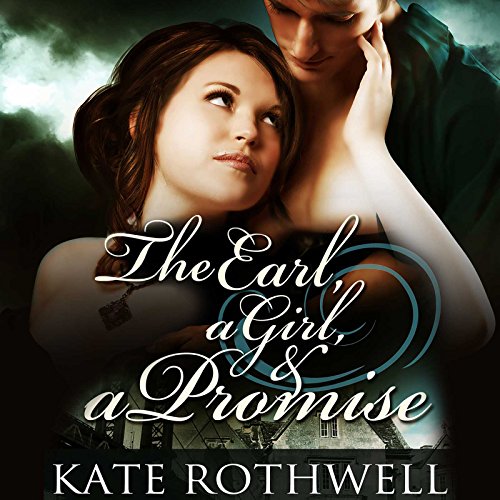 When a nearly naked woman crashes into his arms, Paul, the new Earl of Latterly, knows he's left his monk-like world behind. Raised apart from females by his misogynist father, Paul hardly knows how to speak with the delightful girl who's dashed out of the dance hall. But in a single night's tryst, they discover a passion he's long denied himself. Yet to his dismay, he learns Emma is the adopted sister of the very man he seeks: the true heir to the earldom, Paul's ne'er-do-well cousin.

Although she's tried to escape her free-loving mother's reputation, Emma consents to one night of lust...for a price. But as her heart falls for the stranger, she forgoes payment and flees into the night. Only to find Paul on her doorstep again, seeking her brother. And offering an inheritance that will change her family's lives forever.

Her rapscallion brother needs training to blend with the ton, and Paul needs Emma's help. Fear of becoming his eccentric father makes Paul skittish, and Emma's outré family keeps the waters well churned. But as Paul fulfills his promise to reveal the true heir, he and Emma must forge a new path to love...before their pasts rob them of true happiness.

Note: This book contains explicit sexual content and graphic language. It is hotter than most titles by Kate Rothwell.

What listeners say about The Earl, a Girl, & a Promise

I generally liked this story and thought the narrator did a great job. I will listen to it again sometime and I'd generally recommend it. I'm only leaving a review because I think some readers would want to know that some of the content may be upsetting. Though the author doesn't delve into detail and the events are all in the past from the main storyline, this story does feature child abuse and sexual assault. These experiences do heavily influence actions and thoughts of the main characters so they are mentioned a few times, but, as I said, in limited detail. I hope this will be helpful in case anyone else is sensitive to these topics to not feel

The Earl, a Girl, and a Promise

First I should say I was fortunate enough to receive a free copy of the audio book by Kate Rothwell and narrated. By Annie Aldinton. Ms. Aldinton gave a 5 star performance by fully bringing Ms. Rothwell's characters to life! I admitted that this book was a first for me as far as reading Ms. Rothwell's work and also by listening to books narrated by Ms. Aldinton. This story was a fast paced adventure with unexpected twists and turns landing it in a delightful recency style romance! The characters were well developed and had depth to their personalities. The plot held my interest and was unique to my past experiences. Personally, I very much enjoyed this book and look forward to reading more works by Ms. Rothwell and listening to more audio books narrated by the talented Ms. Aldinton. Easy to recommend this delightful audio book for all my friends.

Overall, the story was meh. I got through the audiobook but almost stopped part way through. I found the story lacking in any real substance. The whole book is the two main characters thinking that they can’t help their behavior because it’s in their genes. Despite the abrupt feel of the ending I was glad the book was finished.

The author didn’t really make me feel for the characters. I had a hard time caring for or relating to the characters. The mother of the heroine was the most likable character in the book, but she had a very small role in the story.

As for the explicit sex, I like my smut, but the sex just seemed gratuitous. It almost seemed like it didn’ fit, despite the fact that sex was a central topic of the story. There was no “feels” behind the sex for me - even that was meh!

This is an exciting and well done book. It had a lot of adventure and twists and turns.

What made the experience of listening to The Earl, a Girl, & a Promise the most enjoyable?

What a lovely audio book this was. The cover attracted me, but I was soon pulled into a wonderful story with a charming hero and strong heroine. I really enjoyed the narrator's voice as well. If you love Victorian era romance with clever wit and a good plot, this is the book for you. I've read a few of the author's books and loved them, but this is the first time I tried an audio book, and I'm sure it won't be my last. Great job by all involved!

The characters and time period.

What does Annie Aldinton bring to the story that you wouldn’t experience if you just read the book?

British accent that isn't hard to understand and sounds authentic to the time period.

Not to be missed!

some disturbing content discussed mostly as past events (abuse, violence, drugging, rape) relationship between the main characters is consenting.

I don't usually listen to American based historical stories. this contains both American and British characters and narration is in an English accent. so it's a good transition book if you generally prefer British based stories.

Best one I've read in awhile

I really love how honest the female lead is. She was a no nonsense kind of woman, which made me admire her so. I also really appreciate that her relationship with the male lead had lasted many months before the ending of the novel.

Emma was a lucky girl she didn't get tetanus. Paul must have had magic hands! So much not understood about psych issues in the 1800s. Paul and Emma are a couple destined for each other. Loved Rita and her kids and all are survivors . A little slow at times, but worth the it in the end. Love to read a further book on John and Rita!

Perfect combo of damsel in distress and independent capable female main character. Clever blending of late 19th-century of the American and English society.

Narration was not a fit for the story, and the story was only so-so. Narrator had hard swallows and was hard on the ears in some areas. I almost stopped it several times but pushed through. Not sure that was the best use of time, but at least I didnt use a credit.

The story was okay and the narration as well. But I thought it was a bit depressing, there wasnt very much romance in it. I think maybe the narrator made it sound depressing.

thank you for this free book, throughly enjoyed listening to this book, well done to all involved in this book 👏🏿👏🏿👍🏾👍🏾

will written and well read by the narrater.

Bit of a slow burner after the first few chapters but really enjoyed it. The only character I’d liked to have seen more of was Rita!

This was a fantastic storyline with humour, sadness, laughter. And all sorts of twist and turns and a good ending.

Pure tripe. It droned on and on about nothing. Awful American accents. I give 2 stars because I thought at the start it had potential but, nope, as it turns out, it didn't.

Kate Rothwell is a new author to me but I shall definitely be following her in future. The narrator was very good.

An interesting story. Accents took some getting used to, but fitted the story. Enjoyed it.

I held a soft spot for Emma who grew up poor and Paul, of a privileged background. Although both experienced a difficult upbringing, they matured into honest and good souls. Fate brought them together and they seemed well suited from the very beginning. You could not help but wish for love to triumph.

I really appreciated the author’s skill with conveying the emotions and reasonings behind their thoughts, behaviour and conversations. I’ve come across quite a few novels where less clever authors of this genre tend to repeat the same thing over and over again which becomes both annoying and tedious. As such, this story was a pleasant contrast.

There were some steamy moments but they too had their place and weren’t at all gratuitous. The narration was excellent. I recommend this story and am looking forward to discovering other novels from this author.

A delightfully different Historical Romance. l did not want it to end. Great characterisation and the narrator was wonderful.